Home News Motocross Video: Jeffrey Herlings back on a bike and flying at Lelystad 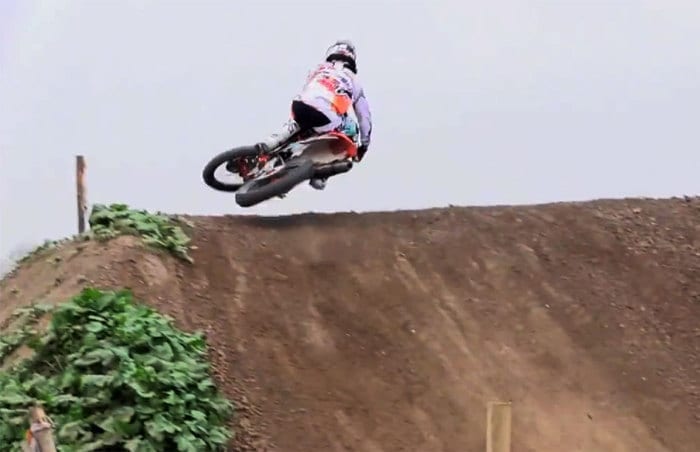 Jeffrey Herlings was leading the MX2 world championship before he entered the Dutch Open second round back in late March. But the two-time champion injured his shoulder in practice at Mill and shortly after the Red Bull KTM Factory team decided it would be best for Herlings sit out the GP round in Brazil.

The team likely took a long-term view that with Herlings 15 points ahead in the MX2 championship he could afford to miss the last fly-away round before the Grand Prix circus moved back to Europe.

Inevitably Herlings had to give up the red plate in Brazil with Arnaud Tonus finally putting his troubles behind him with his first GP win. This propelled Tonus to the top of the standings while Herlings dropped down to fourth.

The video below shows Herlings flying around Lelystad and it looks like the medical team have done a good job with his injured shoulder so we should expect to see him powering towards the front of the pack at the next Grand Prix race in Arco di Trento.

From what the ‘bullit’ has been saying on Twitter, he plans on being “faster, stronger and better” than ever – if that’s the case it’s not going to be fun for a lot of his title rivals.

No worries.. The Champ is back ☺️. Faster, Stronger and better then before. Mentally stronger too. This is a new beginning for me. Let’s Go!