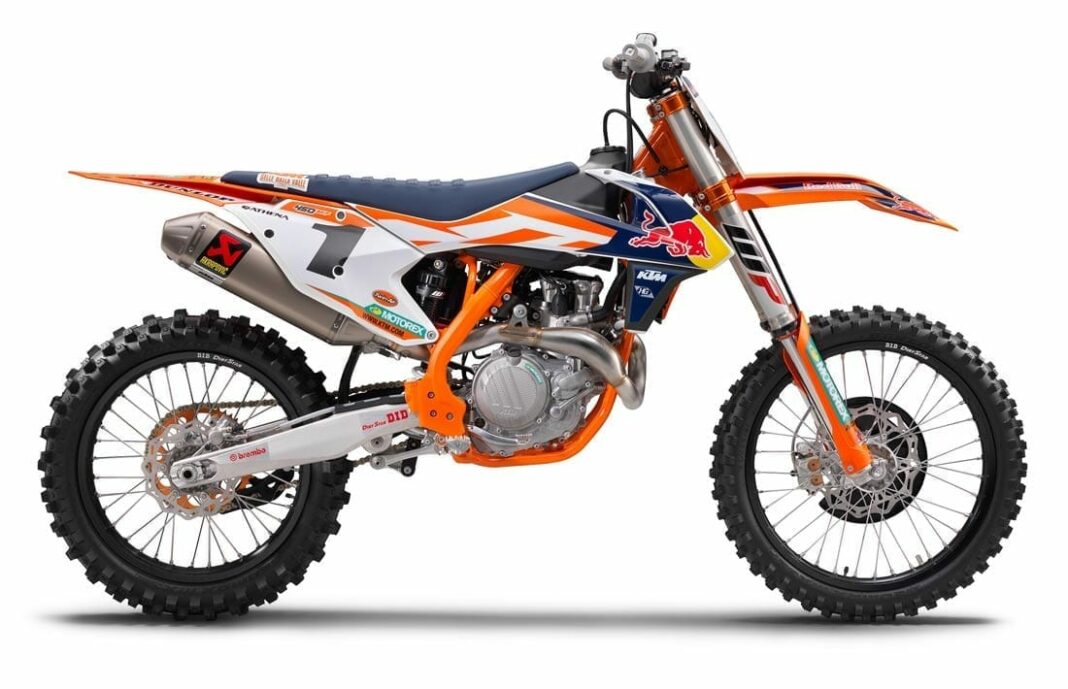 The two new limited editions mirror those of the 450 SX-F and 250 SX-F machines raced in North America by the Red Bull KTM Factory Racing and Troy Lee Designs Red Bull KTM teams, respectively, in the Supercross and AMA Motocross series this year.

The graphics are identical to those run by Ryan Dungey (450) and Jessy Nelson (250) and are exclusive to the Factory Editions and not available as PowerParts. Both bikes boast orange frames compared to the black of the ‘standard’ SX machines and identical seats as the race teams – right down to the Adidas stripes on the TLD bike. The 250 SX-F also gets an orange plastic subframe/airbox to make it a true replica.

Other changes include the use of DID Dirt Star black rims as opposed to Excel, a front brake disc guard, different grips and a Gold Regina racing chain connecting different gearing that includes an anodised orange final drive sprocket.

Performance wise, the 450 features a five-speed gearbox and sounds more ferocious through its Akrapovič titanium slip-on silencer. The 250 receives an FMF slip-on silencer, identical to that used by the team. Both bikes received revised fuel mapping to suit the different exhausts and the preference of the US riders.

Although the leading WP Suspension is identical to that of the standard SX models, they come READY TO RACE with a new setting and the WP AER 48 air forks are held in place with anodized orange triple clamps.

This is the first time US Factory Edition KTMs have been available in Europe and they are super limited to the UK, British Isles and Ireland, the bikes cost £7,449 and £7,849 – an increase of £600 and £650 over the stock bikes but with a huge array of additional items.