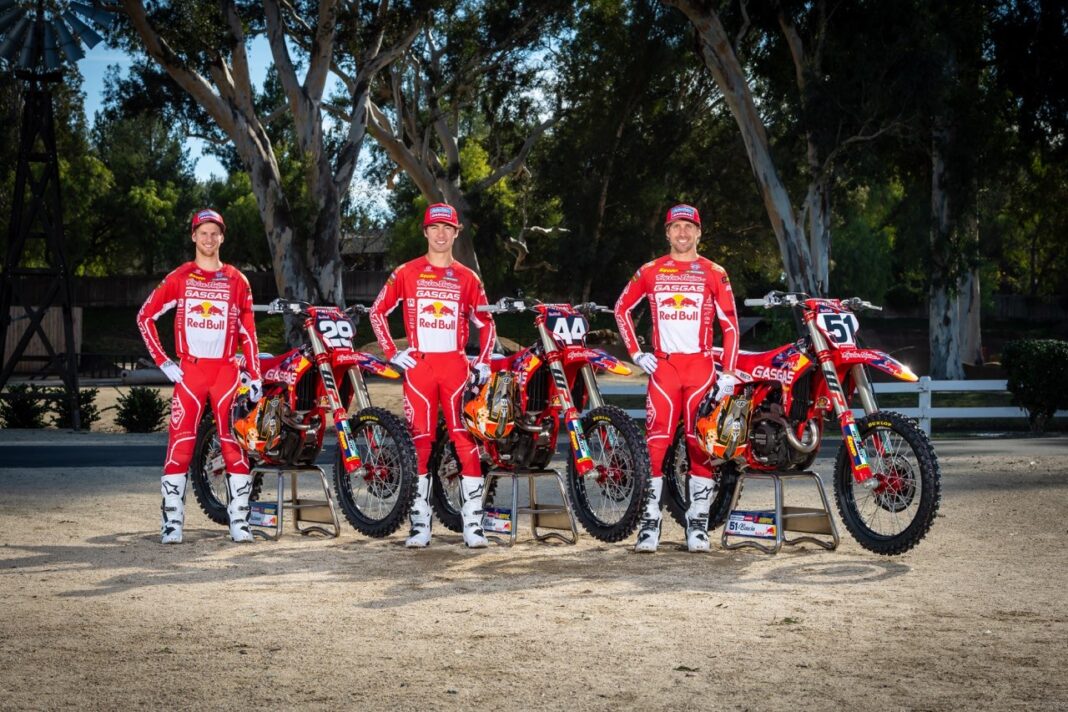 With the returning lineup of talented and well-seasoned riders includes Justin Barcia headlining our 450 effort on the proven MC 450F, and teammates Michael Mosiman and Pierce Brown piloting the MC 250F in the 250 division. With big goals on the horizon, the entire team is fired up to kick off racing in 2022 with the return of the iconic Anaheim SX on Saturday, January eighth.

With a solid year of experience racing – and winning – aboard the GASGAS MC 450F in 2021, Barcia heads into the new year with high expectations for himself and the team. Coming out explosive, in true fashion, at last year’s season opener, Barcia led GASGAS Factory Racing to its first win in the premier class at Houston SX, following it up with three more podium finishes in supercross. He etched another “first” for the brand outdoors, claiming victory at the Spring Creek National and ultimately making four additional podium appearances throughout the summer. Joined this season by highly accomplished race mechanic, Olly Stone, Barcia is feeling stronger than ever as he looks to be a permanent fixture on the podium in 2022.

Justin Barcia: “I’m really stoked for the second year on the team! The first year, we had so much fun and we worked really hard. We got two race wins, which was super awesome, but our goal is always to win the championship and that’s what we’re looking for in 2022. The team has changed a lot this year. I have a new mechanic, Ollie, which I’m stoked on; and we have a few other new guys on the team that are doing an awesome job. The whole GASGAS brand is really cool and it makes work a lot easier when you can have a lot of fun with the crew. We definitely have a strong team coming into this year and for me, I have my head down and working hard, having fun and ready to go for that championship!”

250 Riders with the 250SX series split into Eastern and Western championships, team riders Michael Mosiman and Pierce Brown are both super excited to divide and conquer from coast to coast aboard the MC 250F. Entering his fifth season in the class, Mosiman has experienced his fair share of podium and top-five finishes but the 22-year-old has his sights set on race-wins in 2022. With a constructive off-season behind him, Mosiman is fired up to battle for the championship in both 250 categories this season.

Michael Mosiman: “It’s my second year on the team and I couldn’t be more excited for the season! The new guys we have are really experienced and we’ve been having a lot of fun in pre-season. I’m really excited about the quality of riding that we’ve been putting in together and I can’t think of a bad day that we’ve had on the track. All of us have had some pretty good battles banging bars and it’s just been really fun. I’m just looking forward to the season, the comradery is better, the familiarity is better, the bike is better and all-in-all, we have a really well-rounded program and I think you’re going to see that in the results.” Lining up opposite his teammate in the 250SX class, Pierce Brown is ready to take on the 2022 season with a new race mechanic, Derik Dwyer, who brings years of championship winning experience to the relationship. The 19-year-old Brown had a break-out ride at last year’s Daytona SX, coming away with a career-first podium finish, but his momentum was short-lived after suffering a thumb injury at the next round. He pushed hard to bounce back for the outdoor season but he wasn’t able to put together a full season on-track. Feeling fit, fast and on the gas, Brown is aiming for a strong and consistent year in 2022.

Pierce Brown:“Everything has been going great this off-season! We have a couple new faces on the team – I have a new mechanic, Derik Dwyer, and a new trainer, Wil Hahn, that came along halfway through outdoors last season. With those two added to the program, I feel like everything is coming together and I’m really stoked! I feel like I haven’t been this prepared for a season so far in my career, so it’s shaping up to be a really good year. Everyone on the team gels super well. We ride together every day and go to the gym together every day so it definitely makes things easier when you’re having fun. I’m excited! We’re going to turn some heads, for sure!” With Team Manager Tyler Keefe in charge of the program for its second year, the team is stoked to welcome our new Crew Chief Josh Wisenor, who comes to GASGAS with years of top-level experience in the paddock. Additionally, race mechanics Olly Stone and Derik Dwyer complete a solid trio with returning wrench Jay Burgess and team trainer Wil Hahn will begin his first full season with the team in 2022.

Tyler Keefe:“Going into the second year with the GASGAS brand is very exciting. I think the first year went really well and we had some really good race results but honestly, we had a lot of positive momentum for the brand and for the riders. Bringing the fun back into our sport a little bit and getting creative on some marketing things has been fun and I think a breath of fresh air for the motorcycle industry and also for the Troy Lee Designs brand. Looking into 2022, having the same riders to build off of is exciting, and we’ve brought in some new crew members to help elevate the team, as well as our new trainer, Wil Hahn. We’ve been having a lot of fun and the whole team is working well together, so I think we’ll have some breakthrough races this year. The 250 guys are at a point to make a statement for themselves and solidify themselves as one of the guys to beat. Justin had a great season in 2021, so with him fine-tuning some things here and there, he’s going to build off that and try to be up front every single week. It should be exciting!”