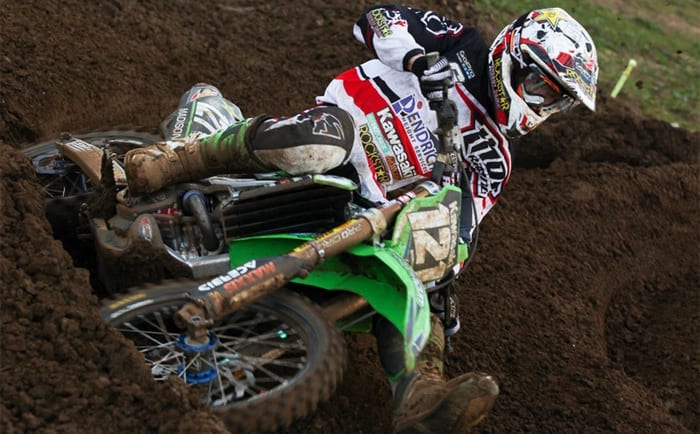 There’s been a lot of movement in the British motocross championships space lately. As a team, Pendrich Height Services Kawasaki has tried to support as many they’ve been able to fit into their calendar.

And as much as they’re sorry to see another championship go, the team still had the brand spanking new MX Nationals at Culham to look forward to. So trucking down the motorway they went yet again to pull into a track that looked fresh, different, and with more sunshine. What can be better than that?

Saturday morning, the team’s intrepid man in the Under 15 class, Lee Perfect, fired up his green hornet and put in a great qualifying time that gave him the tenth pick at the gates, while the two ‘old boys’, Bryan Mackenzie and Ross Rutherford, got a free practice session first before qualifying in 11th and 23rd overall.

For Ross, that’s where any idea of racing ended. During his qualifying session, a bad landing torqued his previously-injured leg, and after a check-up, he had to sit out the rest of the weekend on painkillers and crutches. He’s seeing a specialist this week to see what the damage is.

Bryan did not have the best of luck either. The Pro races are mixed and Bryan had a tough time on the track against the bigger bikes. The first of the weekend’s three races saw Bryan put in a consistent run that gave him third in the MX2 class.

In the second race Bryan had to come from the back after a crash in the first lap for a fifth in the MX2 class. The final race turned into a battle of man vs track. Mid-pack in the first lap, Bryan found himself moving up a handful of positions, ending the race seventh in the MX2 for a fourth overall on the weekend.

“I had a really bad weekend. I don’t know what it was, whether it was not enough time, racing conditions as rough as this or what, but all weekend I was fighting arm pump and it’s just been a drag,” said Bryan Mackenzie.

He added: “I never felt comfortable and I was fourth overall MX2, but it’s way off the mark for us; all I can do is put the work in over the weekend and come back in two weeks time at Lyng and show what I’m made of.

Lee on the other hand had a fantastic weekend. A solid start in his first race put him on a solid footing with an eighth place, while the second race of the weekend was cut short due to a red flag whilst he was in sixth place.

Refreshed after a good night’s sleep, Lee then proceeded to his third race of the weekend and upped the ante with another very consistent sixth place, and then finished the weekend off later in the day in eighth after coming back from a mid-pack start. All finishes tallied up to a seventh overall.

Lee Perfect said: “I came into the first round on Saturday with expectations of being in the top 10, went into qualifying and got into the top 10. I finished 8-6 in my first two races, which were really good, I was very chuffed with that, and then on the Sunday did the same again – got good starts, stayed consistent and tried not to crash. I did crash twice in the last race, once at the start and once on the last lap, but still came away with a top 10 and finished seventh overall!”

Team boss, Mark Perfect commented: “Qualifying this weekend was reasonable; we thought we were onto a decent thing, which was pleasing, but it gradually went downhill, and it just seemed a weekend where it was not just our team but other teams as well that just didn’t seem to find a funk on the track, it just wasn’t ringing a lot of bells for a lot of people.

“It was the case with Bryan as well; he just couldn’t find the right lines and just couldn’t get to grips with the track. In all fairness, that’s part of racing.

“On the upside, we had a good result with Lee who has been progressing nicely and getting results in the top 10, where sixth was his best result. We’re very pleased with Lee and he kept the morale of the team up.

“We had a spill with Ross as well in the MX1 class; he’s pulled his groin or his hip and we’re not entirely sure, so he’s seeing a specialist on Monday morning to find out the root cause. We hopefully will have him back on a bike fairly shortly. All in all to sum up the weekend, it’s a bit disappointing, but it’s the start of the season and we’re still in the hunt for the championship and it’s not over and done with yet.”