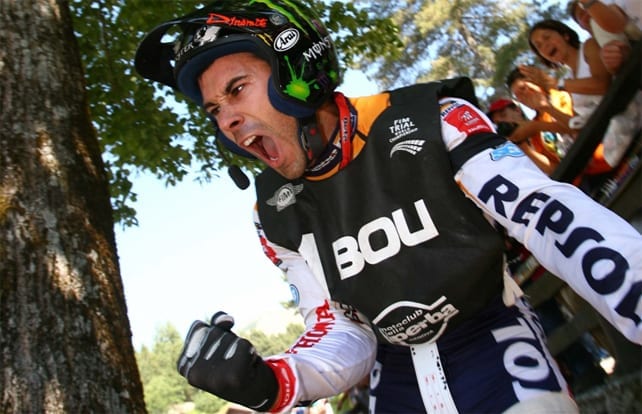 Repsol Montesa’s Toni Bou has taken his sixth consecutive World Trials Championship with one round still to go. The utterly dominant Spaniard never really looked likely to do anything other than win the title but still had to fight hard to overcome a strong ride from fellow Spaniard Albert Cabestany at last weekend’s Italian round of the series.

The bigger story when World Trials troops to British shores later this month for the last round of the championship, will be the fight for second overall in the championship. With his late season form, including a win in Andorra, Cabestany has closed the points gap and now sits joint second with Jeroni Fajardo on 160 with Gas Gas rider Adam Raga see-sawing his way through 2012 but still sitting on 155 points. Takahisha Fujinami took second overall at the Italian round to help grab Montesa its 15th World Trial manufacturers title.

Best of the Brits in Italy was James Dabill who began well on his first lap before a couple too many fives on lap two hampered a season’s best result. Dibs still managed to depose Fajardo for fifth overall though while Michael Brown and Jack Challoner fought each other for top ten positions, grabbing ninth and tenth respectively.

The final round of the 2012 FIM World Trials Championship comes to Cumbria over weekend August 28/29. More info at www.britishtrialgp.com