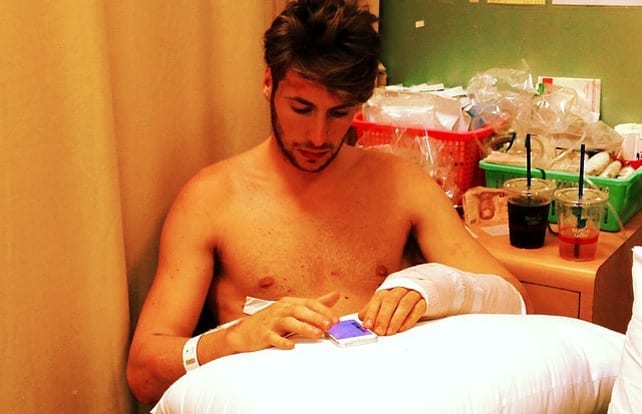 The good news is that Team CLS Kawasaki Monster Energy’s Tommy Searle is back home after a successful operation on his broken wrist in Thailand but his fans will be gutted to hear that he will be out of action now for six weeks. A replacement for the Grand Prix of Brazil has been found with Dutchman Herjan Brakke stepping in for the GP that takes place at the end of March.

The 24 year old Englishman was the most serious victim of the fuel dramas in Thailand and explained what happened: “The motor suddenly cut out when I was already committed to the triple jump. Many riders and teams had a problem with the fuel supplied in Thailand at the last minute by ETS after all fuel imports had been cancelled by the Thailand authorities. My team need to check what happened.”

CLS team owner Jean Jacques Luisetti added: “We are still waiting to have the bike back because it goes directly to Brazil, but we will make a complete check up as soon as possible to know exactly what happened and we will send a complete report to KHI. At this stage the team cannot comment further.”

Tommy was operated on in a Thai hospital at 6am Monday morning and was given clearance to fly back to England yesterday. The radius in his left wrist was plated and he will have further examinations today by his own sports specialist in England, but, on ther basis of the X-rays, the specialist has already expressed great satisfaction with the operation performed in Thailand.

At the moment Tommy is expected to be out of action for six weeks. Jean Jacques Luisetti: “All we can do to help Tommy make a full and speedy recovery will be done; you can imagine our frustration for everybody, and every kind of medical assistance with no limit will be made available; after he has met his own sports doctor, he will come to Marseille, where the team is based, because there are many facilities here … and sea and sunshine.”

Arrangements have already been made, in complete collaboration with his HB Gebben Kawasaki Team, for Herjan Brakke to ride Tommy’s bike at Beto Carrero in Brazil on March 30/31. The 25 year old Dutchman from Staphorst, who finshed 21st in the world series last year despite racing just six GPs, is committed to contest all MXGP races in Europe for HB Gebben Kawasaki this summer, but both the rider and his regular team were delighted to accept this opportunity to add the Brazilian GP to his schedule; he will will wear exactly the same sponsor logos as Searle and all parties are confident that he can produce good results.

Jean Jacques Luisetti: “Obviously we are deeply shocked to lose the services of Tommy in this way. Tommy is irreplaceable, but we are delighted to welcome Herjan to race our bike in Brazil; we are sure that he will do a good job there and afterwards we will seek a solution for the remainder of the GPs which Tommy will be forced to miss.”