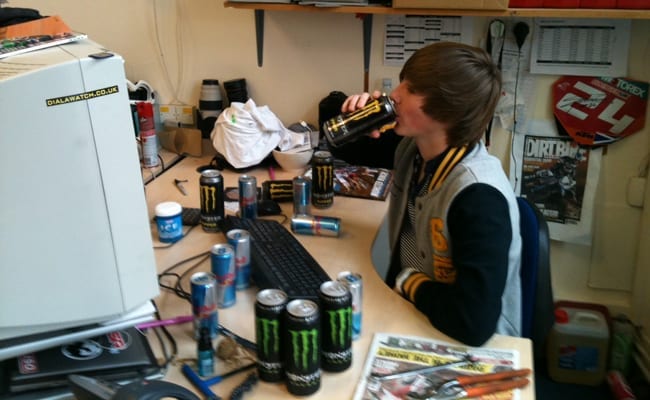 This week we’ve got TooFast Max in the office for a spot of (not)work(ing very hard) experience. In between talent spotting, getting scared in Morecambe’s Arndale Centre, being pawed by The Bear and consuming gallons of energy drinks he found the time to file an armchair spectator’s report form the British GP. Take it away Max…

After a year’s absence motocross was returning to its birth place. That’s right – the British MX GP was back! Motocross was coming home. And damn were we excited about it…

I started to count down the days on my DBR calendar as soon as the event was announced. It was going to be epic. The best riders in the world, racing on the very same track that the great Stefan Everts made his victorious last stand against the Yanks!

As the GP drew nearer we started to prepare ourselves for an insane weekend. Armed with a tent and a lot of beer we were ready! The plan was to go out riding with the lads on Saturday morning and then head down to the race that afternoon – the plan didn’t work. It turned out that we enjoyed riding our bikes so much that we rode straight through the morning and the afternoon. By the time we got home and unloaded the bikes the gate to the campsite down in Matterley Basin had been firmly shut.

So a change of plan was needed. We were to get up bright and early and head down to the race Sunday morning – that plan didn’t work either. A few too many beers the night before meant I managed to sleep straight through the alarm clock. By the time I peeled myself out of my pit it was 11am. Great! It looked like I was going to spend the whole day on the sofa watching Motors TV with just the silky sound of Paul Malin’s voice to keep me company…

By noon the GP was officially on air to the nation, kicking off with the lovely Georgia Lindsey interviewing everyone’s favourite ginge – Max Anstie. “Gonna have some fun doing wheelies, get the holeshot from gate #35 and just smoke everyone easy…” As ever Maximus was his cheerful self, joking and having fun (doing wheelies) – even with a horrendous gate pick. As it turned out Anstie’s plan also didn’t work and he couldn’t quite yank the holesheeeot from the gate on the edge of the world. Anyway, I’m sure he had fun doing some wheelies!

From what the TV showed it looked like there were packed pockets of beery fans supporting everyone’s favourite ginge and the rest of the British riders, hanging over the fences enjoying their millisecond of TV fame as the cameras panned past. However, the sheer size of the track and the surrounding area in places simply swallowed up the supporters.

“Hi, my name is Paul Malin and I’m joined by LPE Kawasaki rider Bryan MacKenzie…’ With these words the TV audience (and me) were welcomed to the second MX1 moto of the day.

Even through the TV you could tell how haggard, worn and damn-right gnarly the track had become. And these conditions proved to be treacherous, claiming many MX1 riders from an already depleted field of racers.

The most horrific crash belonged to Billy MacKenzie and Tanel Leok and created possibly the most awkward moment in MX TV history as Billy launched the uphill quad and landed on Leok. As Billy rag-dolled across the track cousin Bry Mac went silent in the commentary booth.

Not knowing what to say as his cousin was carried unconscious from the track, Bry ended up sticking around in the booth and fulfilling his duties as Malin’s sidekick as they waited for the race to be restarted.