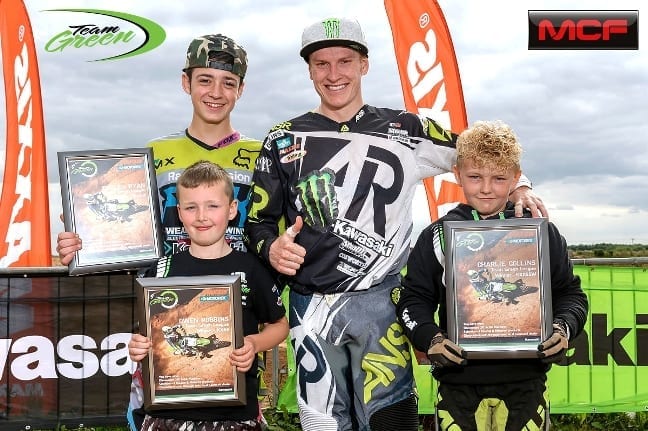 Winners of the 2015 Team Green League have been announced with a winner chosen for the following categories: 65cc, Small Wheel 85cc, Big Wheel 85cc and Rookie.

In order to win, the riders must be the top finishing Kawasaki-mounted rider in their class across the nine clubs that take part.

Owen Robbins (65cc), Charlie Collins (Small Wheel 85cc) and Declan Ryan (Rookie) were lucky enough to have their awards presented to them at the Team Green Try-out day by GP winner, Max Anstie. Liam Jones (Big Wheel 85cc) also won but wasn’t present on the day. Each of the winners will receive a level of support from Kawasaki UK for the 2016 race season.

North East MX rider, Declan Ryan, said: “I really enjoyed my time at the Try-out day and getting to test ride all the new 2016 KX machines. It’s a great achievement to win the Kawasaki Team Green League, I’m really proud that I have as I have always given 100% at every race meeting. I’ve put my certificate on top of my trophy cabinet. I’ve made some great friends riding off-road – and my parents have too – I’m really looking forward to next season already.”

12-year-old, Charlie Collins, said: “Ever since I found out about the Team Green League, I wanted to win it and made it my goal for the year. I’ve put my certificate on the dining room table so that when people come round to my house then they can see it and I can show all my family and friends. I’m so happy about winning the league and I can’t wait for the season ahead now.”

The Team Green League runs in conjunction with the MCF Youth League which aims to give young riders at grass roots level the chance to be part of Team Green and progress their way through the ranks like other riders before them.

Ross Burridge, Senior Racing and Marketing Co-ordinator, said: “We believe it’s important to nurture young talent and support those at a grass roots level to progress – and that’s the ethos of Team Green. Even the best riders in the world started somewhere and we want to help as many Kawasaki riders work their way through the ranks as possible.

“Congratulations to all four riders on being winners in the Team Green League. A huge thanks goes to the MCF who are instrumental in making this League happen.”