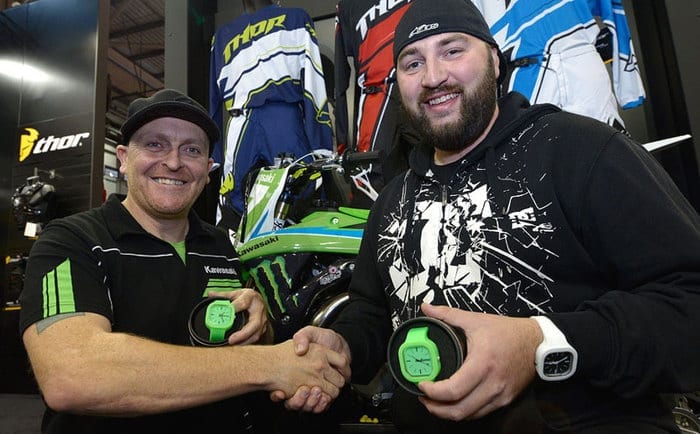 Team Green Kawasaki UK – arguably Britain’s most high profile youth motocross team – are pleased to announce that they have hooked up with Ethic watches.

The deal was sealed at the International Dirt Bike Show when Team Green manager Jeff Perrett and Ethic’s Andy Ward shook hands on it. Not one to miss a trick Andy even brought along some bright green watches to hand out to the lads straight away.

The three rider line up of Dylan Woodcock (Big Wheel 85), Jed Etchells (Big Wheel 85) and Lewis Hall (Small Wheel 85) were understandably pumped to be hooked up with the goods. As was Jeff himself saying; “It’s such a cool sponsorship partner to pick up, one of those shot in the arm types that gives you a buzz. Obviously it’s not a performance part for a bike or anything that will help the lads riding out on the track but it’s a cool brand to be associated with that gives everyone a boost of confidence and don’t tell me that isn’t a good thing to have. A big thanks to Andy for hooking us up and we’re looking forward to working with him and Ethic going forward.”

Andy is also happy about getting involved with Team Green having this to add; “We are excited to be sponsoring Team Green Kawasaki for the upcoming 2014 race season. Supporting a high profile youth motocross team and to be alongside major sponsors such as Kawasaki Motors UK and Monster Energy was an opportunity not to be missed. The young talented riders will make great ambassadors for our brand within the motocross industry and we look forward to working with them and the team over the 2014 race season and beyond.”