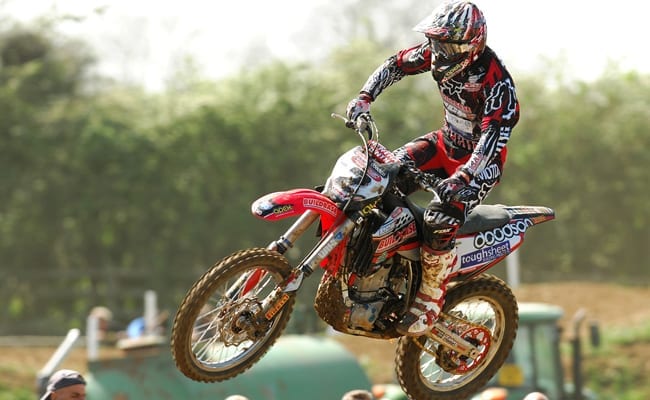 After a succession of recent injuries Buildbase CCM rider Stephen Sword has taken the tough decision to hang up his boots for the rest of the season.

Injury #1 came at the Maxxis round at Desertmartin last month when he dislocated his shoulder and banged up his ankle. After careful training and intensive physio Swordy was back in action at the next Maxxis round at Foxhill where he won the opening moto. But while leading the second race he caught his suspect ankle in a rut and was in so much pain had no choice but to call it quits for the day.

With his doctor predicting a four to six week lay-off due to ligament damage and bruising in the ankle joint the three-time British champ and his team have decided to draw a line under their disappointing season. This means Stephen will not race the bike again this year as his contract runs out on October 3.

“This year has been a difficult year for me,” says Steve. “The problem with the tyres at the first round was the first in a string of bad luck this year. I have had the speed and fitness to win and the bike has been more than capable as I have proved.

“The team and I have decided to rest up now for the rest of the season. I am not sure of any plans for 2012 at this stage but I will be looking to come back to win at the first SX championship in late October and perhaps the Weston Beach Race.

“I would like to thank the team for all their help and support over these past two seasons. It’s been great to be involved with Buildbase CCM and bring them some success, although we fell short of a championship. A bit of luck this year and who knows, we could have done it.”

“Steve is a true professional and it has been a great honour to have him in our team over the last two years,” adds Buildbase CCM Racing Director Austin Clews. “Both Gary Harthern and myself would like to thank Steve, Dave and Ryan Thorpe, Dickie Dye and everyone else in the team who has contributed. We wish Steve a speedy recovery and the best of wishes to Jodie, Steve’s wife, who is expecting their second baby mid-August.”

Maarten Cremers will continue as the lone CCM rider as planned.