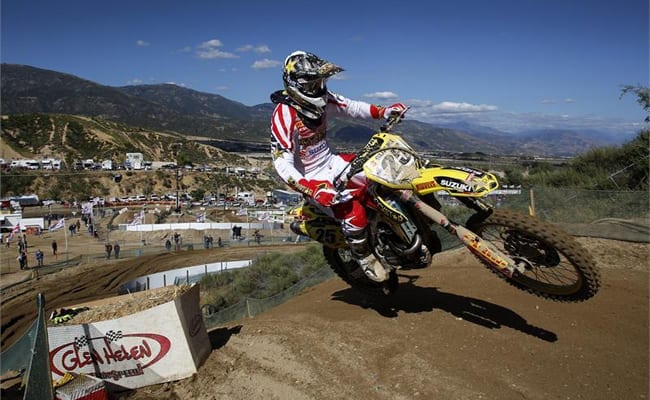 Rockstar Energy Suzuki World MX1 was able to toast its second victory from just three rounds of the FIM Motocross World Championship as Clement Desalle notched a perfect weekend at Glen Helen for the US GP.

The Belgian sealed pole position and then won both motos on his works RM-Z450 in front of an attendance of 22,000 under varying weather conditions in California. Desalle regained the red plate as MX1 standings leader after grasping his second champagne bottle of the season and was masterful across a difficult circuit.

Rain throughout Sunday morning meant that the long, fast and big jumps of the historic layout in San Bernardino became slippery and very muddy. Thankfully, strong winds cleared the grey clouds by midday and also started to dry the soil so that a very damp first moto gave way to demanding bumps and ruts by the time of the second gate drop.
Desalle proved that he had found an unmatchable rhythm across the course during a dry Saturday when he sped to an undisputed pole position. Two excellent starts meant that the 21-year-old could forge his pace at the front of the field. Antonio Cairoli and later Max Nagl gave chase to the rear Pirelli of the RM-Z450 deep into the 35-minute and two lap distance but neither could dislodge #25 from his position of control.

Team-mate Steve Ramon was 13th overall but his result was determined by a fall on one of the steep hills in the first moto that damaged his motorcycle and forced a DNF. The former world champion rode to seventh place in the second race.

Former world championship runner-up Kevin Strijbos only just missed out on a podium finish with his RM-Z450 but the Belgian was a welcome sight back at the front of the GP field and collected fourth overall.
After three rounds of the world championship Desalle has regained the top spot of the standings and the red plate for the second time. He leads Nagl by six points and Cairoli by a hefty 24. Ramon is 11th. The team will now refill the crates and pack in preparation for round four and the Grand Prix of Brazil at Indaiatuba next weekend.

Clement Desalle:
“It was a great weekend for me and I have never taken pole position and won both motos before. I also stayed on two wheels and came away without any problems which is important because the track was dangerous and you had to make quick decisions. I kept in my comfort zone and really enjoyed it.”

Steve Ramon:
“My riding wasn’t bad but I couldn’t find a good rhythm in the first moto and five minutes before the end I made a mistake going down the hill. It was a pretty big crash. The handlebar was bent and the clutch lever had folded down so I had to stop. No points, no good. I was top five at the start of the second moto but lost two positions on the second lap – however my speed was good. Near the end I had a problem with a lapped rider and I twisted my foot trying to pass him. I had to slow down in the last half-a-lap. What can I say? I cannot be too disappointed because the last few weeks were terrible for me but I had the energy to complete the moto at least. I am looking forward to Brazil now.”