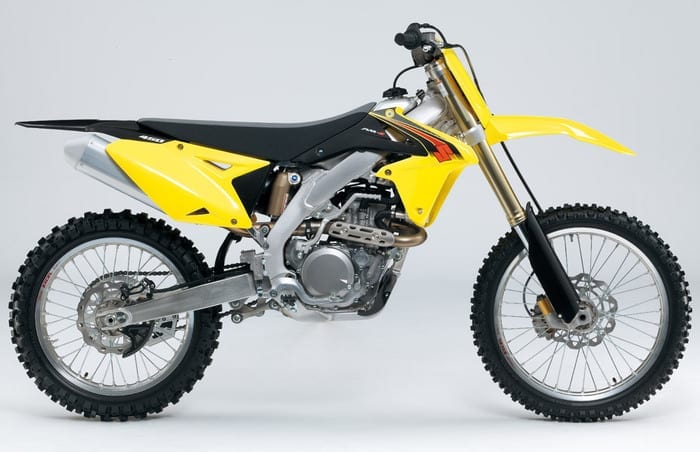 Suzuki has today confirmed details of its latest MX1 contender for the 2015 model year, bringing significant updates to the popular RM-Z450 that include an all-new launch control system and spring-less SFF Air Forks.

Update: Watch the new Ricky Carmichael at home with the 2015 Suzuki RM-Z450 video

Offering easily selectable rider settings, S-HAC alters ignition timing to deal with the start gate surface. Mode ‘A’ provides a smoother engine response for slippery conditions, while mode ‘B’ offers an aggressive map where good grip is available. Full power ignition timing is restored when pre-determined gear selection is reached or when a period of time has elapsed, depending on mode selected.

Settings are easily selectable via a push button on the left-hand-side of the handlebar, illuminating to show the rider which mode they have selected.

Following the introduction of the Showa SFF Fork in 2012, the new model goes one step further, with the departure of the traditional fork spring in favour of the inner air chamber set-up, also seen on James Stewart’s factory AMA machine.

Offering significant advantages in bike set-up, the SFF Air system allows riders to make set-up changes quickly and easily by simply adjusting air pressure in the internal air chamber. Other benefits include a reduction in overall weight and more consistent damping, due to the removal of heat influence, normally associated with oil-filled forks.

With strong engine performance already a trademark of the RM-Z450, 2015 development has centred around weight reduction and usability, with redesigned starting gear and improved cooling performance a priority.

To improve engine starting on all occasions, Suzuki engineers made significant changes to all relevant areas, with a redesigned kick-drive gear, redesigned decompression system, relocated kick idle gear and a lengthened kick-start.

An increase in cooling performance has also been possible thanks to changes in the water pump housing, as well as a relocation of the hose connection and routing between each radiator. As a result water flow is increased by 16% and weight is further reduced with the elimination of the hot starter system.

Working in harmony with the new SFF Air Fork and aiding the overall reduction of weight, is a redesigned main frame too. With re-shaped internal ribs, rigidity is optimised, meaning a 4% reduction in weight over the previous model.

The 2015 RM-Z450 is set to arrive in dealers in the Autumn of 2014, with its European media launch scheduled for later this summer. Recommended pricing will be confirmed soon.