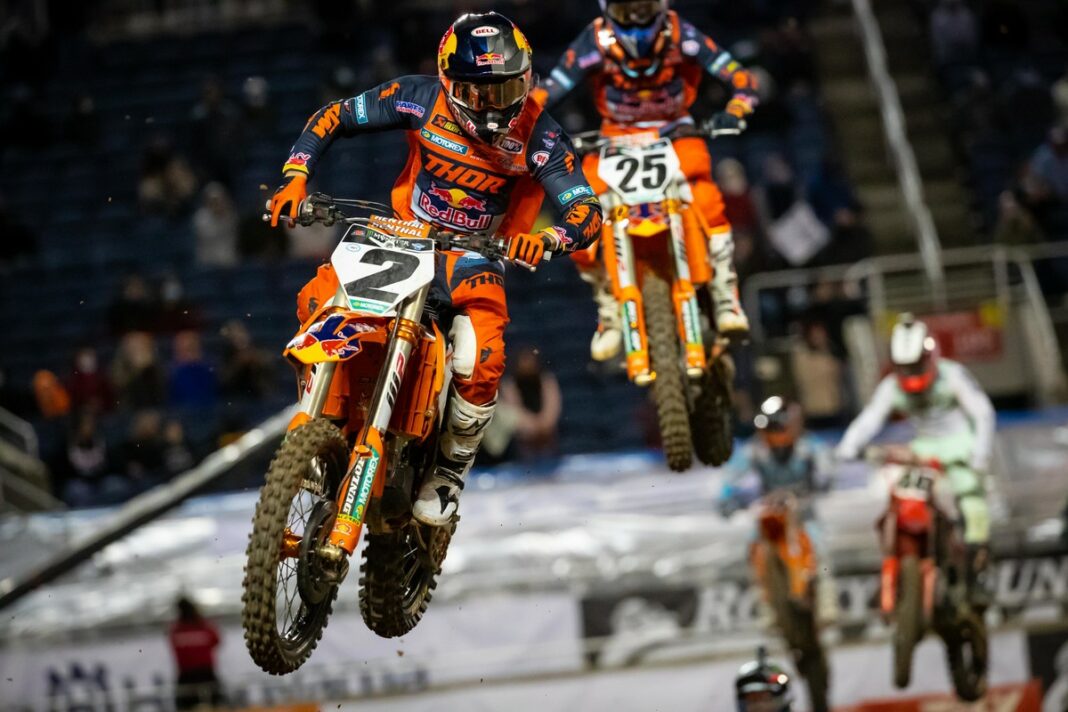 While finding the track tricky during the night’s main event, he was also testing a new air shock for the factory.

“Orlando’s treated me awesome tonight was great race all in all, I think we’re in a really good spot with the bike and kind of after you get a few races under your belt you know how it kinda works and who’s going to be who and where and stuff like that.|said Webb.

“So we’re always fine tuning and trying to get better. I think we’re in a really good spot though, and we’ll try to keep plugging away.

“The first Orlando definitely had some better traction, I’d say. I think like Barcia said it was kind of unfortunate that it didn’t get rebuilt, ike we would’ve all kind of expected, but I’d say today was definitely a lot more hard pack as you saw in practice.

“It was pretty dry and the night show was a little better, but it had some really tough, weird places, like it just felt like the dirt had been sitting there for a while.

“Some of the jumps that were the same, it just seemed like they had been baking all week and stuff and just the super, super hard to be honest. I think that it was nice having a little bit longer lap times than what we have had these first five or whenever it was in Indie and Houston, that was one cool thing. But you know, overall it ended up being good open stadium. You never know with weather, what can happen.”

Cooper also revealed some details of the air shock system he’s been testing on the KTM which will be the similar as Barcia has been running on the GasGas all season.

“The air shock has such massive potential but we weren’t able to really get as much testing as we were hoping to in the off season, just due to lack of parts really. The team was here this week and I felt like we actually made great progress with with the air shock.

“I was feeling really good this week with it and confident, but man, it’s just one of those things to change what you want on last Saturday, and for me, I wasn’t willing to do that.

“So I think after the first Orlando, when everything was clicking, it just was something that’s the go-to but in this class and in the sport, we’re always improving and trying to get better. We’ll work on some things and see what we end up with that Daytona.”