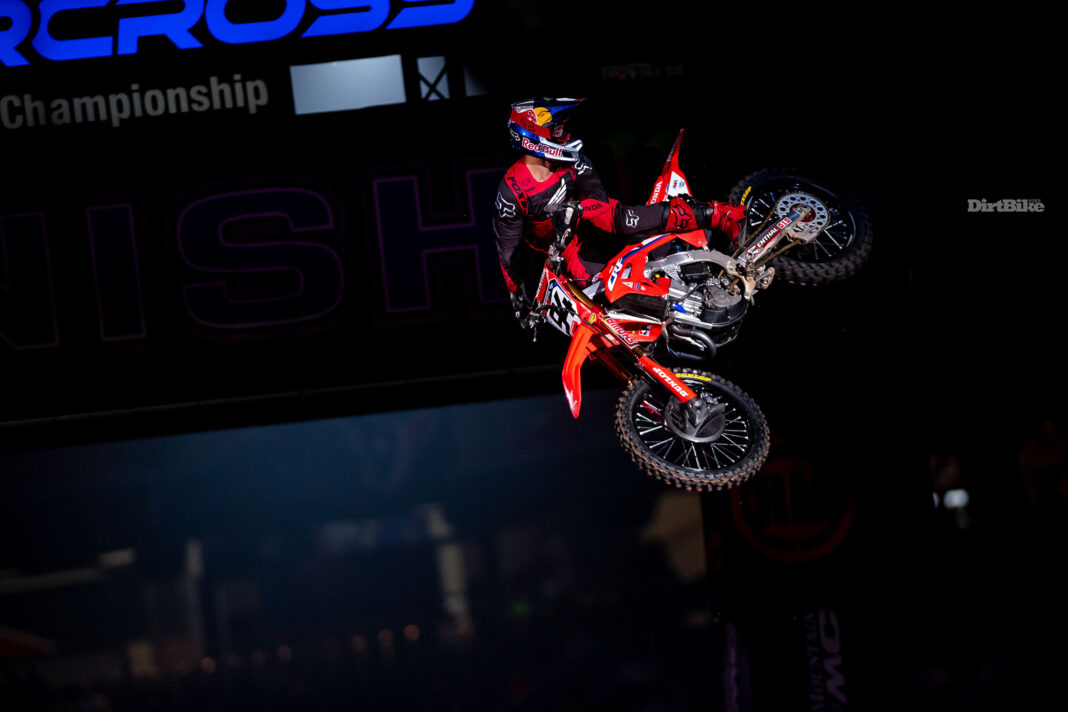 The 2021 Monster Energy AMA Supercross tour has moved on from Houston, arriving in Indianapolis this weekend for the first of three races inside the Circle City.
The colossal Lucas Oil Stadium kept out the freezing Indianapolis weather and hosted yet another night of red hot supercross action. KTM’s Marvin Musquin won the previous two editions of the Indianapolis round, in 2018 and 2019, but it was Ken Roczen who stole the jewels in Indy last night, after one of the best Main Events in recent memory. He became the fourth winner in as many races. 2021 is the season that just keeps on giving…

As the gates dropped for the first 450 race of the evening in Indianapolis Brandon Hartranft got off to yet another flying start onboard his Twisted Tea Suzuki, however Adam Cianciarulo was able to keep a tight line around the first turn and emerge with the leading position. He was followed by a pair of factory KTM’s, with Marvin Musquin and Cooper Webb taking second and third positions early on.
So far this year Justin Barcia has been on a hot streak in the Heats, but that fire finally burnt out in the chilly Indianapolis air. The GasGas rider struggled out of the gates, beginning the race well outside the top ten.
The softer dirt in Indy was also causing some problems. Jump faces were quickly becoming very rutted, catching out a number of riders throughout the day. Vince Friese and Alex Ray were two of these guys. Friese had a very scary crash on the big double jump, his stricken bike then took out A-Ray in a nasty way.
Marvin Musquin, who as mentioned has won the past two races in Indy, excels in these tricky technical conditions. He was the fastest man on track during Heat one, however he didn’t quite have enough time to make a pass on Cianciarulo. The Monster Energy Kawasaki rider took the win ahead of Musquin and Webb. Justin Barcia fought his way back to sixth and was looking to make a last-ditch pass on Joey Savatgy in the final corner for fifth, but his plan didn’t quite pan out and JB hit the dirt. He recovered quickly to finish in sixth.

Ken Roczen grabbed a massive holeshot on board his HRC Honda in Heat two. Zach Osborne followed him in second and Broc Tickle was third early on. Dylan Ferrandis also got off to a great start on board his Monster Energy Star Racing Yamaha, he quickly made a pass on Tickle to take over third place.
Last years champion Eli Tomac struggled out of the gates yet again in Heat two, he was eighth as the race got underway. However, Justin Brayton was the man who got off to the worst start. The Muc-Off Honda rider crashed in the first turn and had a lot of work to do in order to move into a qualifying position.
Ken Roczen looked to be a man on a mission as he stretched away at the front, opening up a massive race lead. With two minutes left on the clock the battle for second really started to heat up. Zach Osborne was coming under fire from Dylan Ferrandis, and Eli Tomac. Tomac made a pass stick on the rookie Ferrandis and set his sights on the Rockstar Energy Husqvarna rider as the last lap got underway. Osborne defended well to hold on to second position ahead of the reigning champ. Roczen finished with a 11 second margin over Osborne and Tomac. A dominant ride for the man on red.
Elsewhere Justin Brayton was able to battle back into a qualifying position. He finished ninth, just ahead of 2018 champion Jason Anderson. Anderson made a mistake in the latter half of the Heat, dropping him down the leader board and sending him to the first 450 LCQ of his career.

Starting inside the top four Jason Anderson quickly worked his Rockstar Energy Husqvarna to the leading spot in the 450 LCQ. He brought home the win ahead of Vince Friese, Justin Bogle and Austin Politeili, who grabbed the final transfer spot at the very last second.

Eli Tomac finally figured out his starts by the time the 450 Main Event rolled around. The Monster Energy Kawasaki rider claimed a commanding holeshot ahead of his teammate Adam Cianciarulo and the fast-starting Joey Savatgy.
During the opening lap mayhem Justin Barcia’s night went from bad to worse, as he was involved in a multi-rider crash on board his Troy Lee Designs Red Bull GasGas machine. Cooper Webb also got off to a mediocre start, he was seventh early on. His teammate Marvin Musquin was another man who struggled out of the gates, and during the Main the Frenchmen was never able to find the form that he showed earlier in the night. Zach Osborne was the final big hitter who had a nightmare start, he hit the gate leaving him in dead last as the race got underway.

At the front of the field Joey Savatgy was shuffled back a couple of positions as Ken Roczen and Dylan Ferrandis moved forwards. Roczen was just starting to apply pressure on the second-place man Adam Cianciarulo when the race leader – Eli Tomac – made a small mistake allowing both Roczen and Cianciarulo to pass. The two-way battle for second suddenly became a three-way battle for the lead.
This awesome fight between Roczen and the two factory Kawasaki’s lasted for the best part of ten minutes, with Roczen doing everything in his power to attack AC whilst defending his position against the champ.

With just over ten minutes to go Roczen initiated a pass for the lead by skimming the whoops allowing him to close in on the rear wheel of Cianciarulo. Two corners later the German was the new race leader. This must have taken AC off guard as his teammate was able follow Roczen through and make a pass stick on Adam as well. Cianciarulo lost his front end in the next berm and went down momentarily, although he was able to recover quickly and remount just ahead of Dylan Ferrandis, Joey Savatgy, Cooper Webb and Zach Osborne – who had made an incredible storm through the field.

Dylan Ferrandis made a mistake on the tricky double-double section that saw him jump off the track, allowing Webb and Osborne to capitalize. Osborne looked to have his sights set on a podium position, but after his hard-fought fight through the pack the Husqvarna pilot seemingly ran out of steam as the race reached its closing stages. This allowed Webb to focus his efforts on making a pass on Cianciarulo for third. The Red Bull KTM Factory rider made a good run through the whoops with two minutes to go to steal the final podium spot away from his former arch-rival.

Back at the front of the field the drama continued. Roczen made the exact same mistake as Ferrandis. The HRC rider cross-rutted and jumped off the track, allowing Tomac to re-inherit the lead that he lost on lap three.
After his setbacks in the previous two races Roczen sure as hell wasn’t going to roll over quite so easily and let the race win slip from his grasp. He battled back right away and took Tomac off-guard in the long sweeping corner. Roczen re-took the lead and never looked back. Eli attempted a last lap attack on Roczen, but he made a small mistake through the main rhythm lane and wasn’t able to get close enough to try a pass. Ken lit the candles to take home the win ahead of Tomac and Cooper Webb.

After his recent frustrations Ken was exuberant on the podium and happy to stretch open his points lead, ‘‘I feel like Adam was holding me up just a little bit, so I had to ride protective. I was a little stuck there for a bit. But I’m just so glad we made it happen. I actually made a mistake there on the second double and jumped off the track. I didn’t know what I was supposed to do so I let Eli by, I feel like that was the right thing to do.
I put the pass on right away and had a clear track, but it was really gnarly and easy to make a mistake. He pushed me the whole way. I’m just so happy to put the 2021 Honda CRF450R on the top step.’’

San Diego SX: Schedule and Where to watch