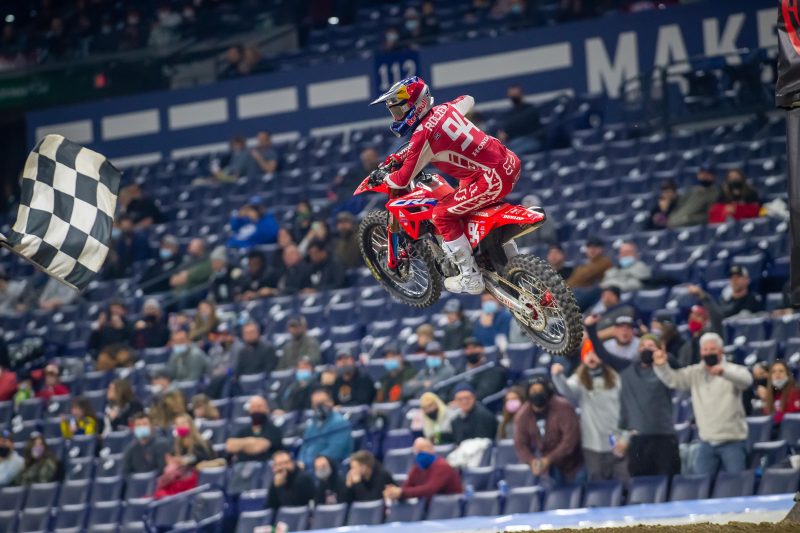 Ken Roczen grabbed his second main event win at Tuesday’s Indianapolis round five of Monster Energy Supercross, giving him the back to back wins.

The HRC Honda rider has shown strong performances over the last couple of rounds, after struggling in previous years due to injury with both his wrists.

“It’s amazing,” said Roczen. “I don’t think surprised is the right word, but I am a little bit as the competition is stiff out there. I have confidence in my equipment and my abilities, but it’s difficult to do as everyone is going so good right now.”

Speaking about a few close calls on track at round five, Roczen said he always ends up coming together with the Bullfrog Spa honda rider Vince Friese, stating he punted him off.

“I seemed to have a some really close calls, but obviously I punted Friese out of the way, I don’t know I seem to find that guy every single weekend on the track, and almost when down there with him. There was a couple of sketchy moments on track with riders being on the wrong side of the track and cutting over and what not, but we made it happen,” said Roczen.

The German is much happier with his CRF450 in 2021 than 2020 as it’s a lot easier to setup and ride which is adding to his consistency.

“The geometry is completely different to last year’s bike, last year’s bike was a really difficult bike to set up and it would bite you on the ass real quick. This bike is a lot more consistent and weight distribution on the bike is so much better,combined with the other changes they did I am so much more comfortable on the Honda. The motor is a lot different and has a lot of torque,” said Roczen.

Watch the post-race press conference below: