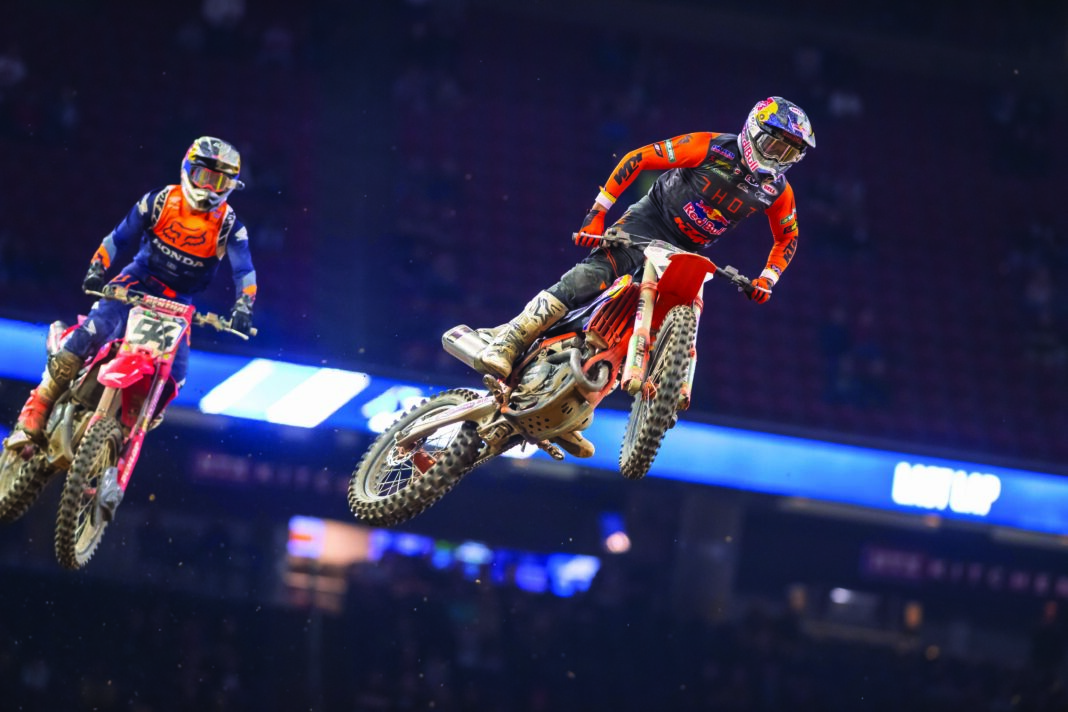 The Red Bull KTM Factory rider ripped victory away from Honda’s Ken Roczen on the final lap of action. As the race reached the halfway stage heavy lapped traffic helped Cooper close the gap on Roczen, and as the final two laps got underway Webb set his sights on the race leader.

‘‘It was tough tonight with lappers and at that point (halfway) I’d lost a lot,’’ explained Webb, ‘‘So I just put my head down. I knew it was going to be super hard, but I kept chipping away and closed the gap a little bit. Then I put on a good charge at the end. It was really tough for all of us tonight.’’

Webb has made this type of move on Roczen before, so was this all part of his game plan for the race?

Webb switched up his line in the whoops on the final lap to really close in on Ken, ‘‘I was struggling skimming the whoops at the beginning of the day, but in the main I had a half jump half skim going on that worked good. I knew Ken had committed to the jumping line, so I just knew that if I could get a good run skimming I could close the gap.’’

Webb was indeed able to close that gap before smashing the dreams of Roczen fans around the world.

If we’ve learnt anything over the past two years, it’s that Webb takes a little time to warm up at the start of the season. Cooper finally seemed back to his 2019 championship winning form last night in Houston. Webb agrees that his first race win of 2021 came just in time, ‘‘It reminds me a lot of 2019 where I was off the radar for the first two rounds and got the win at the third round. Its stacked man, as you’ve seen at these first three rounds.’’

Webb is hopeful that the series will level out slightly at championship continues, ‘‘It’s all about starts and track position. I think as we go on the tracks will get better and we’ll get in some better racing. It’s still early and we are in a good spot. There’s going to be a lot of good and bad nights, so you’ve got to go with what you’re dealt.’’

Cooper Webb spent the off-season managing some issues with his back and wasn’t able to spend quite as much time testing in California as he would have liked. Which may explain his relatively slow start to the season. But with this win Cooper is now second in the points chase, just one behind series leader Ken Roczen. Does this mean that Webb is now back to 100% and his bike is working just as he likes it?

‘‘We’re getting better. It’s been a bit of a struggle in the off season, but we have some new stuff on the bike this year. Race conditions are always different from the practice track and these first two rounds we’ve had a lot of traction, a lot more than any of us were anticipating so it’s been a little tough.

“I’ve got to give it up to my Red Bull KTM team, they been changing stuff every time I’ve been on the track, but tonight they made the right call. I’m stoked, from the first Saturday to this Saturday there have been massive gains and we’re looking to keep building with a long series yet to come.’

Although cool, calm and collected off the track Cooper Webb never fails to provide classic moments for the highlight reel once the gates drop. He gave us yet another thrilling race finish last night, one that none of us will be forgetting any time soon. As Cooper said on the podium, when in Texas you either go big or you go home.

Cooper went big, and now he’s going home with momentum on his side and a head full of confidence….and that’s a dangerous Cooper to be dealing with.