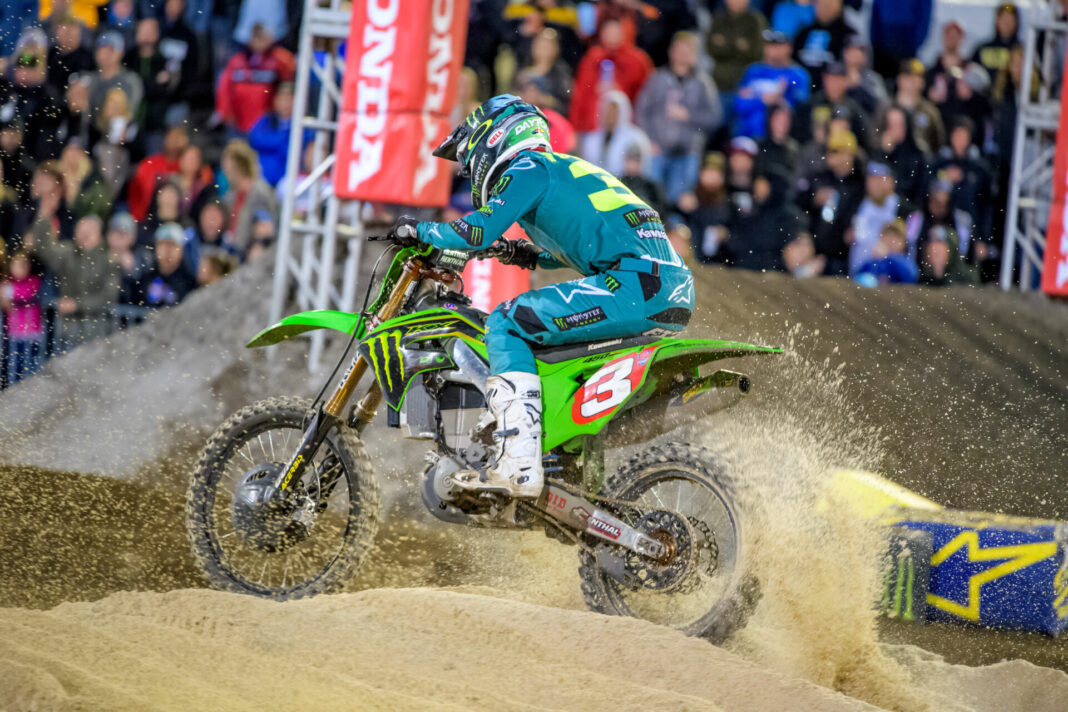 The 450SX Class is always a fast pace field to watch at the Monster Energy Supercross, combined with the chaos that comes with the deep Daytona sand sections that have been created for this weekend’s racing, it was packed full of action.

Red Bull KTM’s Cooper Webb hole shotted the first 450SX Heat race tonight, whilst Troy-Lee Designs Gas Gas’s Justin barcia is on the charge behind him, with plessinger right behind the pair holding off Broc Tickle. Another great start for Anstie as he sat in 7th for the first couple of laps, ultimately finishing 8th putting him straight in the main event. Webb continued to win heat one, whilst Rockstar Energy Husqvarna’s Dean Wilson was in to make the main, but crashed out trying to pass Anstie.

Muc Off Honda’s Mitchell Oldenburg holeshots with Ken Roczen making the pass quickly after a couple of corners, whilst Star Yamaha’s Malcolm Stewart made a great pass on Oldenburg to move up to second place. Oldenburg then makes a mistake in the deep sand section of the Daytona circuit, causing carnage as a few riders go down including Shane McElrath going over the bars. Roczen wins heat two with Mookie just behind him, followed by Daytona favourite Eli Tomac.

Eli Tomac had his eyes firmly set on winning in tonight’s 450SX main event in Daytona, as he grabbed the holeshot and started pulling away almost immediately.

Cooper Webb then in first corner looked over to see Ken Roczen, and shoved him out on the turn which pushed him back down the seventh position. HRC Honda’s Chase Sexton got a great start earlier on in the main event moto, sitting just behind Plessinger in fourth.

Meanwhile his team mate Ken Roczen chipped away at working his way back through the pack just missing out on a podium finish. Monster Energy Star Racing Yamaha Aaron Plessinger was unbelievably fast in the whoops section, making a great pass on the deep sand corner to advance past Cooper Webb and started the chase on Eli Tomac.

You can read up on all of tonight’s results here.

Kawasaki burn outs all round at Daytona SX: