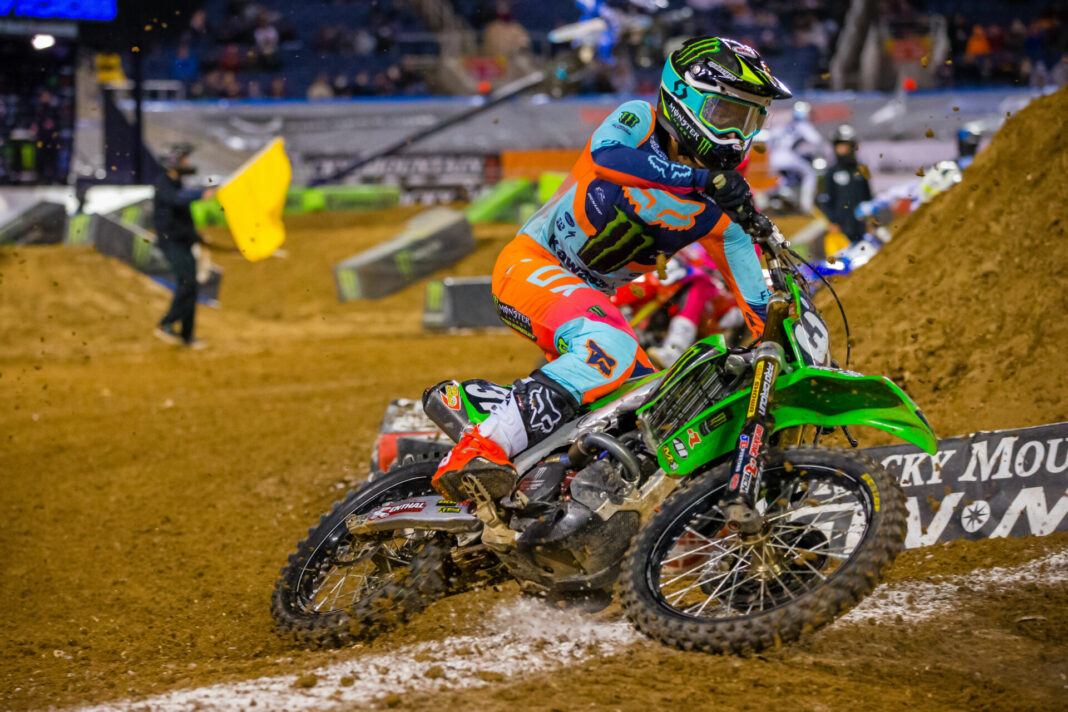 The 250SX boys were raring to go tonight at the Daytona International Speedway for the ninth round of the Monster Energy Supercross series after the bad weather earlier on in the day necessitated a bit of track maintenance before the main event races.

As the gate dropped in the 250SX heat one we had the Monster Energy Kawasaki rider’s Cameron Mcadoo and Seth Hammaker out front as we saw in qualifying earlier on in the evening, with Mcadoo pulling an impressive six seconds on his team mate to continue to win heat one, with Pierce Brown and Jordan Bailey finishing behind for third and fourth.

Moving onto heat two is where things started to get a little crazy! After a great hole shot by HRC Honda’s Hunter Lawrence, the race is red flagged due to a few riders down on the landing of the triple. Monster Energy Star Yamaha and championship red plate holder Justin cooper was way down the field on the first start and the restart, making it hard work to cut back through the pack. Even though the race is restarted, Lawrence holeshotted again, with Jordan Smith behind him. Meanwhile Mitchell Harrison’s bike had stopped, with a mechanical failure putting him in the LCQ.

Justin Cooper has really been struggling with his starts tonight in Daytona, after suffering another bad start in the 250SX main event he yet again had to claw his way back through the field. Hunter Laurence went down also, sitting in nine and tenth with Cooper. Troy-Lee Designs Pierce Brown moved up into the top five then proceeded to finish in the top three, which is a great result for the team. Meanwhile the Monster Energy Pro Circuit Kawasaki Cameron Mcadoo took the lead and bagged his first ever main event win, He was then followed by the Rockstar Energy Husqvarna Rookie rider Stilz Robert coming home in second, followed by Pierce Brown in third.

Check out all the results from tonight’s racing here.

Here is Mcadoo’s win below: