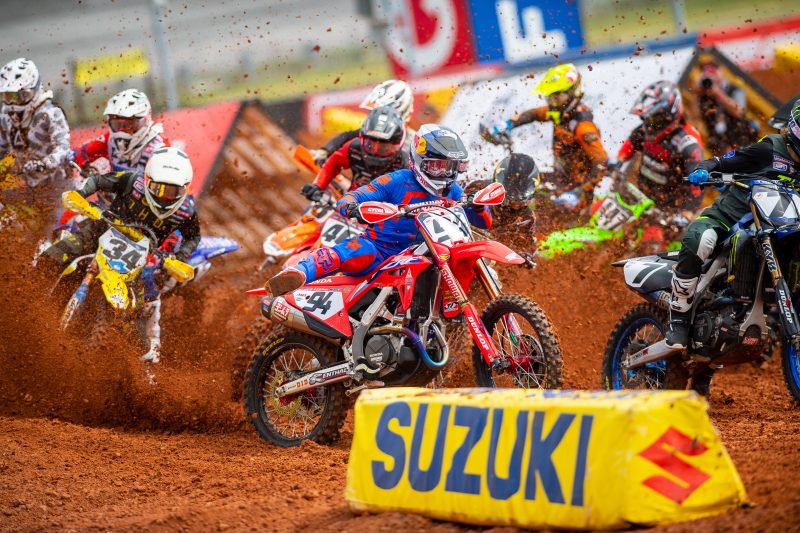 HRC Honda’s Ken Roczen rode like his former self at round fourteen of the Monster Energy AMA Supercross championship this evening in Atlanta, Securing the 450SX Main event win.

“Every time we go to race like first of all the sports a frickin art, you know what I mean,” said Roczen, speaking at the track.

“There’s just different variables all the time to be tracked, we kind of threw a lot at me for this coming round also with the bike, and try to make some changes throughout the all three practices and stuck with something that was good and better but it’s first it’s unproven right until you race it and race good on it so yeah in general though, Saturday was just a tough one and like I said I wasn’t really myself and just struggling and struggling and couldn’t really do anything on the track.

“The most important thing and it’s not an excuse whatsoever it’s just, it’s what it is you know. But today, things turn around and I just never lose hope, you know what I mean you see the points and everything fizzling away but at some point I got to kind of look away from that because in the last few rounds like I’ve had just tough time, you know in general.

“At some point, you gotta just let go of that as well and kind of regroup and you can see things can turn around real quick and this is what we always say, but most mostly I’m just trying to stay calm and not get in over my head here, same with the win tonight, even though this was, you know, it came just at the right time and we all needed it, but at the same time you know we got it.

“It’s not like we have a lot of racing left but we gotta make it through a few more rounds and I just want to do my thing, and try hard and give my best to see what we can do and you know hopefully it works out and if not it’s not the right time.”