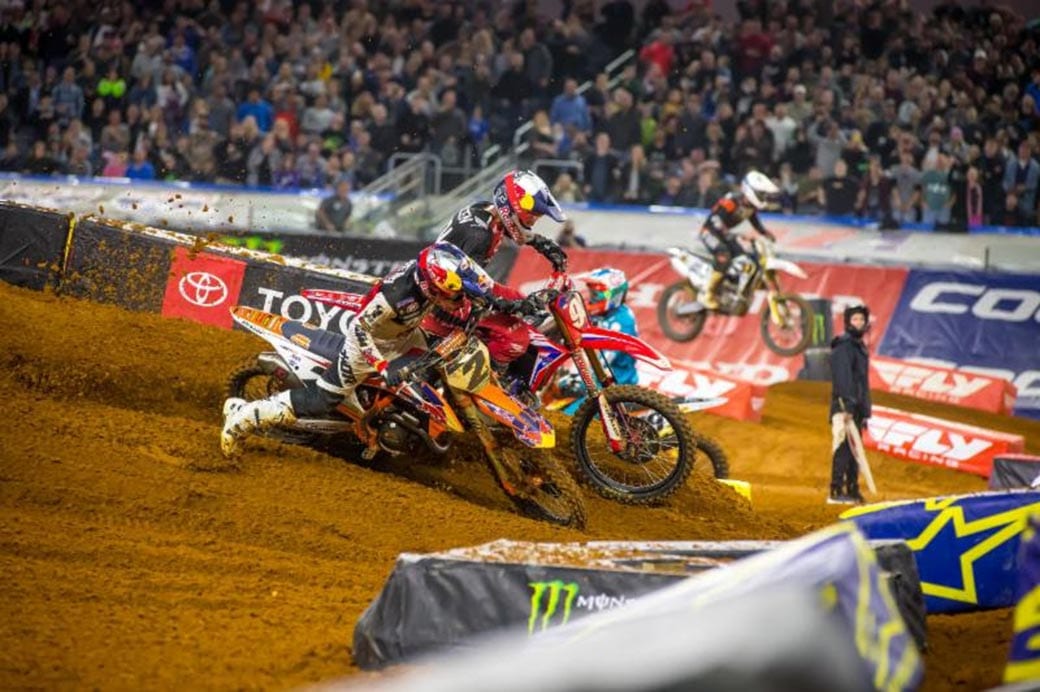 The 17-round schedule for the 2020 season of Monster Energy AMA Supercross, an FIM World Championship was announced earlier this year and today Feld Entertainment, Inc. revealed which cities will feature the Triple Crown, 250SX Class Regional Championships and the East/West Showdown formats.

In its third year, the 3-Main Event Triple Crown format races will take place at State Farm Stadium in Glendale, Ariz. on January 25, AT&T Stadium in Arlington, Texas on February 22 and at Sam Boyd Stadium in Las Vegas on April 25.

The Eastern Regional 250SX Class Championship will be contested at the following rounds – Tampa, Fla. on February 15, Arlington, Texas on February 22, Atlanta, Ga. on February 29, Daytona Beach, Fla. on March 7, Indianapolis, Ind. on March 14, Detroit, Mich. on March 21 and Foxborough, Mass. on April 18.

The East/West Showdown races will be held at Empower Field at Mile High in Denver, Colo. on April 4 and Rice-Eccles Stadium in Salt Lake City, Utah on May 2.

East/West Showdown races became synonymous with the Las Vegas finale and were the only time in the season where both the Eastern Regional 250SX Class and Western Regional 250SX Class athletes raced together in what was originally combined non-points paying events. This changed in 2016 when the series changed the format to points-paying races as the only Main Event in the 250SX Class. 2020 will mark the first time in the sports history that the East/West Showdown races will take place in two new cities, in-an-effort to expose the younger 250SX Class athletes to new audiences.

While athletes begin to qualify inside the stadium, FanFest (festival for fans) will kick off outside the stadium in the paddock where the expansive 14-acre footprint will feature experiential activities for all ages – athlete autograph signings, enhanced Monster Energy demos and musical acts (select markets), lounging areas, charging stations, Kawasaki’s Z World (select markets), Monster Energy Supercross, the Official Video Game 3 Experience, Supercross Virtual Reality Experience, photo opportunity set ups, food and beverages, plus authentic Supercross and racer merchandise. Fans can experience all of this while also enjoying in-and-out access to the stadium and track to watch practice and qualifying.

The Toyota BMX Triple Challenge will take place during FanFest at Angel Stadium of Anaheim in Anaheim on January 18, Empower Field at Mile High in Denver on April 4 and Rice-Eccles Stadium in Salt Lake City on May 2.

Salt Lake City will host the largest-ever FanFest footprint at Rice-Eccles Stadium and will become the epicentre of an outdoor-themed, festival-like atmosphere befitting for a World Championship Finale and a World Class, Utah-styled, State of Sport calibre event. Street closures are planned for around the stadium to accommodate the larger crowds. Beer gardens, lounging areas and experiential activities will be sprinkled throughout FanFest to accommodate fans and interests of all ages. Make sure to check SupercrossLIVE.com throughout the season as plans are still being developed for this first-ever Supercross FanFest World Championship Finale in Salt Lake City.

The DAYTONA Supercross will celebrate 50 years in 2020 and the race will feature an extended course that will be a nod to the history of DAYTONA Supercross. The gruelling and challenging course that riders will face will be designed by five-time event champion Ricky Carmichael for the 13th consecutive year.

The date and location of the 2020 Monster Energy Cup will be announced later in the year.

Tickets for the 2020 season will go on sale to the general public on Tuesday, October 8 at 10 a.m. in each city’s local time zone. Preferred customers can sign up in advance for early access to purchase tickets today, October 1 through October 7, by visiting SupercrossLIVE.com. The pre-sale begins today at 10 a.m. ET and then 10 a.m. in each subsequent time zone.