Home Supercross AMA Supercross SR75-MOLSON DBR team heads to the USA for final round of the... 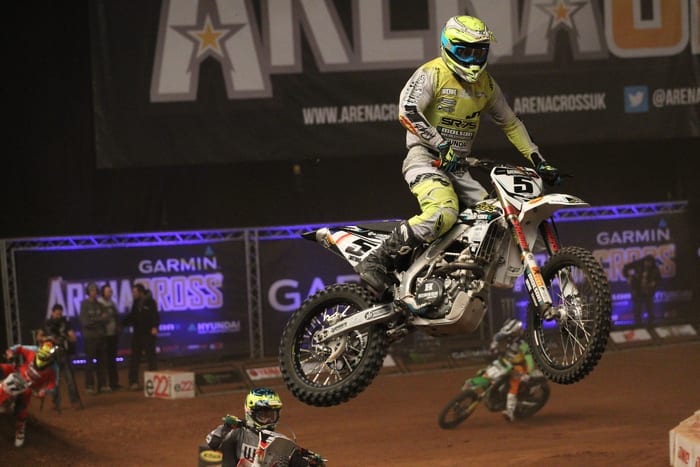 As a rider/tester, and now team owner Geoff Walker has always strived to push the boundaries to make the impossible happen… Making this race trip happen is on point with everything Geoff and the SR75-MOLSON DBR team are all about.

Making this a reality has, and is, taking a lot of organising but with great team partners and a worldwide network of friends built up over many years SR75-MOLSON DBR have been able to make Geoff’s dream of taking the team name to the ‘big show’ in the form of the AMA Supercross Finale in Las Vegas and the first Outdoor National in Glen Helen a reality.

Geoff has personally struggled to come to terms with the scale of what they are taking on, but with their man Cyrille Coulon preparing and doing his thing in his own special way, the attitude for this is very much in keeping with the team philosophy.

They will work hard and give each race 100% effort and whatever happens, happens.

Cyrille has raced AMA Supercross before and took it to the Main five times out of six rounds.

The team and DBR are not expecting miracles – the competition is way off the scale but Geoff believes in Cyrille and Geoff also believes they have a great shot at progressing through the program and taking a good run at making the Vegas Main Event. This will be their focus and sole intention for phase one of the program.

The team are incredibly pleased to have the support of Suzuki USA through the hard work of Suzuki UK and they know the capabilities of Cyrille on board the awesome RNZ450 after an incredible and hard fought Arenacross UK series, where at times he showed class above the competition.

With their test schedule planned they are going to work hard and try to pull off the ‘impossible’ by coming in at the final round and aiming for the Main.

Geoff said: “I would like to thank all our partners on this side and the other side of the Atlantic who are helping to make this dream a reality.”

Look out for more updates on the progress of SR75-MOLSON DBR team on dirtbikerider.com and in future issues of Dirt Bike Rider magazine.