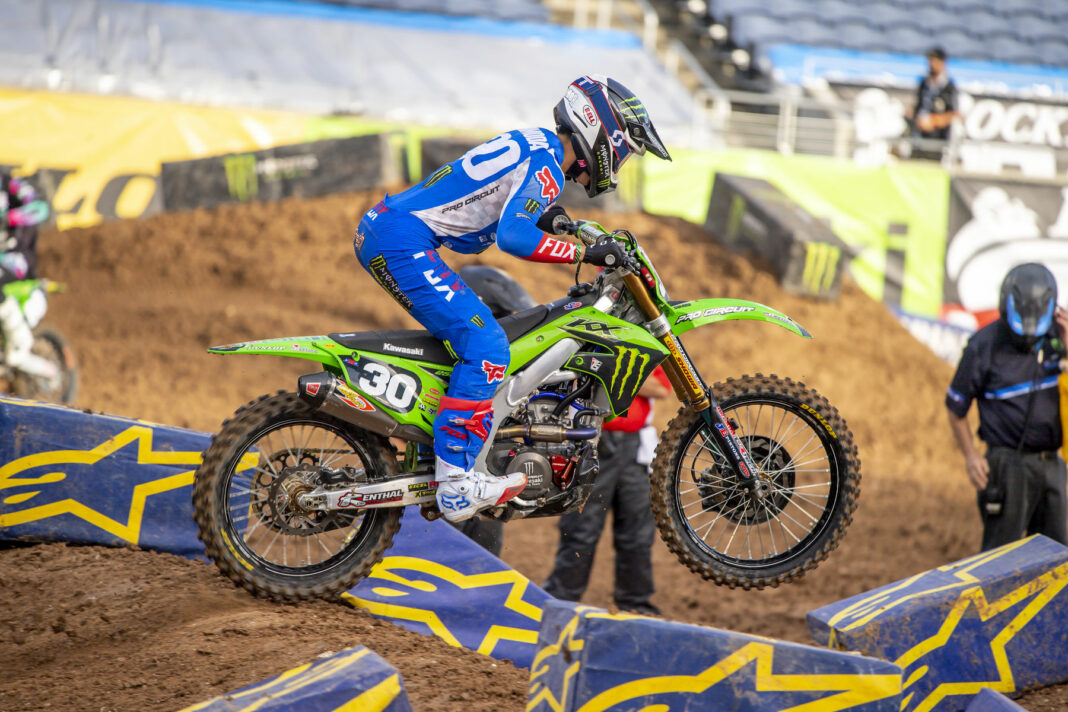 Bull KTM’s Marvin Musquin took the Monster Energy Supercross 450 class win last night in Salt Lake City, his first since 2019, with one round remaining in 2021.

Heading into the 250SX heat race one, we saw the return of the Monster Energy Star Racing Yamaha’s 250SX championship leader Colt Nicholls, as he hole shotted but not without nearly over shooting the first corner. Meanwhile privateer frenchman Thomas Do had a great second place finish ahead of Michael Mosiman.

Christian Craig had a real bad start and just rolled the track for the first lap heading into heat race two, as he then pulled in due to struggling after the earlier crash in qualifying and led to him pulling out of the main event completely with a suspected broke ankle. This left the door wide open for Jett Lawrence which let him holeshot, and continued on to take the win followed by Pro Circuit Kawasaki’s Jo Shimoda.

Jo Shimoda grabbed the 250SX Main event hole shot, just as Nichols had quite a bad start pushing him down to seventh in the first few laps. However Jett Lawrence charged through the pack at this point, making some easy passes on Thomas Do to move up to third. Mosiman, Lawrence and Shimoda played the back and forth game for the rest of the moto, just as Nichols puts in the fastest lap of the race trying to play catch up. Mosiman makes a mistake which allowed Jett Lawrence to move up into the second, as Jo Shimoda claimed his first ever 250SX Main event win. This means the 250SX Championship crown will be decided in the final round next weekend.

You can see Craig’s crash below:

The Red Bull KTM 450SX Championship leader Cooper Webb hole shotted heat race one, as team mate Marvin Musquin pushed behind just a little too much as he handed his second place over to the Monster Energy Star Yamaha Aaron Plessinger after making a small mistake. Justin Barcia however also made a mistake which led to a crash, and resulted in a DNF and a LCQ win as the rads had been damaged.

Monster energy Kawasaki’s Eli Tomac grabbed a great hole shot and a great win heading into heat race two for the 450SX Class, as Malcolm Stewart chased hard on his tail followed by Dylan Ferrandis. However all eyes were on HRC Honda’s Ken Roczen, as the points battle continued between him and Cooper Webb. as we then saw kenny finishing third in the heat race, a fair way behind Malcolm Stewart.

Ken Roczen opted for a strange gate pick tonight in the 450SX Main event, going tight on the inside corner which paid off to give him a huge holeshot. Meanwhile its not been Justin Barcia’s night tonight as he went down on the first corner and also later on in the moto, leaving him dead last. Fastest qualifier Eli Tomac also washed out coming past the mechanics area, which dropped him way down to tenth. Malcolm Stewart put the pressure on Cooper Webb but just made a small mistake which allowed him to pull away, as Roczen had a huge off just before the whoops throwing the lead away to Marvin Musquin and letting his team mate Chase Sexton go through. Musquin then claimed the main event win, in front of his team mate Cooper Webb which means the championship decider gets carried onto next weekend.

Check out the moment below Kenny threw away his race lead:

You can check out all of tonight’s race results HERE.