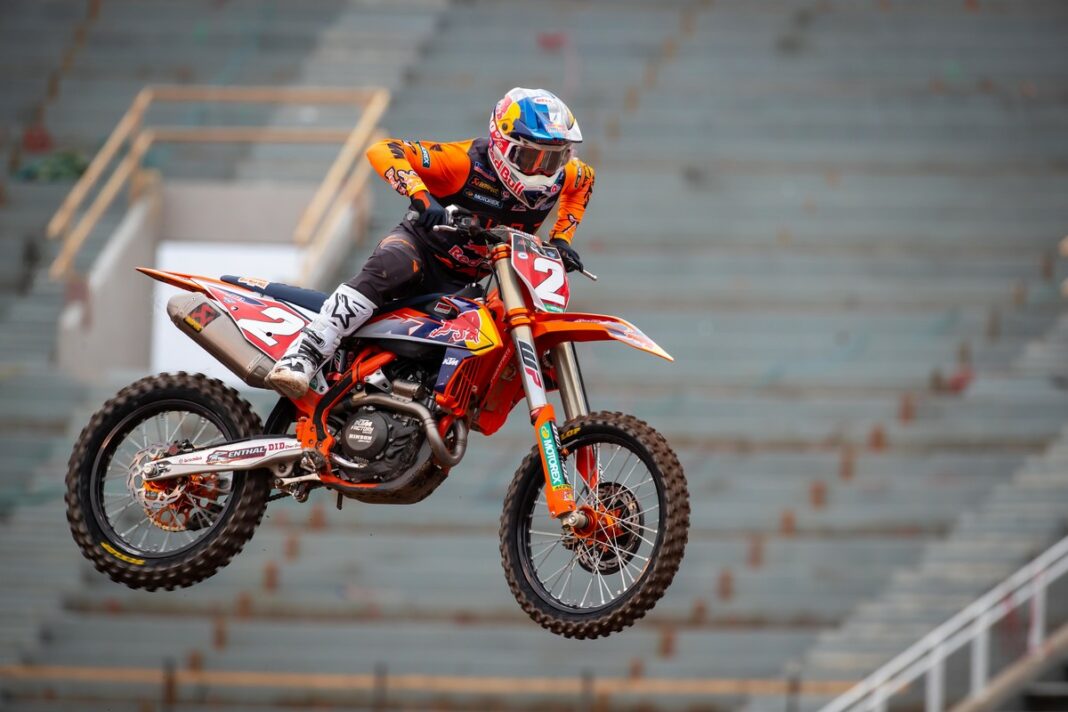 2021 was the fifth consecutive season that the 450SX Class title came down to the final race, and when the gate dropped Marvin Musquin, the winner of the previous round, crossed the holeshot stripe first.

Team Honda HRC’s Ken Roczen jumped past Musquin through the first rhythm section, and one section later Cooper Webb darted past Musquin into second. Webb needed only to finish 19th or better even if Roczen retained the lead, but Webb didn’t look interested in anything but a win. Webb and Roczen battled close and fierce in the opening laps, slowing themselves so that the pack stayed right behind them.

A minute and a half into the 20-minute plus one lap race Sexton secured third and pushed up to Webb’s rear wheel. Two minutes later Sexton flew past Webb in the whoops and set his sights on his teammate in the lead.

At just past the five minute mark Sexton took over the lead and pulled a comfortable gap. Twelve and a half minutes into the race Webb forced the issue and bumped his way past Roczen on the sweeping first turn to take over second. Musquin took advantage and also got around Roczen at the end of the following straight.

Things went from bad to worse for Roczen and he slowly fell back through the pack, eventually finishing in tenth position. Unless something wild happened, Webb was in no risk of losing the title even with a DNF; that’s when the 2019 Champion put in another trademark late race charge and caught the rookie.

With less than four minutes left on the race clock Sexton lost traction exiting a corner and Webb pounced, passing him down the next section and holding on for his eighth win of the season and earning his second Monster Energy Supercross 450SX Class Championship title.