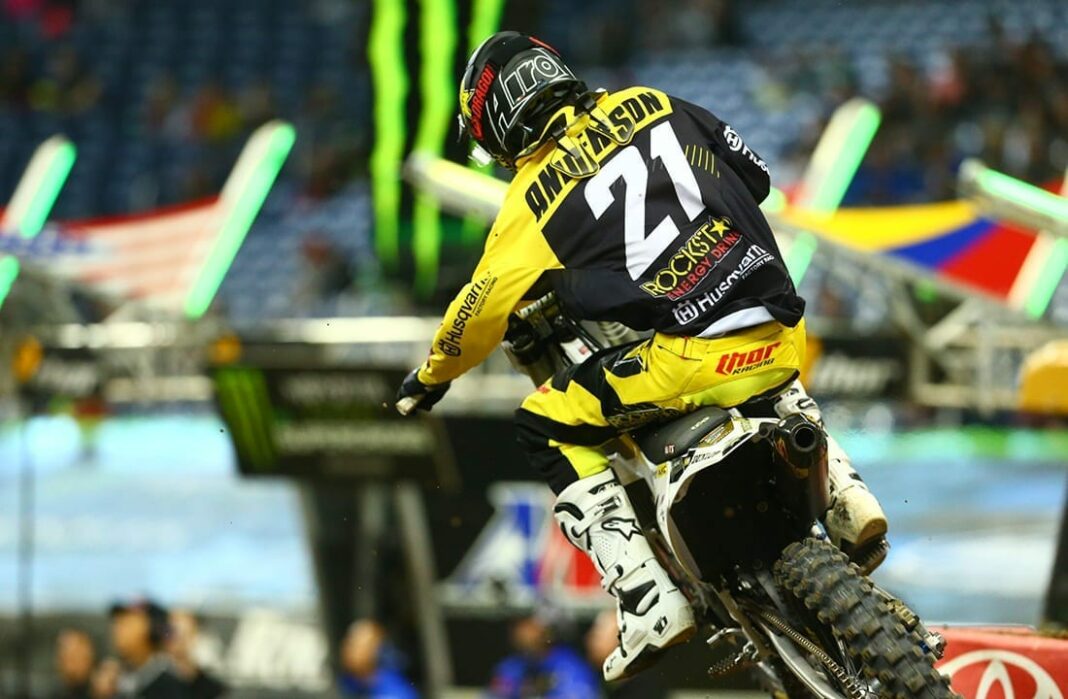 In front of a crowd of 46,259 inside Ford Field a controversial finish in the 450SX Class saw Red Bull KTM’s Ryan Dungey take the chequered flag, only to later be penalised two positions due to an on-track infraction.

In the Eastern Regional 250SX Class, GEICO Honda’s Malcolm Stewart became the fourth different winner in as many races, dominating en route to the second victory of his career and seizing control of the championship lead.

Dungey began the 20-lap Main Event by earning his fifth SupercrossLive.com Holeshot Award of the season, but he quickly lost the spot to his Red Bull KTM team-mate Marvin Musquin.

That change of position didn’t last long as Dungey reclaimed the lead on Lap 1. Musquin settled into second while BTO Sports/WPS/KTM’s Justin Brayton and Anderson battled for third, with Anderson gaining the advantage on Lap 4.

On Lap 7, Dungey approached a red cross flag for a downed rider, requiring riders to roll each jump until clear of the incident. The championship leader failed to adhere to the flag and as a result was penalised two positions by race officials.

Racing continued and a mistake by Musquin on Lap 17 put the Frenchman on the ground briefly, forcing him to lose second to Anderson.

Dungey went on to take the chequered flag but Anderson would be awarded the win. Anderson earned the first win of his career at the season opening race in Anaheim, California, in January.

Last week’s winner Ken Roczen, who currently sits second to Dungey in the championship standings, overcame a start outside the top 10 to put his RCH Soaring Eagle/Jimmy Johns/Suzuki Factory Racing machine in sixth.

Dungey’s points lead extended to 39 markers over the German rider. Anderson solidified his hold on third, moving to within 53 points of Dungey and 14 of Roczen.

The 15-lap Eastern Regional 250SX Class Main Event began in dramatic fashion with Yamalube/Star Racing Yamaha’s Aaron Plessinger edging out Monster Energy/Pro Circuit/Kawasaki’s Arnaud Tonus for the SupercrossLive.com Holeshot Award ahead of Stewart. Behind them, championship leader Jeremy Martin found himself on the ground after making contact with Monster Energy/Pro Circuit/Kawasaki’s Tyler Bowers, with both riders remounting at the tail end of the field.

Tonus was able to slip past Plessinger to assume the early lead, and with Stewart in tow the top three opened an early gap over the field. Stewart made his way past Plessinger into second on Lap 1 and a couple laps later rode past Tonus in the whoops to assume control of the lead. After losing second to Plessinger, Tonus crashed in the whoops and out of the race on Lap 4, giving third place to Troy Lee Designs/Red Bull/KTM’s Shane McElrath.

With Stewart in full control of the race, the championship experienced a dramatic shift when Martin crashed again after battling his way back to regain several valuable positions. He would soon fall a lap down to Stewart but used it to his advantage, following the leader as he put additional riders a lap down to pick up positions with ease.

Stewart led the final 12 laps to continue the parity heavy start to the Eastern Regional title fight, while Plessinger grabbed the best finish of his career in second. McElrath earned his first podium result of the season in third and became the seventh different rider to finish on the box in four races.

“This means a lot. GEICO Honda has stuck behind me and having an opportunity to ride with them again this year is paying off,” said Stewart, who is now lead the championship for the first time in his career. “I’m excited and shook up about taking over the points lead. Having the red plate [as the points leader] for the next race is going to be awesome.”

Martin’s 13th-place finish combined with the absence of last week’s winner Justin Hill, who was forced to miss the race following a crash aboard his Troy Lee Designs/Red Bull/KTM in practice, vaulted Stewart from third to first in the points. He now holds a seven-point leader over Martin in the championship standings, with Plessinger moving from fifth to third, 13 points back.

Monster Energy Supercross will observe its lone break in the championship before returning to action on Saturday, April 2, with the 12th race of the season from Levi’s Stadium in Santa Clara, California.