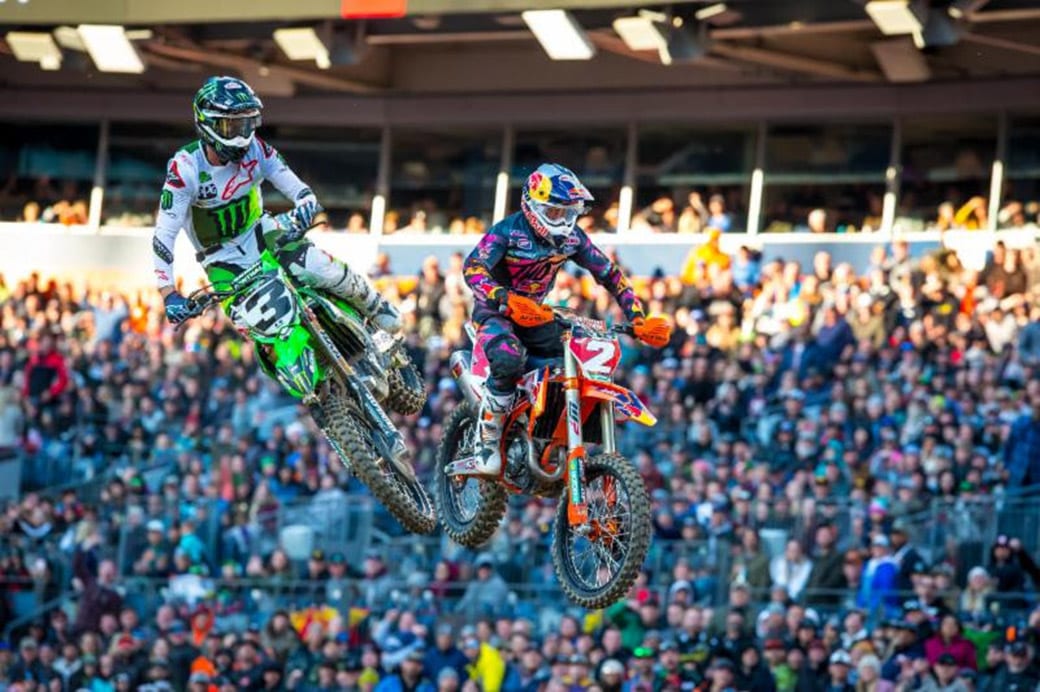 The track at Broncos Stadium at Mile High for the fifteenth round of the Monster Energy AMA Supercross, an FIM World Championship was under snow a few days prior, but conditions were dry for racing as Kawasaki won both classes in front of 59,718 fans who braved the cold night at 5280 feet of elevation.

Monster Energy Kawasaki’s Eli Tomac put on a dominating show in Denver, a hometown race for the Colorado racer and at a venue that’s only been on the schedule once before, 23 years ago.

With the win Tomac pulls to within 18 points of the title with two rounds left. In the penultimate round of the Western Regional 250SX Class, Monster Energy/Pro Circuit Kawasaki’s Adam Cianciarulo had a near perfect night and won the Main Event to stretch his points lead from five to eight. It was the fifth time Kawasaki has won both the 450SX and 250SX rounds in the same night this season – the record for most dual-class sweeps in a season was set in 1991 by Honda.

Tomac sat around sixth and wasted no time diving under Red Bull KTM’s Cooper Webb for fifth. The two title contenders had had a great battle in their Heat Race, but in the Main Event Tomac passed and pulled away. Two and a half minutes into the 20 minute plus one lap race Tomac got around third place rider, Team Rocky Mountain ATV/MC KTM WPS’ Justin Bogle, and set his sights on his team-mate Savatgy – it took Tomac one minute to catch and pass Savatgy and next target Musquin, who held the lead just over three seconds ahead.

Two minutes later Tomac blitzed by Musquin in the whoops and checked out from the field, not to be challenged for the win.

Webb got around Bogle for fourth and was right on Savatgy at just past the five-minute mark. The two riders had a great battle, with Webb gaining the position for an instant a few times, but Savatgy regaining it until the race clock reached the half way point. Webb, once past and broken free of Tomac’s team-mate, set his sights on his own team-mate Musquin, who was five seconds ahead – Webb steadily closed the gap.

With three minutes left Webb flew past in the whoops and cleanly took over second place.

He was over eight seconds behind Tomac at that point so a chance at the win was out of reach. Tomac crossed the line to the screams of the Colorado fans.

With the victory Tomac closed the championship points to 18 over Webb. Musquin dropped back to 23 points down. The only other rider still with a mathematical chance at the title, Team Honda HRC’s Ken Roczen, had a lackluster night and finished seventh, dropping back to 49 points behind Webb.

Tomac was emotional after winning in front of his hometown crowd, “I mean, that’s like what I dreamed of and that was by far the coolest crowd, best atmosphere. And they were so loud. It was like it was, just loud, like coming over the triple there, battling for the lead, it was the loudest thing I’ve ever even heard. It’s so special. [So very] cool.”

On the podium Cooper Webb said he practiced whoops during the week and felt it showed in the race. When asked if he likes the aggressive racing he and Tomac had in their Heat Race, “Yeah, in the heat it was fun. He rode great all day and he was the man today. So, I’ve got a lot of respect and, yeah, it was fun in the Heat Race. We went back and forth a little bit, but unfortunately in the Main I wasn’t up there to do that.

“I didn’t get a bad start but kind of was being a little too nice in the beginning and Eli made the passes and made ’em stick and got to the front, and I got stuck going two seconds off the pace. You know, once we got around Joey it was good to lay some laps, and I was happy with that. I really rode well once I got around him and caught Marv and was able to pass him. I felt like I was able to at least be in Eli’s, I don’t know [as fast as his] times, but in his realm by the end. It’s tough, we want to win, but it’s – this track was really hard to pass on, it made for some tight racing. But I enjoy it, it’s fun and like I said, [we’ll] keep it going and hopefully be up there battling for the win [at the next round].”

Musquin earned a podium finish, but the frustration was clear on his face and in his voice for finishing third in a race he’d led. “It was a very difficult track. With altitude and everything I was struggling. It was very difficult, and I had nothing for Eli and for Webb, so it’s difficult but I give my best and I try to get better. I get better but it was tough on me, but thanks to Frankie and the whole team, everybody around me…

“We made some changes for the main. It was a little bit better, but not enough – but better to at least get on the podium. But I had nothing for those guys, so congratulations to them. A third right now, today, is good considering the Heat Race [where I was] struggling very bad. Man, it was a very difficult track. I’m looking forward to a better weekend.”

In the close-fought Western Regional 250SX Class Adam Cianciarulo was the fastest in qualifying, won his heat, and took the victory in the Main Event. He did everything perfect except grab the holeshot, but he came out of the first corner in second, right behind Rockstar Energy Husqvarna’s Michael Mosiman.

JGRMX Yoshimura Suzuki’s Jimmy Decotis was behind them with GEICO Honda’s Cameron McAdoo in fourth and title-challenger Monster Energy/Star Racing/Yamaha’s Dylan Ferrandis back in fifth. As the top three pulled a small gap on the field, Cianciarulo struggled to get past Mosiman. Five minutes into the 15-minute plus one lap Main Event, Cianciarulo battled side by side with Mosiman for three lanes before making the pass stick.

At that point Ferrandis was 3.4 seconds behind and neither gaining nor losing time to Cianciarulo. 10 minutes into the racing Ferrandis got around Mosiman in a back and forth battle through several corners.

But by then Cianciarulo had over a seven second lead and brought in the win.

Monster Energy/Star Racing/Yamaha’s Colt Nichols made his way into third with about two minutes left on the clock. The Western Regional 250SX Class riders have only a single round left in the season to determine the champion, and that takes place in a 250SX East/West Showdown at the final event in Las Vegas on May 4.

Cianciarulo has a great history at the Las Vegas track, but with only eight points between he and Ferrandis the title is far from decided.

Adam Cianciarulo was, naturally, happy right after the win. He commented on how the altitude robs power from all the motorcycles – roughly a 10 to 12 per cent power loss, “It’s crazy. At altitude here we have to start in first gear, which we’re not usually used to, which means for me I have to shift second really fast, especially being a little bit of a bigger guy. The problem with that is trying to get my foot on the peg while still staying forward – I have a tendency to either double clutch or wheelie.

“So, the first obstacle was to get the start out of the way, and man, Michael Mosiman has been riding so good the last couple weeks, shout out to him. He really battled me for that win, a little more than I wanted to, but great to see him not scared and not backing down out there. But going back to what I told you earlier, I feel like I’m always at my best when my backs against the wall.

“It was a great night all around, so thanks for everybody out there supporting me, hopefully we put on a good show for you guys and we’ll see you in Vegas.”

Dylan Ferrandis said the cold weather was the factor that most affected him. The day began with a light snowfall and the night was in the mid 30s for the Main Event, “AC took a good start and me, not so good, and the track was really difficult to pass on tonight and that cost me a lot of time and I’m so frustrated right now. It’s a bad night for me, losing three really important points for the championship. AC was on all day today and I struggled a little bit with the cold – not with the attitude, I’m fine with that – but with the cold.

“It was so cold today, I always took [extra] time to get warm. And I don’t know, just a bad night for me and the team. We’re going to have to find extra, something extra for us to win this championship. For sure we’re going to give everything, and we’ll fight to the end.”

Colt Nichols, finishing third, was satisfied with his riding, “I definitely had to battle hard and it was tough up here. I definitely had to work. I lined up right next to Adam thinking maybe I could get on the inside of him, maybe push him out a little bit. But I just messed the start up on my own and it was just completely my fault…

“The bike felt awesome, even though being down on horsepower [due to the altitude]. Yeah that was tough I really had to work for it. I’m happy leaving. I felt like I rode like myself, just didn’t really start where I wanted to. But that’s all right, we’ve got one more round, Las Vegas, coming up and I just want to go out there and give my best. But I’m leaving this race happy knowing I left it all out there on the track and that’s about all I can do.”

The Monster Energy Supercross series takes one weekend off then picks up again on April 27 where the 450SX Class and the Eastern Regional 250SX Class descend on MetLife Stadium, an open-air football stadium in East Rutherford, NJ, for the penultimate round of both of those classes.