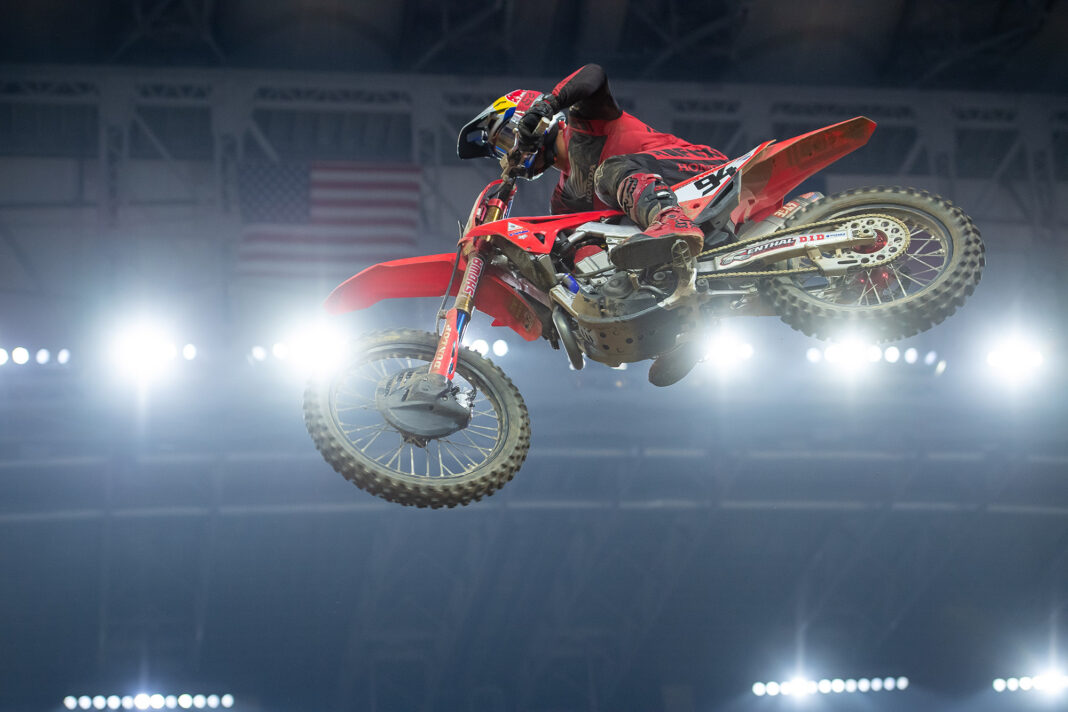 Ken Roczen grabbed his first Main Event win of 2021 last night in Indianapolis, becoming the fourth man in as many races to stand on the top step of the podium. It wasn’t an easy ride for the German though, he had to fight tooth and nail for his victory and actually had to pass for the lead on two separate occasions.
After Eli Tomac crashed out of the leading spot on lap two Roczen was left hunting down his riding buddy, Adam Cianciarulo for the race lead. But Tomac would soon recover to join the party and transform the battle into a three-man fight, ‘‘After Eli Crashed, Adam and I were out front’’ said Roczen, ‘‘ I made a couple of attempts to pass but after that I was a little bit further back and not in striking distance. We were kind of yo-yoing a little bit and then I could hear Eli coming.
I had to start riding defensively a little bit, which hurts you as the front guy takes better lines and you’re losing touch a little bit. It took me a couple of times, but I was able to dive to the inside. It was a good battle between all three of us.’’

At around the halfway mark Roczen pulled the trigger and was able to make a pass for the lead on Cianciarulo. Eli Tomac followed in his footsteps and the pair dropped AC, making it a two-way fight for the win.
Ken began inching away from the reigning champion, but with a handful of laps still to go he made a costly mistake on one of the big rutted double jumps, ‘‘I got cross-rutted and jumped to the left. I was trying to decide in the air if I could still tuck in and stay on track when I landed, but I would’ve hit the tuff block. So, I went all the way around and I missed the whole wall. I felt it would have been wrong to stay in front of Eli, so I let him by and capitalised a few turns later. I knew the AMA would have a close eye on that one, so I had to make the right choice.’’

Ken’s sportsmanship could’ve cost him the race win, but he was able to bounce back to re-take the lead almost immediately, ‘‘Honestly, I was just trying to stay there with him as I didn’t want that incident to be the decider. I just found an opening and took it without actually planning it. It was an instant decision.’’

Despite being the points leader coming into the weekend Roczen entered the race with perhaps a little chip on his shoulder. After two frustrations in a row (a points deduction from the AMA, and an incident with lapped traffic), it would’ve been a fair assessment to say that Roczen was extra motivated coming into the Indianapolis residency.
‘‘I just have huge motivation to win in general. It had nothing to do with the last couple of races.’’ Admitted Roczen in the post-race press conference, ‘‘What happened the last couple of rounds I have honestly forgotten about. It got hyped up a lot as it was a big deal, but I was over it way before everybody else stopped talking about it. I just wanted to win tonight.’’

Ken isn’t allowing his early season success to affect his approach to racing, ‘‘I am just trying my hardest. I don’t want my mind to work like that at all. Coming into this season I wasn’t sure what to expect, as I changed pretty much everything within me and my program. Well not everything but a lot. I just wanted to see where I was at and enjoy the process. I put the ego aside and just wanted to rebuild my image and career a little bit, so that’s what I did.’’

The Main Event in Indy was one of the most fun races to watch in a long time. The three-way fight between Roczen, AC and Tomac was one to remember and then the drama in the closing laps added a sprinkle of magic on top of what was already a great race. The riders all seemed to acknowledge that this was a fun one to be a part of, ‘‘Yeah it’s fun, otherwise I wouldn’t do it. Having a family now makes things much better. There is something about the sport that makes us keep coming back, but right now it feels like a bit of a new beginning. Now we are doing it as a family it makes everything all that much sweeter.’’

Ken Roczen has won many races in his day, but this was his first victory as a father, ‘‘It was the greatest thing ever. Seeing them there was awesome. He is such a smiley little thing. Its difficult to explain to someone who doesn’t have kids. It just gets better and better every single day. It just makes my heart smile. We are all in the semi, changing diapers between the practices. It kind of eases everything up a bit.’’

Ken Roczen leads the 450 championship fight with a six-point cushion over Cooper Webb.