Home Supercross AMA Supercross Indy SX: ‘It sucks that it had to end like that’ –... 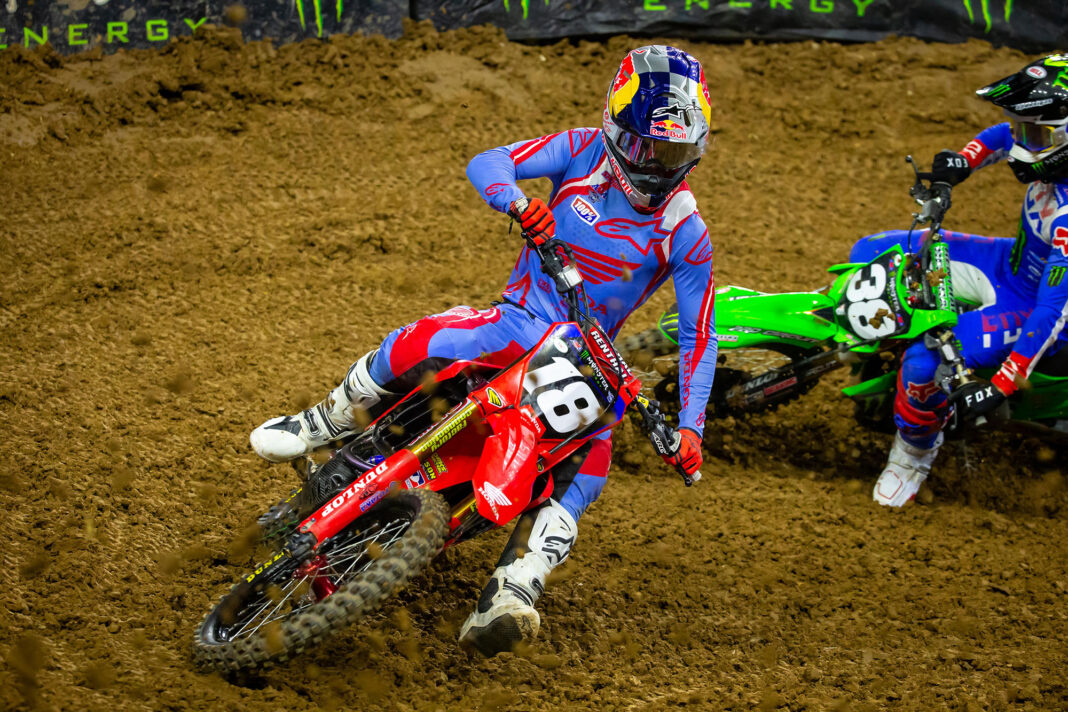 Jett Lawrence is a master of making headlines. The Australian wonder boy has had everybody talking so far in 2021. From his dominant race victories to his controversial take-out manoeuvres, the HRC Honda pilot is quickly becoming the center of attention in the 250 East division- despite being more than 12 points behind in the championship chase.

Lawrence is without doubt one of the most exciting riders in the sport at the moment. The lightning-fast teenager continued to electrify last night in Indy. After a terrible start in the Main and an early race mistake Lawrence furiously fought his way to a top five position from outside the top ten.
With three and a half minutes on the clock Jett had Jo Shimodoa and Michael Mosiman (his new nemesis) in his sights. The Australian scrubbed past the man from Japan before making a slick pass on Mosiman for third.

If the race finished there that would have been an incredible ride for Jett. But the wonderkid wasn’t done yet.  Lawrence was pushing hard and quickly caught the rear-wheel of second place man Christian Craig. With one lap to go Lawrence launched an all-out attack on the veteran rider in the hopes of taking over the second-place position. Craig made a slight mistake and wasn’t able to triple into the main rhythm section. This allowed Lawrence to pull the trigger on a potential overtake. Jett went for the pass, but the veteran saw it coming and attempted to protect his position.

This was an ill-fated decision by Craig. In his attempt to push Lawrence wide in the next corner he ran both himself and Lawrence into the tuff blocks and of the track. Knocking both riders off the podium.

Jett was obviously pretty gutted with this outcome and was visibly pretty shaken during his post-race interview. But a roar from the crowd really lifted his spirits, ‘’A big shout out goes to the crowd, they are awesome. I’ve got to thank them heaps; those guys made this ten times better’’ said Jett.
‘’I had a really rough start, I clicked into false neutral, and then on the wall jump I thought I was going to hit the guy in front of me, so I stopped. I’m an idiot for doing that.
It made my night hard, but I put in a really good ride. I was pushing the whole time. I thought I could get Christian in that last turn, but we came together. I wasn’t too phased, but we just got tangled up and we just kept going.
I was bummed because I put my heart into that race. These three rounds are really, really important. So it sucks how it has to end like that.’’

Lawrence was characteristically gracious despite his troubles. This combined with his never say die attitude on the track are just two examples of why Jett Lawrence is quickly becoming a fan favourite. He now sits 13 points behind Colt Nichols in the championship chase, but he’ll be looking to bounce back strong on Tuesday. The last time we raced on a Tuesday the Jett was pretty damn dominant…