Home Supercross AMA Supercross Indy SX II: ‘I haven’t gone back to back in a really... 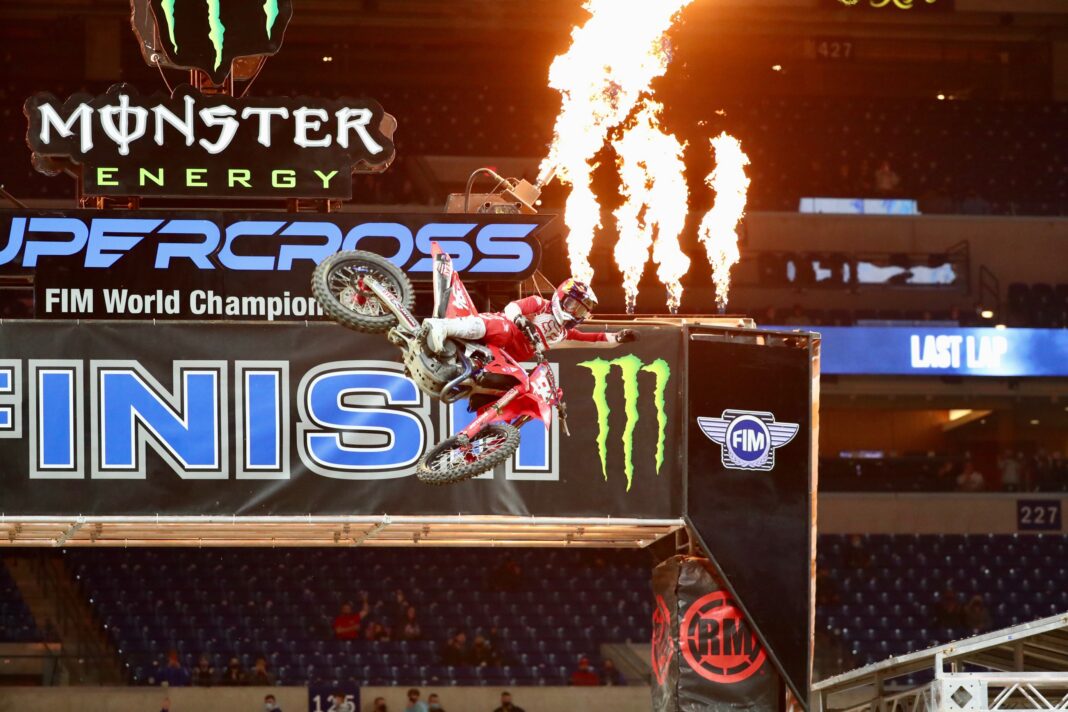 This year’s Monster Energy AMA Supercross tour has settled into the second of three rounds hosted at the Lucas Oil stadium in Indianapolis this afternoon, and boy it didn’t disappoint.

Despite the chilly temperatures the races soon got things heated up as the gate dropped on the first race of of the evening, the 250SX Class.

Monster Energy Star Yamaha’s Christian Craig has given a strong performance throughout today’s Indianapolis qualifying, it came as no surprise him being out at the front of the pack after the first corner.

The bad luck continues for the Aussie youngster Jett Lawrence, as he gets tangled up with Shaw after he drops it in the first turn, leaving Lawrence way down the pack. Now this is where it gets interesting.

We saw Jett earlier on in qualifying having that huge off in the whoops section, but to then have another huge crash involving a Tuff block in the corner after the whoops section (as you can see in the video below) This then puts Jett in the LCQ, which of course he won, but it was revealed just before the start of the 250 main event that Jett would not be riding.

Heading into the 250SX Heat two, We saw the Monster energy Star Yamaha rider of Colt Nichols out front, Whilst the one to watch was Joe Shimoda. After his amazing performance at the first indianapolis round last saturday, Shimoda seemed to have the fire in his belly to push back through the pack after making a mistake on the table top, which caused a few riders to go down, but still managed to bring it home in third and into tonight’s main event races.

Moving onto the main 250SX Event, Mosiman grabs a storming holeshot ahead of the Yamaha duo Nichols and Craig, Using the jump to his advantage, Whilst the carnage was happening mid pack between the likes of Shimoda, Miller, Short, Osby & Schlosser which caused them all to fall in the first turn, Putting the fan favourite Shimoda back down in 11th position with his work cut out. Meanwhile Miller falls in the rhythm section, causing Mosiman to make accidental contact throwing him off line. Whilst as much as the fallen riders were wishing the race to be over, its seems there was an issue with the chequered flag system as Nichols came round to the finish jump (Expecting the last lap flag) Only to get the finish flag instead, Finishing the race a lap early.

Red Bull KTM’s very own Marvin Musquin seemed to be back into his groove tonight at Indianapolis, Which we all know he gets some good results here. Taking the hole shot and and early lead ahead of Tomac and Barcia in heat race 1, We saw the frenchman continue on to take the win, But it seems the Tuff block’s got involved again whilst the battle between Vince Friese, Martin Davalos and Joey Savatgy continued, Freise lost his balance over a jump and then getting wedged underneath one. Moving onto heat two whilst AC and Roczen chopped and changed with each other for third place, Cooper Webb got the hole shot for a first few laps, before again (Yes you guessed it) getting tangled up in a tuff block, allowing Roczen to continue on to take the heat two win.

The 450 main was all to play for with Musquin, Tomac and AC riding well in the earlier heats this evening, And as the gate dropped we saw the Troy Lee Designs/Red Bull/Gas Gas rider Justin Barcia take the hole shot but it didn’t take long for Roczen to make the pass and continue to create an impressive 11 second lead on BamBam with 6 laps to go. Tomac was sitting behind Barcia for most of the race he has seemed to struggle this evening with making the pass, and also making a few mistakes in the earlier heats. Tomac’s team mate Adam Cianciarulo also struggled this evening with the whoops section as did the Monster star Yamaha’s Malcolm Stewart, With them both making mistakes in the whoops and hitting the deck. Fortunately, for this race the track official’s waved the correct last lap flag and finish flag to Ken Roczen, Giving him the back to back win at Indianapolis 2.

Here’s what K-Roc had to say below..