Red Bull KTM Factory Racing’s Cooper Webb made a valiant charge in the 450SX Main Event to overcome a first-turn crash and battle his way from nearly last to a top-five finish in his first official bout with the team. His team-mate, Marvin Musquin, finished a few positions back in eighth.

Both of the Red Bull KTM team-mates lined up for 450SX Heat 2 and tough starts placed them back in the eighth and ninth-place positions, with Musquin just ahead of Webb on the opening lap. The duo battled inside the top-10 for the duration as Musquin ultimately climbed a couple spots to sixth and Webb held onto the final transfer position with ninth.

When the gate dropped for the 450SX Main Event, it was Webb who got the early jump aboard his KTM 450 SX-F FACTORY EDITION, with Musquin close in tow. However, Webb quickly found himself on the ground due to slick track conditions and Musquin, who just missed the first-turn carnage, dropped to seventh at the start of lap one.

Webb was able to remount and begin his charge from outside the top-20 on the opening lap, swiftly picking off riders with each lap. Despite steady rainfall and unfavourable track conditions, Webb continued to climb his way through the field where he broke into the top-ten just after the halfway point. The North Carolina native continued to push late in the race as he set the fastest time on lap 12 en route to an impressive top-five finish at the season opener. 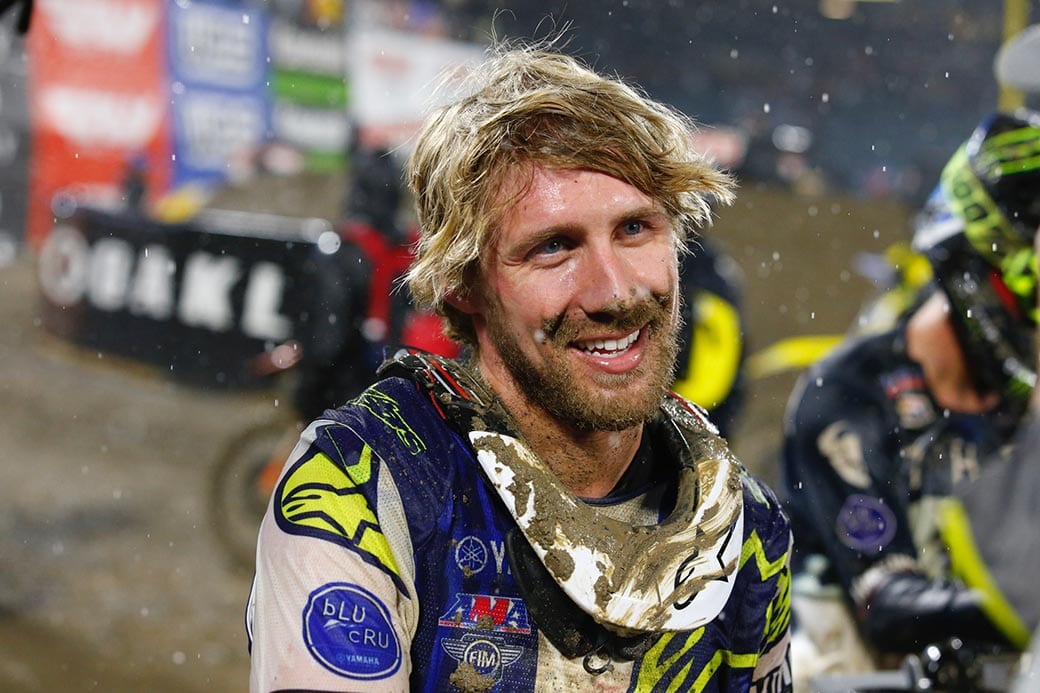 Cooper Webb: “Anaheim I is in the books and overall it was a really good day. We started with free practice just getting the hang of the track and I was able to qualify seventh.

“In the heat race, I didn’t get off to the greatest of starts and I didn’t ride to my potential, so I had a bad gate pick in the Main Event. I had a pretty outside gate but I nailed the start and I was first in the first turn but unfortunately, I fell over. It was slicker than I thought but I was able to get up and really put my head down and charge really hard to come back to fifth. I guess I had the fastest lap of the race, so that was really cool and I’m feeling confident and good with that result, so I’m ready to go to Phoenix next weekend!” 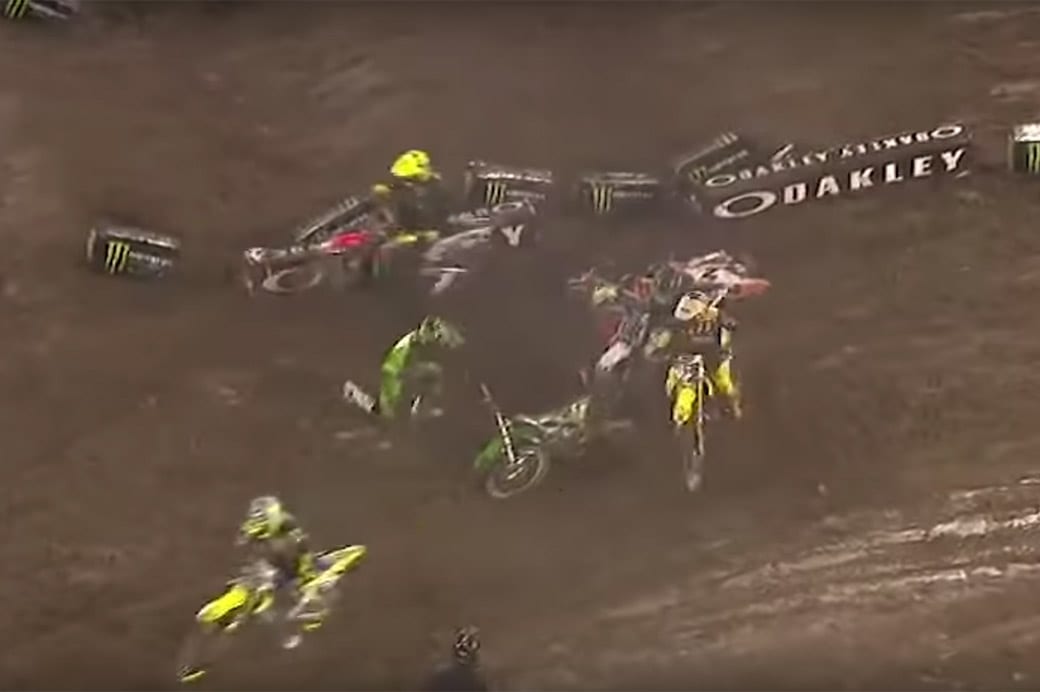 Meanwhile, Musquin battled around seventh for the first half of the race before dropping one position to his team-mate Webb just after the halfway point. From there, Musquin rode a consistent pace through the checkers to ultimately secure eighth-place at the season opener.

Marvin Musquin: “The riding was not too bad but physically it was not an easy day as I didn’t have much time on the bike this off-season. But we knew it coming in, so the goal was to score some points and I ended up eighth in the Main Event. I had a great start and Cooper did too, but we almost got into each other and he went down. I avoided him but I lost a lot of ground. It would have been a little bit easier on me to get out front – I was right there in second place behind Cooper, it was pretty cool – but almost both of us crashing. My goal, once again, was to be consistent and score points and that’s what I did. Eighth is not too bad considering and now we can move on and get better from there.” 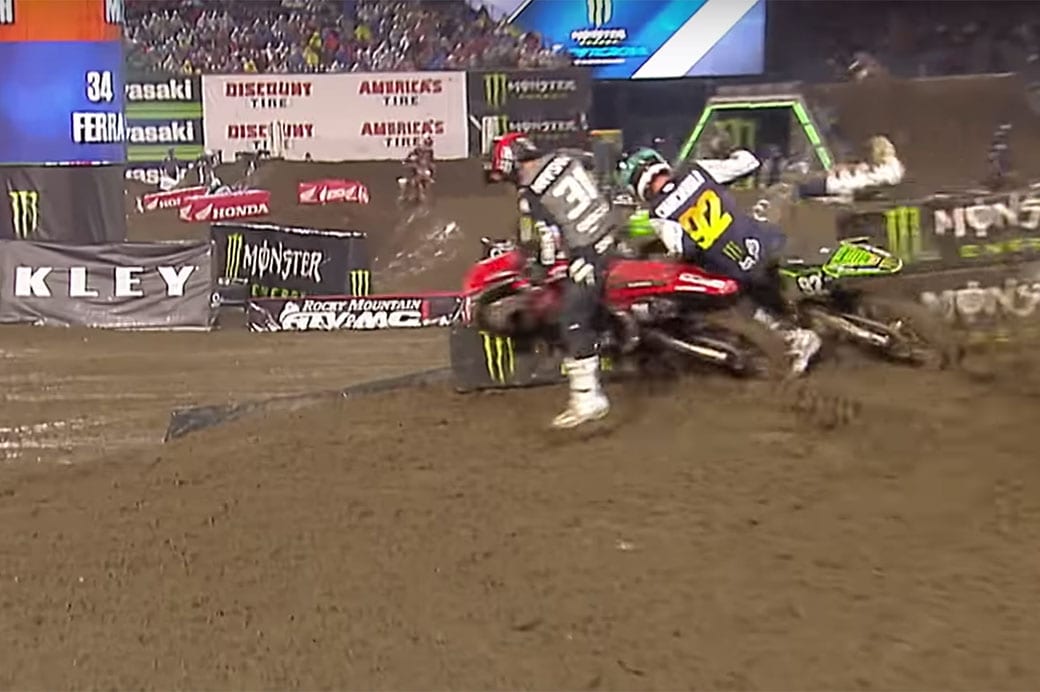 Troy Lee Designs/Red Bull/KTM Factory Racing Team’s Shane McElrath finished a solid third at the season opener, setting himself up for a favourable charge toward the 250SX West Championship. McElrath battled inside the top two for a majority of the 16-lap race but with three laps to go he dropped back to the third-place position. His team-mate, Sean Cantrell, finished 16th.

Canadian KTM Red Bull Thor Factory Racing rider, Jess Pettis, had a good showing at Anaheim, beginning with a solid fourth-place finish in 250SX Heat 1. Pettis got off to a great start in the Main Event where he piloted his KTM 250 SX-F to a top-10 finish with a consistent performance through the muddy conditions.