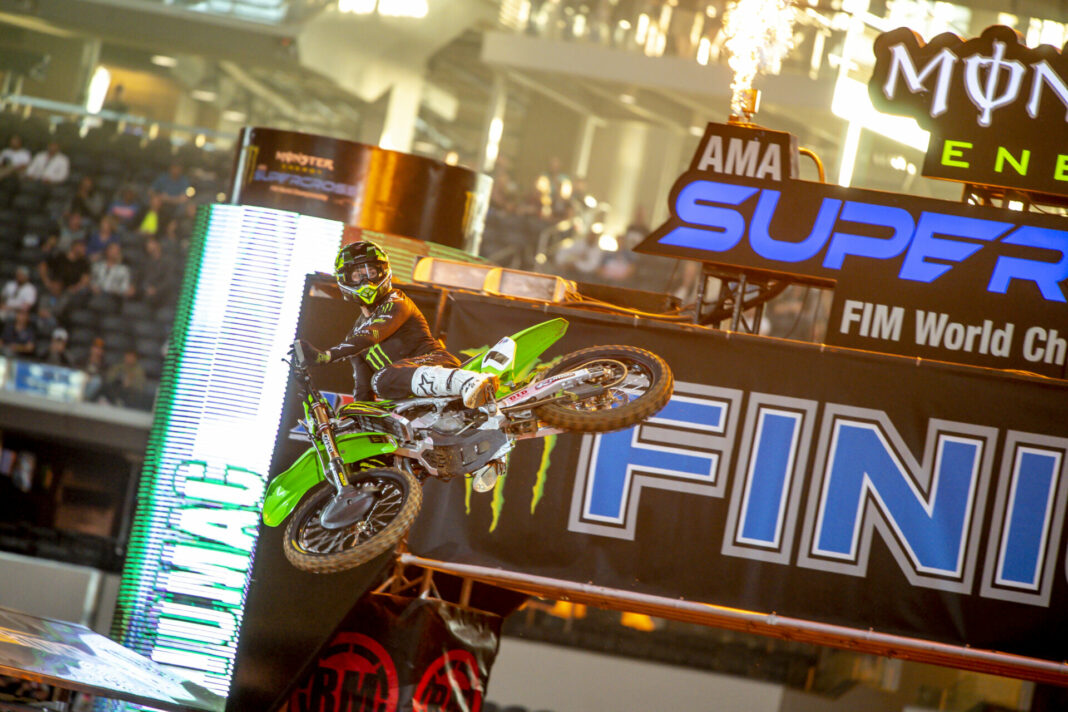 Monster Kawasaki’s Eli Tomac used speed and patience to pull off a dramatic win, his third of the season, at the first-ever Supercross event to be held at Atlanta Motor Speedway.

In a heartbreaking loss, Team Honda HRC’s Chase Sexton lead for over four laps before a run-in with a lapped rider cost him the lead with the white flag in sight.

Heavy rain caused delays and cancellations of qualifying two, which led to riders to get around twenty minutes of track time before they were thrown into the heat races and main events.

The Monster Energy Kawasaki rider Seth Hammaker grabbed the holeshot in heat race one, Whilst sliding around behind was Championship leader Justin Cooper as he goes down on the double. Just as Rockstar Energy’s Jalek Swoll went down on the face of the next jump. There was almost a layer of slime on top of the circuit, which left it hard underneath, making it difficult for riders to cut through the pack. Cooper managed to make his way back to second, just behind Hammaker.

Top 250SX qualifier Cameron Mcadoo makes it through to holeshot even after nearly half of the pack went down in the first corner, Whilst Hunter Lawrence took a huge leap to pass Mcadoo, which causes them to battle the whole way through heat two, and Hunter took the heat two win, followed by Chris Blose, and Garrett Marchbanks.

Heading into the 250SX main event, Hunter Lawrence went down trying to push through on the start and was dead last, this then let Nate thrasher through to take the holeshot and pulled away as he then charged ahead of Marchbanks, Mcadoo and Harrison. Whilst championship leader Justin Cooper just couldn’t seem to work his way back up to where he needed to be, Garrett Marchbanks went down heavy in the whoops section and struggled to get his bike started. This then lead to the young Monster Energy Star Yamaha rider Nate thrasher to fly through and claim his first 250SX Main event victory.

What a ride by @NateThrasher428 to grab is first career 250SX Main Event win here in Atlanta! 🏆 #SupercrossLIVE #DropTheGate pic.twitter.com/Fh22ug3aRm

Troy Lee Designs Gas Gas Justin Barcia grabbed a storming hole shot in heat race two, and managed to pull a near five second gap in front of Tomac in just one lap, which was surprising in the conditions, until he sling shotted himself off the bike onto the concrete at the side of the track. This then allowed Tomac to fly through to take the win, followed by Joey Savatgy and Chase Sexton.

Ken Roczen had a huge moment on the first lap but managed to push through for the heat race two holeshot, but then dropped back which allowed Plessinger, Ferrandis, Anderson and the Brit Max Anstie to push through the pack..

Monster Star Yamaha’s Aaron Plessinger was on the charge straight out the gate during tonight’s 450SX main event, followed by championship leader Cooper Webb, whilst Roczen was nowhere to be seen during the early part of the race, but worked his way back through the pack.

This then opened the gap for HRC’s Chase Sexton to close the gap on Webb and eventually make the pass. Plessinger then made a mistake and went down, which dropped him back to sixth , and allowed Sexton, Tomac and Webb to go though. This put Sexton in the lead with a couple of laps to go, after he got tangled up with a back marker, which Tomac saw the gap and checked out to take the win.

You can check out all of tonight’s results here.