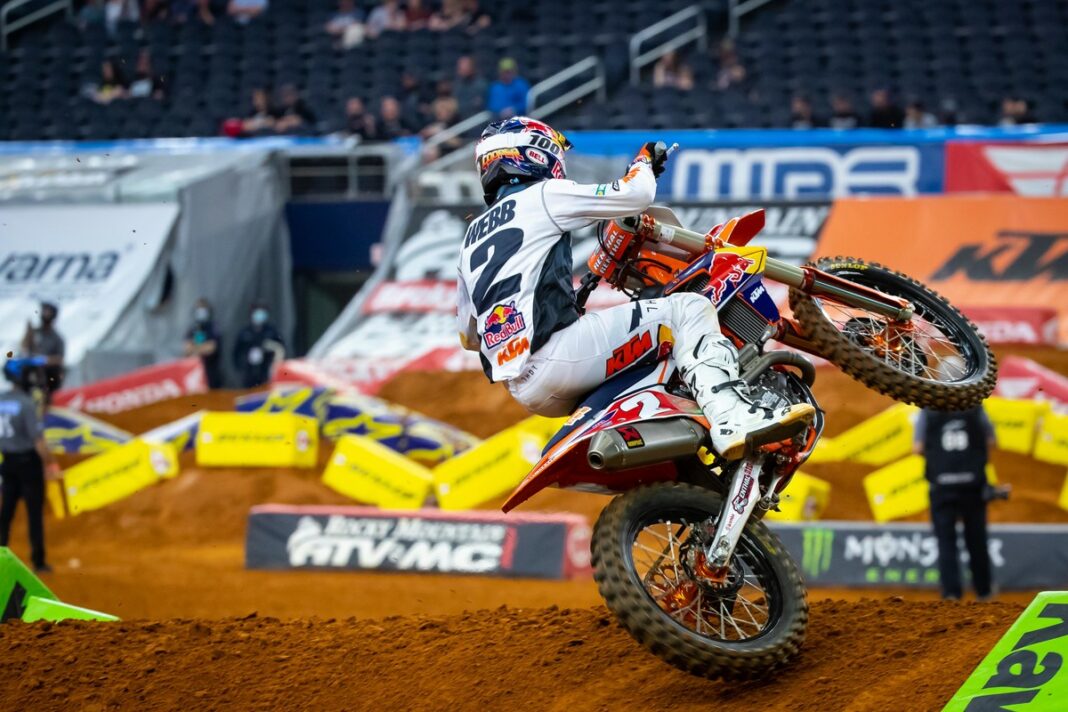 Round twelve of the Monster Energy Supercross is ready to rock in Arlington at the AT&T Stadium, with Red Bull KTM’s Cooper Webb heading for the triple win in Texas.

Red Bull KTM’s Cooper Webb extended his points lead with his 16th career 450SX Class victory and fifth of this season. He is now tied with Jean-Michel Bayle for 16th on the all-time wins list. Webb has also nudged himself into the top-25 in all-time wins (450SX, 450MX, and 250MX) and tied with Supercross legend and first ever class champion Pierre Karsmakers.

Making his 125th career start Eli Tomac cruised to his 70th podium, 90th top five, and 110th top 10 finish. After a 13th place start to his season Tomac has emerged as an outside candidate to win the title. Justin Barcia moved into sole possession of 25th on the all-time top-five finishes list with his 48th. His fourth-place finish pushed him beyond Andrew Short, Damon Bradshaw, and Mark Barnett on the list. His top-10 finish was the 80th of his career, which is good for 27th all-time right behind Broc Glover and Rick Johnson.

Kyle Chisholm continues his climb on the all-time 450SX Class starts list with #127. This moves him past Ezra Lusk for sole possession of 17th all-time. He is right behind Mike Alessi and David Vuillemin as he moves closer towards the top-15 of the list.

Rockstar Husqvarna’s Jalek Swoll cruised to his first career podium with his runner-up finish. Though in fifth place he is only 10-points behind points leader Lawrence. He has ten top-10 finishes in 12 career starts. Kyle Peters, after winning an Arenacross title, snagged his third career 250SX Class podium in his 63rd career start, and He also earned his 40th top-10 finish along the way.