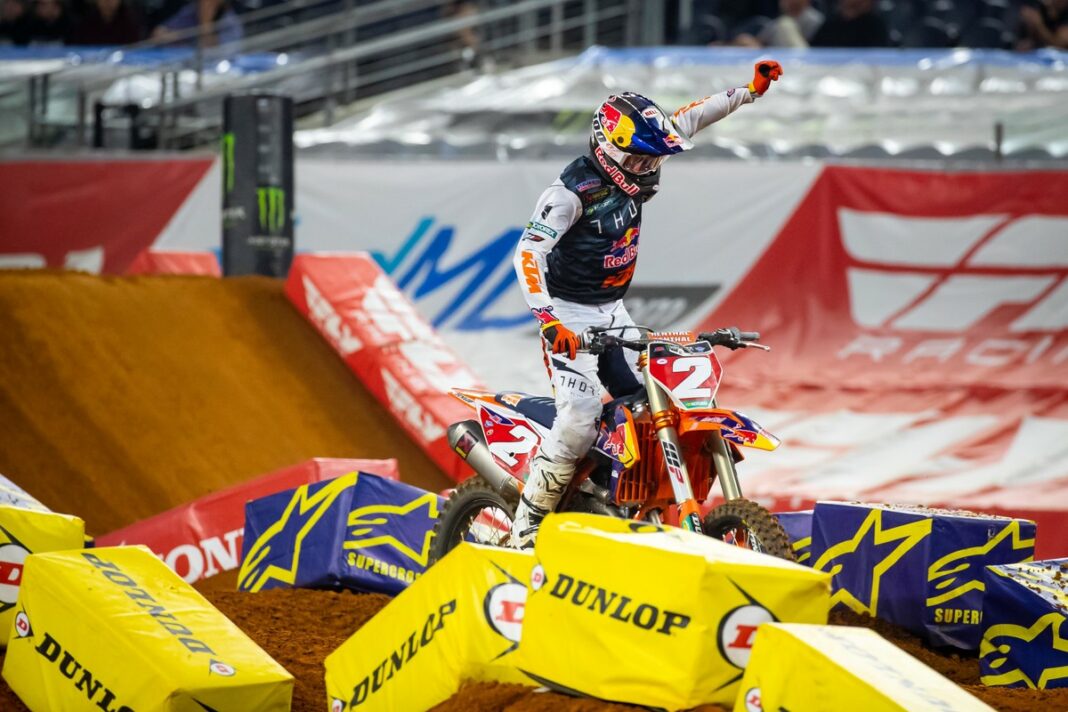 In the 250SX West class, Justin Cooper proved to be the man in a night of big crashes as he took the win ahead of Cameron Mcadoo.

The 250SX class kicked off with a bang in heat one tonight in Arlington, with a huge crash on the first lap which resulted in the Pro Circuit Kawasaki rider Jordan Smith jumping across Mitchell Harrison causing the both of them to go down, and resulted in Smith suffering a fairly visible broken arm, as his team mate Mcadoo followed on to take the win.

Justin Cooper shot out of the gate in tonight’s 250SX heat two race, making it look completely easy by taking the win with a five second lead ahead of HRC Honda’s Hunter Lawrence. Meanwhile Rockstar Energy Husqvarna’s Jalek Swoll held off Lawrence right up until the last lap, and continued to finish in third position.

Cooper followed on into the 250SX main event by grabbing a clean holeshot ahead of Mcadoo, whilst Hunter Lawrence charged on behind them to finish up in third position, as Jalek Swoll battled back and forth throughout the moto with the Pro Circuit Kawasaki rider Seth Hammaker. Ultimately the 250SX main top five finished up with Cooper, Mcadoo, Hammaker, Swoll and after a mistake from Lawrence, he ended up fifth.

Troy Lee Design’s Factory Gas Gas rider Justin Barcia grabbed a steaming holeshot in the 450SX heat race one, but soon had that lead stolen away by Monster Energy Factory Kawasaki’s Eli Tomac. Monster Energy Star Racing Yamaha’s Malcolm stewart however had a great start and bagged himself another heat race podium after finished in third.

The moment we’ve all been waiting for finally happened in the 450SX Heat race two, with HRC Honda’s Ken roczen making the pass on Red Bull Factory Cooper Webb, and then a lap later his team mate Chase Sexton completely cleaning Webb out, for Roczen to grab the victory.

Following on from his heat race Ken Roczen grabbed a great holeshot in the 450SX main event, as the first few corners consisted of him, Webb, Tomac and Barcia as they settled into the race. Tomac looked for a gap every lap to make a pass on Webb, but just kept making some silly little mistakes, and after Chase Sexton’s ballsy move on webb in the heat race, he suffered a huge off in the tricky sand section of the track which caused him to DNF.

Webb returned the favour to Roczen, making two passes against the German and then pulled a hefty gap before making a slight mistake again in the sand section, but managed to make it stick. Eli Tomac and Justin Barcia however were chopping back and forth between them, looking to close the gap on the leader, but just ran out of time. Your top four 450SX finishers were Webb, Roczen, Tomac and Barcia.

You can check up on all of tonight’s race results by clicking here.