Home Supercross AMA Supercross Arlington SX III: ‘I was the first guy to make a mistake’... 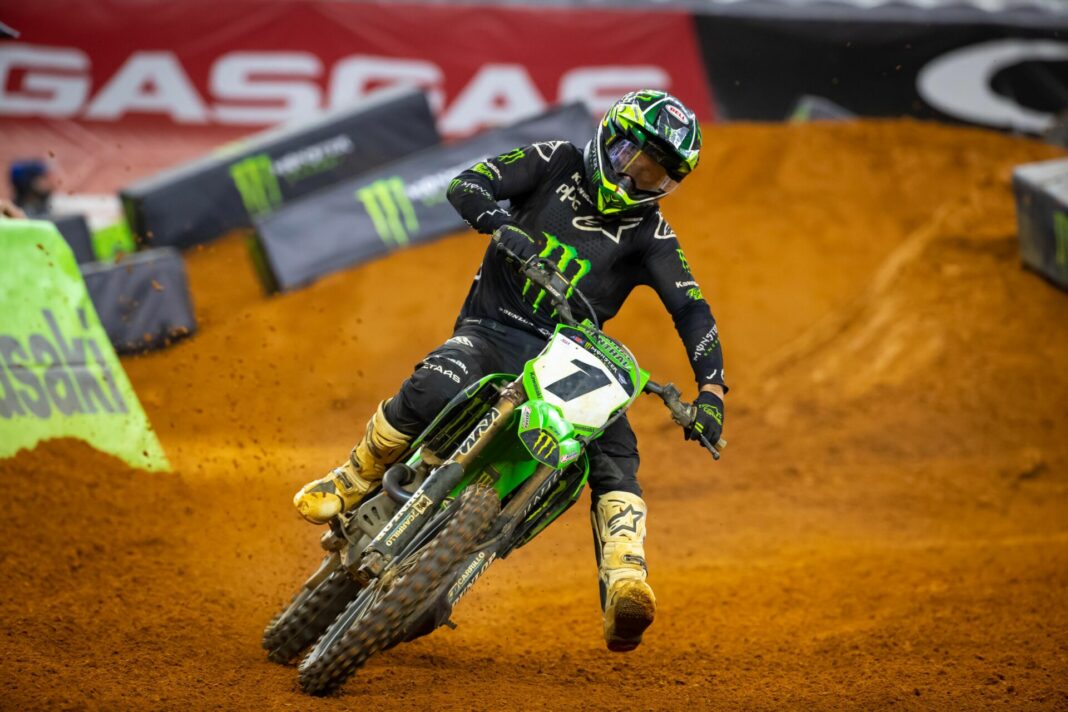 Monster Kawasaki rider Eli Tomac put on a great performance in last night’s 450SX heat races and main events, getting in the mix with Justin Barcia, and also managed to get caught up in the Cooper Webb & Ken Roczen saga in the final round of three in Arlington.

Tomsc explained the track conditions and how the layout benefitted him going into the main event.

“They had a good rhythm lane. You know, that’s where I made the pass on Justin in the heat race. I was able to go outside right to get slingshot there, and the other line was inside double, double quad if you want to call it that. And then the next the next Lane was big too, for us to clear both tabletops you know, that was nice.

“There was there was something different there tonight, the other lane wasn’t so great. I felt like I was catching guys through that 90 and then I would kind of get stuck. But hey, having to out there where we could really make up time or do something different was nice.”

“I was the first guy to make a mistake and I’ve floated a little wide on the on the finish line and bumped a Tuff Block. I still am shaking my head and thinking why I went that wide on it, but I ended up doing it, then Justin got back by me. I felt like I was just kind of settled in, you know, just waiting and that’s why I was so bummed.

“I wasn’t even really pushed in the edge that way, me and Justin went at what we know probably two or three times and then finally I got him on when he made a mistake in the rhythm.

“I look at Cooper 41 points in front and think something’s crazy got to happen at this point, I’m looking at race wins in Atlanta, its like three times Daytona again, if not bigger. So I think that’s gonna be really cool for us being different than probably anything we’ve ever seen. I think there’s gonna be even more jumps in Daytona but we still have that length of the track, So I think my riding style, the way my bike is set up, I think it’s going to suit us very well.”