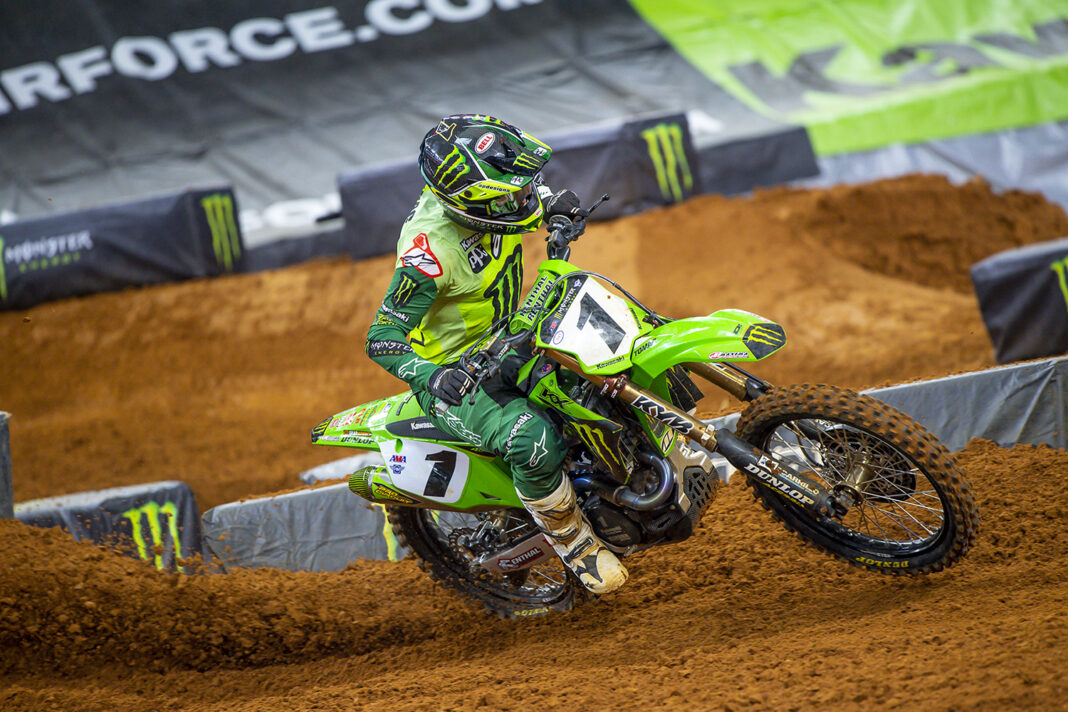 Monster Kawasaki’s Eli Tomac was back on the Monster Energy Supercross podium at Arlington II but it didn’t help his championship cause as he finished behind winner and points leader Cooper Webb.

Defending series champion Tomac kicked off the penultimate race of the three consecutive rounds inTexas by recording the fastest lap of the first free practice and both timed qualifying sessions before heading into the night program. Tomac’s qualifying time of 50.903 was the only one to break the 51-second mark.

450SX Heat 2 saw Tomac in third out of the gate, where he spent the first three laps of the race searching for creative lines to make a pass and on lap four. He was able to do just that along the far side of the whoop section and eventually finished second putting him in good position for the main event.

Tomac once again rocketed out the gate where the field of 22 riders raced down the long stadium floor all jockeying for position and by turn two, Tomac laid claim to second place.

Over the next 20 minutes, the Colorado native closely stalked the rear wheel of Webb and with four laps remaining, the defending champ attempted to make a pass for the lead but was unsuccessful and he was forced to settle for second place as the chequered flag waved.

“I would definitely say tonight was a bounce-back kind of night. This past Saturday was frustrating, to say the least, but I like these Tuesday races because it only gives you a couple days off and another chance to redeem yourself, and we did just that tonight,” said Tomac.

“I enjoyed the track layout today. I was able to find a good flow all day and put myself in a great qualifying position, and then in the heat race I got second. In the main event, my KX450 put me in a great position down that long front straight and I was able to come out in second place again behind Cooper.

“I fought the entire race and tried to find a clean line to pass him and then with about four minutes left, I was going in for the pass and grabbed a little too much throttle that caused me to spin out before the whoops which allowed him to get away just enough before the end of the race. All in all, I am happy with tonight’s performance and ready to improve on it this coming Saturday.”