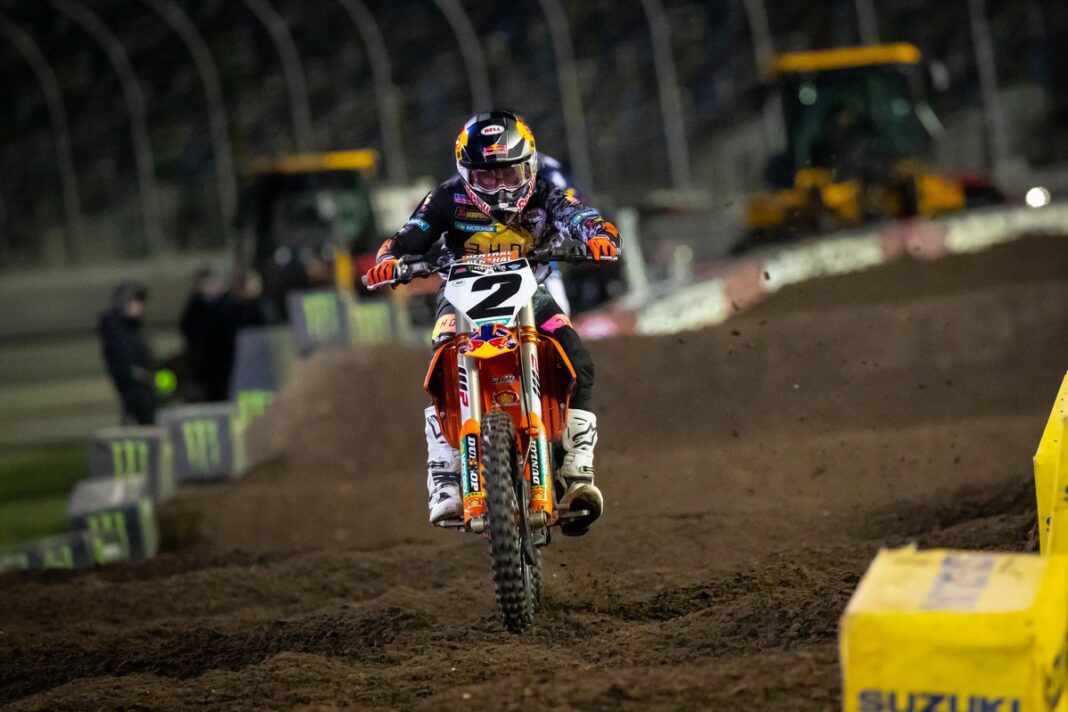 Red Bull KTM’s Cooper Webb rocketed to the top of the Monster Energy Supercross points table after securing the 450 main event win Arlington ahead of Justin Barcia with Ken Roczen down in sixth.

Troy Lee Design’s Gas Gas Pierce Brown was unfortunately out after qualifying tonight due to a broken thumb injury. The new split lane feature worked so well in Arlington and allowed riders to pick and choose a lane, with the right-hand side being slightly faster.

Hammaker battled hard with his team-mate Smith in heat one, but managed the win. Rockstar Husqvarna’s Jalek Swoll grabbed a great holeshot in heat race two, while championship leader Mcadoo pushed his way back up to second but was pipped for the win by Justin Cooper.

PHammaker and Smith headed straight out the gate together in the 250SX main event, with them actually banging bars a couple of laps in and Smith ended up getting tangled up in the Tuff Blocks, and again taking a huge tumble in the whoops section which caused him to DNF.

Meanwhile McAdoo worked his way back up to just in front of Monster Energy Star Yamaha’s Justin Cooper. Hammaker took the 250SX Main event win at Arlington one.

Take a look at Hammaker’s first 250SX podium below:

Muc-Off Honda’s Justin Brayton was back in Arlington after suffering an injury, whilst Rockstar Husqvarna Dean Wilson holeshotted 450SX heat race one with team-mate Jason Anderson just behind him, and moved on to take the lead.

Roczen pushed for third position, and had a great battle with Wilson but then crashed hard in the whoops section, which allowed Barcia to go through finishing up with Anderson, Wilson and Barcia taking your top three in heat one.

Joey Savatgy and Aaron Plessinger battled it out in heat two, with Plessinger making the pass after the whoops section after he proved how quick he was in Daytona. Marvin Musquin had a huge crash which saw him DNF, and luckily he didn’t suffer any broken bones, but had to get stitches in his arm and miss the main event.

Wilson Holeshotted the 450SX main event tonight, but got barged out the way by Webb on the first corner as he pushed through to take the lead. Meanwhile Roczen had an awful start due to a bad gate pick, which left him mid pack on the first few laps of the main event.

Wilson dropped down to fourth, his team mate Jason Anderson cleaned out Monster Energy Yamaha Dylan Ferrandis which caused him to pull in and not finish.

Taking a clear, confident five-second 450SX main event win in Arlington, you have Webb claiming his title as the new championship points leader, ahead of Justin Barcia and Jason Anderson.