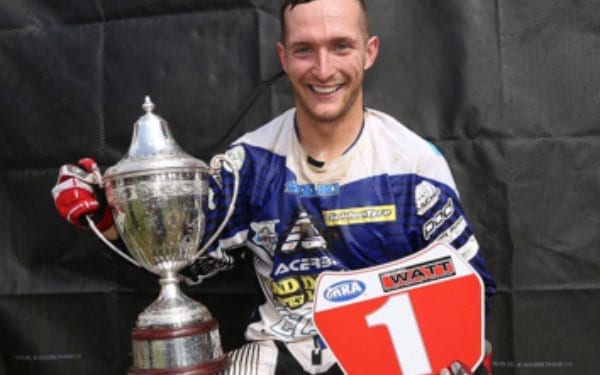 This year has been a challenging year for me. After my serious wrist injury in 2013, I’d spent most of the 2014 season playing catch-up, and with hard work, determination and a mindset to get back to where I was, I succeeded in regaining the Irish MX1 Motocross Championship, scoring top-10 finishes in the Maxxis British Motocross Championship and being picked to ride for Ireland in the Motocross of Nations where the team finished 19th.

By early December, I still had not sorted anything for 2015, and to be honest, I was getting worried. I’d spoken to a couple of people about some possible deals, but nothing was set in stone. My friend Reanne Soper put my name forward to Alex Karg, who runs KMP Honda Repsol Racing in the ADAC German Championship, who had been looking for a rider to race in the 2015 ADAC series.

We spoke by email and he offered me a deal to ride with his team in Germany. It was a deal I could not refuse; I’m always up to new challenges. I was delighted to agree terms with Alex in such a short period. After checking with his sponsors that everything was okay and they were happy to sign me up, he phoned me to welcome me to the team as their new rider for 2015.

I’m looking forward to next year; I’ve ridden the new 2015 Honda and it feels amazing. I know that it will work well with me. Unfortunately I will miss the British championship, but I will do select rounds where I can, with possibly some racing in Ireland as well. My goal is to finish high in the ADAC championship and show the team what I am capable of.

I would like to thank Alex and the entire KMP Honda Repsol Racing team for giving me this opportunity, and I’d also like to thank Reanne for putting my name forward, because this would not have been possible if she hadn’t.

I would also like to thank everyone who sponsored and supported me this year and I hope you all can still support me in my new journey in 2015.