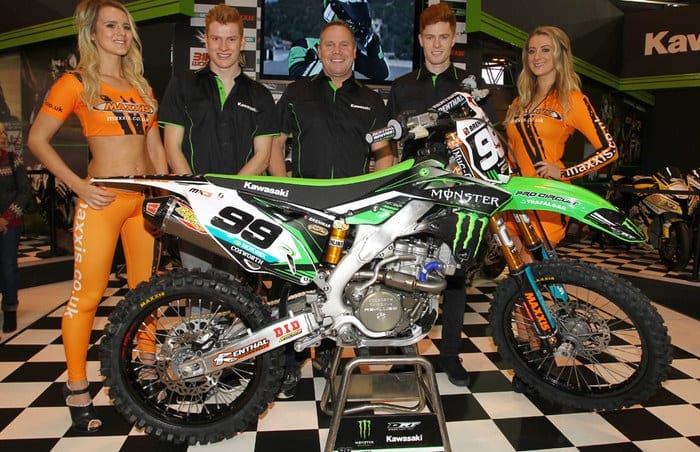 In a move that is sure to spark the interest of all motocross fans, Steve Dixon has decided to move to Kawasaki machinery in 2015 running under the Monster Energy DRT Kawasaki banner.

Having been exclusively aligned with another manufacturer for a quarter of a century, Dixon has taken the momentous decision and will field KX250F machines in both the MXGP Championship and the Maxxis British Championship in the MX2 class.

With riders and machinery more than capable of securing one or more race series at their first attempt under the lime green banner, the team also benefit from a good understanding of the Team Green concept set up thanks to rider, Max Anstie.

As a former Kawasaki competitor who started his career riding for Team Green and had huge success on the KX85 – while more recently riding for the CLS Kawasaki squad at Grand Prix level – Anstie is on a roll having won the Belgian round of the MX2 Grand Prix season in 2014; his first ever Grand Prix win.

Anstie will ride alongside Mel Pocock in the 18 round World Championship and the eight rounds of the Maxxis British Championship. Pocock who enjoys a stellar racing CV in his own right is no stranger to the Dixon fold. With the future very much in mind, the team will also continue to support 16 year old Rookie rider, Jay Hague, who will compete in the MXY2 class also on a KMX250F.

Supported by Kawasaki Motors UK, the team will be keen to impress in 2015 as they work closely with the Japanese manufacturer and also with Kawasaki tyre partner Maxxis and lubricant giant Motorex.

Having made the exciting decision, the team have been given access to KX250F machinery and are already deep in a development process with the bike.

“Having stayed loyal to one brand for just over 25 years this is a big and exciting change for my team and I,” said Steve Dixon. “I feel we are joining a company that is on a roll to achieve some great results at top level, as can clearly be seen with the introduction of Villipoto in MXGP. “It is also great to be on board again with Monster Energy as the title sponsor and I’m glad to announce we will keep our association with Cosworth, Pro Circuit and Ohlins together with most of our existing sponsors.

“I am also looking forward to working with Motorex who already have a huge pedigree at GP level and I feel proud to lead Maxxis tyres to their first taste of serious GP racing. They will send an engineer and support to the races, and as they are part of one of the largest tyre companies in the World they will have no shortage of knowledge and resources to get the job done.

“The team staff will remain the same so from here on in we will have to get our heads down and make sure we leave no stone unturned to get Max and Mel ready for Qatar with a bike that they know can deliver the results expected.”

Racing Manager for the UK, Ross Burridge added – “I am thrilled to be able to welcome Steve Dixon and his team to the Kawasaki fold. We have been talking for some time, but to finally be able to announce our plans for 2015 in the MX2 class is very exciting.

“With Max recently achieving his first Grand Prix win so recently, we are eager to see him carry this form into 2015 right from the outset. We are also seeking our first British Championship title win for some time, so we’ll be working closely with Max, Mel and the team to try and achieve this.”