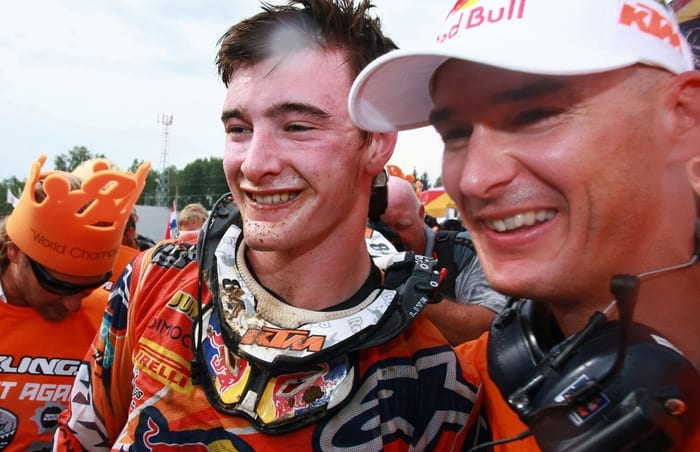 Ten-time world champion Stefan Everts is already hard at work with his altered role as part of KTM’s ranging motocross programme. The 41-year-old Belgian is now overseeing the next generation of talent to come through the Red Bull KTM structure – the factory team has won the FIM MX2 category since 2008 and in the premier class, MXGP, since 2010.

Everts will no longer be an ever-present part of the Austrian’s Grand Prix structure but this week spoke for the first time about his fresh responsibility to ensure that KTM maintain their lofty position at the top of the GP tree.

“The junior team is something I have been asking about for a long time,” he says of his project involving Davy Pootjes, Jorge Prado, Conrad Mewes, Kim Savaste and other teenagers. “We have a good set-up now with the factory GP side as Jeffrey [Herlings] has been fine for a couple of seasons and Tony [Cairoli] should be set for another two years so the time was good to look at the next step. I had been asking for the junior set-up but it hadn’t really come through. Now we have good support for the likes of Prado, Mewes and Savaste and I’m pleased we have a system where we can provide guidelines and a professional organisation for all of the supported kids. We have room and a place at the workshop in Belgium and we are prepping the race bikes.”

Everts will steer the Junior operation in numerous European series’ and national events with the assistance of his father, Harry. “My job will be to get the team and bikes running and then support the riders,” he revealed. “Give them all my experience and guidance and see what they need in order to improve. I’m really happy to have my father alongside me because he has so much experience of working with kids that I feel I can learn a lot from him. This [the team] is something new for me as well as getting involved in the organisational areas and the project.”

The former 125, 250, 500, MXGP and MX1 world champion remains an essential part of KTM’s racing staff roster. “He’s working with the next generation and for me that is so important,” says Sport Director Pit Beirer. “Where will our next champions come from? His work will have a direct effect. We have also just taken delivery of our ’16 bikes for racing and soon we will have to look towards 2017 and again that is where Stefan’s input is invaluable.”

#72 will retain a testing and development role for the factory (with WP Suspension tests as well), and even if he will be playing and assessing prototype machinery one minute he is dedicated to a more grass-roots approach to the Junior team. “We’ll use the base of the production 125 because it is already such a strong motorcycle,” he explains. “We’ll use stock suspension and try to keep the whole thing simple. We want to hold a ‘sign’ out in the paddock that is doesn’t all have to be about cost and it is possible to race and compete without all this tuning.”

KTM have made the re-organisation around Everts to also allow the Grand Prix icon to allot more time to the fledgling career of 10-year-old son Liam. “We’ll let him ride a bit more first,” Everts states. “We are looking at the full European Championship next year because he only did one race in 2014 and was lucky to be even able to enter that at the last minute. I don’t want to be too professional with him because he is still just a kid. It is important that he still has fun. I was so busy this year with the GPs that we couldn’t really do much and it was too much to combine two calendars. Now I will be doing all the European and Junior events and some local ones as well.”