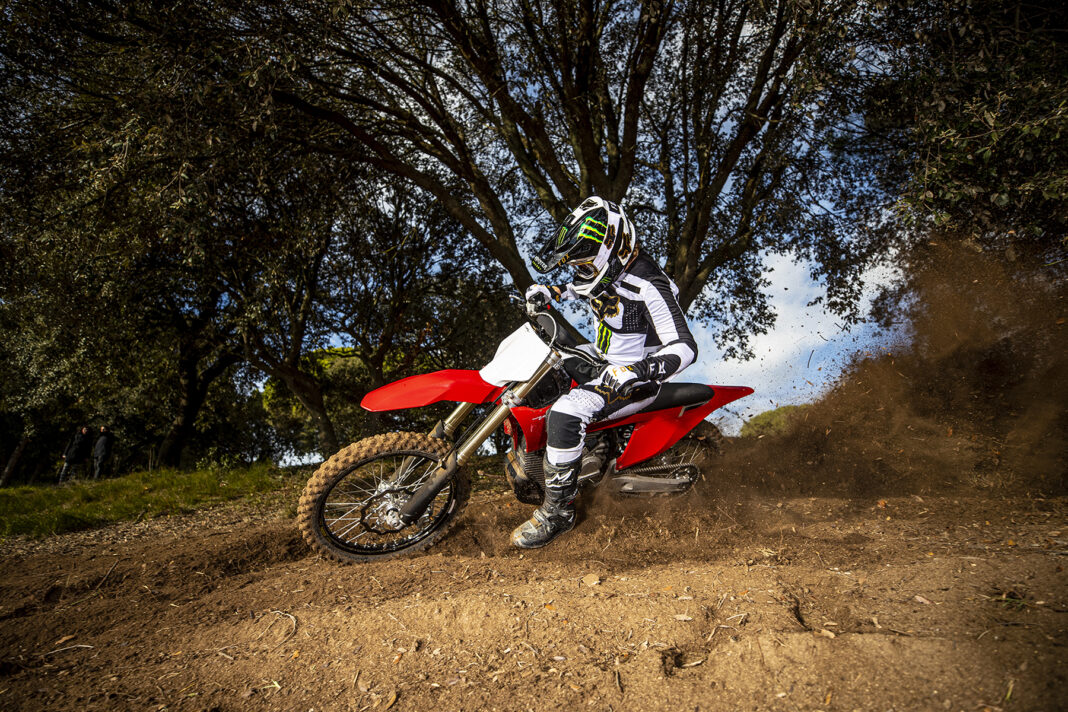 Stark’s Varg – unveiled this very morning – introduces a new level of technology not previously seen in either electric bikes or motocross.

With six patents in the approval process, the Varg immediately set a new level of technical specifications and performance not only among the growing off-road electric bike field but the entire motocross spectrum.

The Stark Varghas mixed fierce output and power with easy handling, lengthy range and full customization of the powertrain characteristics according to more than 100 different configurations, allowing the bike to assume the role of a 125, 250, 350, 450, 500, 650 four and two-stroke with all the nimble agility and sharp riding sensations intact.

Also featuring a powertrain of 80hp at 9hp per kilogram, and a ultra small chassis concept with use of materials such as carbon fibre, magnesium and aero grade aluminium, this makes the Stark Varg the most durable and advanced electric motorcycles in the industry.

With test riders Josh Hill and legendary Sebastian Tortelli putting the Stark through its paces with a two year development process, we can’t wait to get our hands on the machine to see what it’s capable of and how it compares to the current motocross models on the market. Offering a full six hours of trail riding off one charge, and a full moto at MXGP intensity with around a two-hour charge time, this makes the Stark incredibly versatile.

The silent heart of the Stark VARG is the prized engine and power, providing 80hp – 30% more than any 450 – and with double the amount of torque. The drivetrain is surrounded by Stark’s production battery system which is one of the most compact and ‘energy dense’ in the world, boasting 6kWh of capacity at less than 32kg.

The powerplant has been forged with advanced tech and ideas, such as the patent-pending magnesium honeycomb casing, ‘slippery-fingers’ cell holders, a pressure relief system and a one- sided powerboard configuring the battery cells.

The Stark’s ‘flying V’ system connects every cell directly to the tough, waterproof casing. This brings high conductivity to the air-cooled structure. The result is a very even and regular battery temperature that removes unnecessary weight for water or vapor cooling. The range from a full charge is similar to a 450 with a full tank of gas.

Low weight is key to the Stark VARG’s vivid handling. At 110kg the bike sets the best power-to-weight ratio of any model in any dealership. The chassis architecture uses the engine as a structural component, allowing Stark Future to build the lightest motocross frame in the world.

The composition of the frame (and carbon sub-section) brings the right blend of lateral, vertical and torsional flex and a lower center-of-gravity placement to optimize the Varg’s output on the terrain.

Japanese suspension experts Kayaba and Technical Touch need no introduction and the 310mm travel set-up can be tweaked between seven different stock settings depending on the size and bulk of the rider.