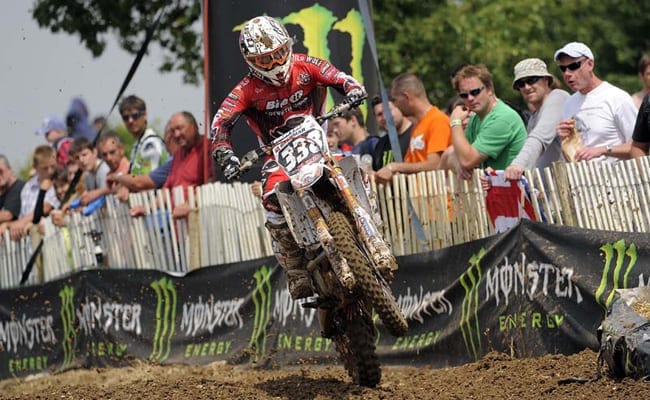 The French GP could not have a better ending with two home riders on the podium – Steven Frossard was the overall winner of the MX1 class and Gautier Paulin managed to be on the third step of the podium in MX2. The top of the MX2 rostrum was for Tommy Searle who obtained his first overall victory of the season.

In the MX1 class, Antonio Cairoli was second overall and Clement Desalle was third while David Philippaerts finished ninth after being third in the first heat.

It was the first time there was no KTM on the podium in the MX2 class as both Ken Roczen and Jeffrey Herlings were not that fortunate this weekend, finishing fifth and fourth respectively. Zach Osborne finished second and obtained his first podium of the season.

Monster Energy Yamaha’s Frossard commanded the first heat and he finished second in the second one. The French rider obtained his maiden MX1 overall victory at his home track and he is convinced that he can place his Monster Energy Yamaha at the top of the podium many more times from now to the end of the season.

Second overall was Red Bull Teka KTM Factory Racing MX1’s Cairoli who missed the overall victory by five points after being second in both heats. The Italian admitted that he does not feel fully fit but that he is happy with his result as he is closer to red plate holder Desalle.

Rockstar Energy Suzuki World MX1’s Desalle was a bit disappointed with his third overall position as he won the second heat with great authority. The Belgian did a great start in the first heat but he got stuck with a rider in the second corner and he crashed. Desalle could only be 11th so that cost him the overall win.

Kawasaki Racing Team’s Xavier Boog obtained his best result of the season this weekend in Saint Jean d’Angely being fourth overall ahead of Evgeny Bobryshev. Boog finished fourth in the first race but a mistake in the second race made him lose all the opportunities to be on the podium. However, he recovered from a 13th position to cross the finish line seventh.

Completing the top five was Honda World Motocross’ Bobryshev who missed the podium in the last laps of race two as Frossard and Cairoli overtook him when he was riding second. For the Russian it is a very good result as the French track was not of his favourite.

Ken De Dycker got a solid sixth position as he managed to keep a consistent rhythm in both heats. De Dycker has moved up three positions in the championship and he is now 12th.

Max Nagl, who was second in the point standings when he arrived in France, did not have a good weekend finishing seventh and ninth respectively. The German is now fourth in the championship tight in points with Steven Frossard.
Rui Gonçalves did not have a good start in the first heat and he finished 14th. However, he did an extraordinary second race and his fourth place made him finish eighth overall. David Philippaerts was very happy with the third place he obtained in the first heat but he was unfortunate in the second one and he was only able to finish 18th. The Italian left France with a bitter ninth overall position, followed by Estonian Tanel Leok.

Shaun Simpson could only be 13th whereas Ben Townley got a 16th final position due to a DNF in the second heat. Townley was having a great weekend on his comeback but when he was riding behind Nagl the German crashed and Townley went down and could not finish the race.

CLS Monster Energy Kawasaki Pro Circuit’s Tommy Searle obtained his maiden overall victory of the season in Saint Jean d’Angely as he did back in 2008 before he left to go to the USA. The British rider confessed that it was his worst GP so far but thanks to the great job his team made to change some settings of the bike he was able to be at the top of the rostrum.

For Bike it Cosworth Wild Wolf Yamaha’s Osborne it was the first time he was on the podium this season but he was not that happy for such second overall position as he missed the overall victory by just three points. Osborne explained that even riding with little fracture on his wrist, he can still obtain satisfactory results as today.

Monster Energy Yamaha’s Paulin was third overall being tight in points with Osborne. Paulin was very satisfied for having obtained the second podium of the season in front of his home crowd.

Fourth was Red Bull Teka KTM Factory Racing MX2’s Herlings, who made many mistakes during the first race and he could only finish seventh. Herlings succeeded in being second in the second heat but it was not enough to be on the podium.

His team-mate and current leader of the MX2 class Ken Roczen was fifth overall in France having won the first race. The German took the holeshot in the second heat but he had a big crash in the opening lap which made start again from the back of the pack. Roczen had some problems with his bike and he crashed again and he got a disappointing 11th position.

Nicolas Aubin did a very good performance in his home GP and he managed to finish sixth overall, followed by Arnaud Tonus and Joel Roelants. Harri Kullas got a solid ninth overall position and Max Anstie completed the top 10.