Home News Motocross Solid start from Lenoir as he steps up to the premier class... 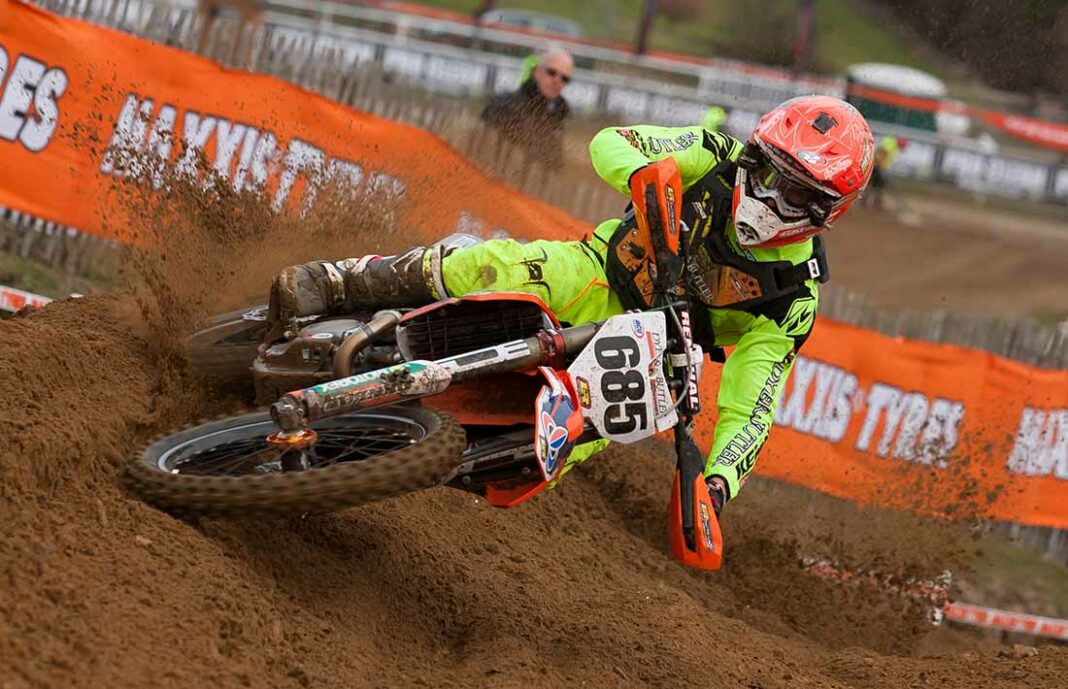 The Dyer and Butler KTM team travelled to the sandy circuit of Lyng, buried in the Norfolk countryside, this past weekend for round one of the 2016 Maxxis British Championship.

After achieving a career milestone of the MX2 championship title last year, Steven Lenoir stepped up to the MX1 class, so MX2 duties on the team were left to Liam Knight.

In his MX1 debut Lenoir posted the seventh fastest time in qualifying. Although the time left him in the lower half of the top 10, it was already quite clear that he had the potential to contend for a spot on the podium – his pace was competitive with those ahead of him. In MX2 Liam Knight posted the 12th fastest time.

Lenoir led the field into the first turn in the opening MX1 moto but an unfortunate mistake at the end of lap one cost him dearly, slipping to eighth.

The Frenchman spent the following laps stalking the riders ahead of him, but another bobble on the final lap cost him two more spots. When the chequered flag flew at the end of the 25 minute moto, he was 10th.

Although his start in the second and final moto wasn’t quite as good as the first, he still ended the first lap in eighth – #685 was seemingly more comfortable this time out, as he charged right up onto the cusp of the top five.

An incident with another rider on the final lap, which was simply out of his control cost him slightly as he dropped back to seventh. His consistent scorecard left him ninth overall, but only eight points back of fourth place.

“It was a tough day – in race one I had the holeshot, but went down while leading on lap one,” said the MX2 champ. “The bike setup wasn’t good and I couldn’t finish any higher than 10th.

“I got a top 10 start in the second moto, was in sixth and fighting for a spot in the top five for most of the race. On the last lap a rider rode right into me for the second time that day, so I finished seventh.

“Overall it wasn’t the best day; the track was really dry and slippery. I didn’t enjoy it, but we have a couple of weeks ahead to sort a few things out. We will be much better at Canada Heights.”

Knight’s day was just as eventful as a crash early on in his first moto put him right at the back of the pack on a track that was considered one-lined.

He put his head down and gained multiple positions each lap until he eventually moved into the top 20. Another crash would push him a little further back – his gruelling moto left him narrowly missing out on points in 21st.

Desperate to salvage something following the first moto, Knight ended lap one 16th in the second MX2 race and was one of the only riders moving forward in the laps that followed.

By the end of it Liam had moved inside of the top 10 to salvage a respectable amount of points on the day. After just one round, he sits 17th in the MX2 series standings.

Knight said: “Qualifying wasn’t too bad. The track was pretty fast, so the times were close; I was happy. In the first race I got a bad start, got taken down and run over, but I got back to the points. I then got taken out again, so the first race wasn’t a good one. I had a bad start in the second race, but got a 10th. That was okay, but I think I can do better.”