Home News Motocross Simpson shows he has the speed and fitness to run with the... 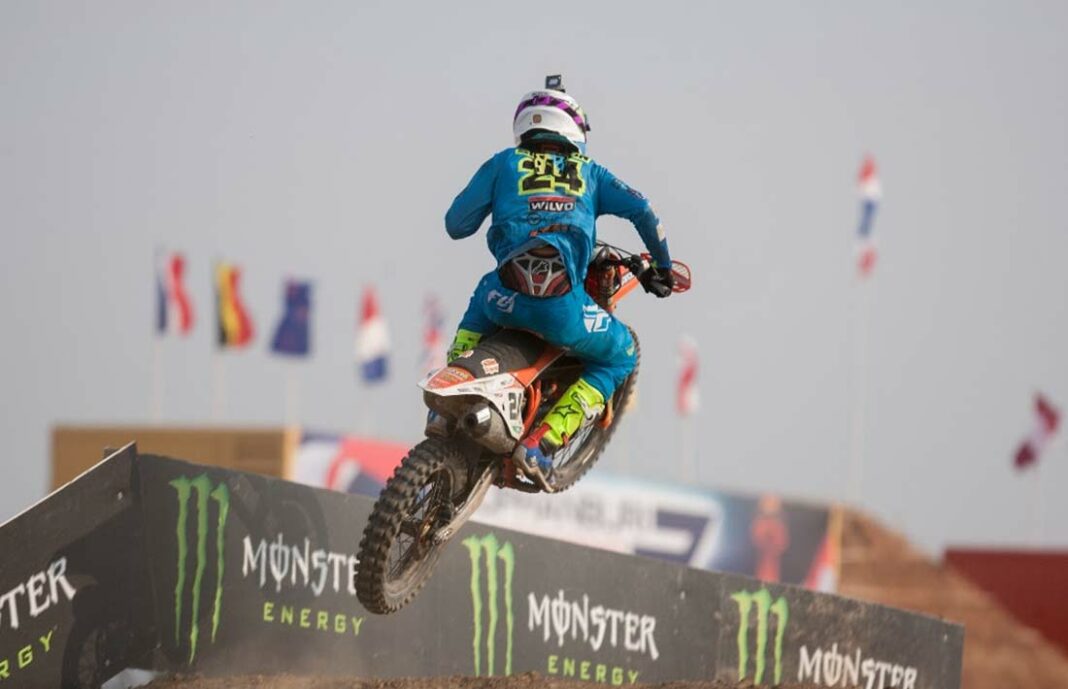 The notoriously tough GP of Thailand was again the setting for the second round of the FIM Motocross World Championship, just as it has been for the last three years.

The event, held at the new circuit of Suphan Buri this past weekend, was a test for all the riders, as temperatures soared to just below forty degrees.

Shaun Simpson logged a respectable time in time practice, despite a small fall, which left him with a good gate pick for the qualifying race.

Once that was underway, he rounded lap one seventh and immediately engaged in a gruelling battle that would spread across the duration of the heat. After dicing it up with some fellow former GP winners, Shaun crossed the line in ninth and immediately began preparing for Sunday’s two motos.

The first MXGP moto got underway at midday local time, in conditions that were considerably tougher than the day before. After starting right on the cusp of the top 10, Shaun found himself battling around that spot for a lot of the race. When fitness came into play and the riders had to dig deep, he started making progress and regained some of the spots that he had lost earlier in the moto. Simpson eventually crossed the line ninth and continued his consistent start to the season.

Although Shaun didn’t get the best start in the second MXGP moto, he made quick work of the riders around him and stormed into the top three. Refusing to settle, he made further progress and charged into second before setting his sights on the leader. #24 got caught up in a few tussles following this and a mistake cost him some vital positions, so he eventually crossed the line in sixth. Just like one week ago, he proved that he can challenge for wins in the premier class.

A ninth and a sixth on the day gave the popular British champ sixth overall and another 27 points to add to what he earned at round one. Following the first two rounds, he sits sixth in the championship standings and just a handful of points behind fifth place.

“Coming off a solid performance last week, I would say we were feeling pretty positive about this weekend,” said Shaun. “The track looked nice to begin with; I’d say it actually rode quite well yesterday, contrary to what some people said. I was slightly disappointed with the first moto and was definitely disappointed with my starts overall. They were terrible all weekend, so that is something that we need to improve on.

“The second race was obviously great. I managed to sneak around the first two turns, get into second or third position and then basically just did what I could do. I rode around at my own little pace and that was enough to secure me sixth, sixth overall and sixth in the championship. I think it was another solid weekend that we can build on. We are only a few points from the guys in front and still there or thereabouts. Overall I’m pretty pleased with it.”

Steve Turner commented: “It was another solid weekend from Shaun – I’m really happy. We are coming out of this GP with good points again. He struggled a little bit with bike setup in the first race, it just wasn’t quite right for the conditions of the track in that particular race. We changed a few things on the bike and he came back out fired up! The first two laps of moto two were absolutely amazing – he went from a pretty bad start to second in just over a lap!

“It was absolutely awesome. He was up at the sharp end battling with the big boys throughout the race, showing he has the speed and fitness, so I’m really, really happy with how he has performed through these first two GPs. We have come out of these two rounds with what we wanted, so roll on Valkenswaard.”