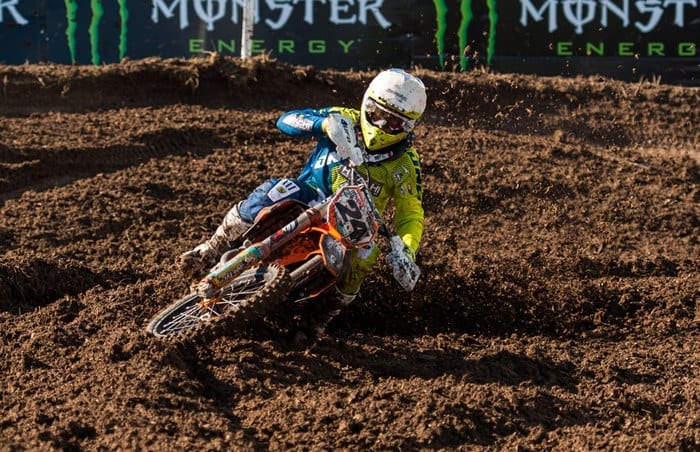 Fifth in the MXGP FIM Motocross World Championship and fresh from his second ever podium finish in the class last weekend in Lommel, Belgium, Shaun Simpson is currently one of the riders still to confirm his employment plans for 2015.

The Scot is likely to consider options from his current Hitachi Construction Machinery KTM team, Honda Motor Europe and maybe the works Kawasaki team if Ryan Villopoto turns down a chance to race MXGP.

Simpson can confirm his second British Championship title and first in the premier class, this weekend in Wiltshire for the penultimate round of the national series. It will be another bright spot in what has been a fantastic season for the 26-year-old and who is classic slow-burning and consistent talent in Grand Prix racing.

The winner of the last ever MX1 Grand Prix in 2013 was allegedly a target for Yamaha Factory Racing before they opted for MXGP rookie-for-2015 Romain Febvre. It means that Honda Motor Europe – who was also keen for Febvre’s signature – could now be turning to Simpson to fill their premium slot on the CRF450R with the 24 MX team.

If Ryan Villopoto decides against Grand Prix competition next year then the works Kawasaki crew will have to find capable replacements quickly to run their factory KX450Fs with title sponsorship from Monster Energy.

Although Tyla Rattray has been linked to the team (the South African rode for Kawasaki for five years in the AMA) it is rumoured that Steven Frossard will not spend a second term in green. This means that two slots could be available in the Holland-based outfit. Christophe Charlier and Simpson could be in the frame along with Rattray.

Frossard meanwhile is struggling to find a satisfactory contract elsewhere in the Grand Prix paddock and the latest gossip at the Grand Prix of Belgium even had the Frenchman considering a year away from the international spotlight.