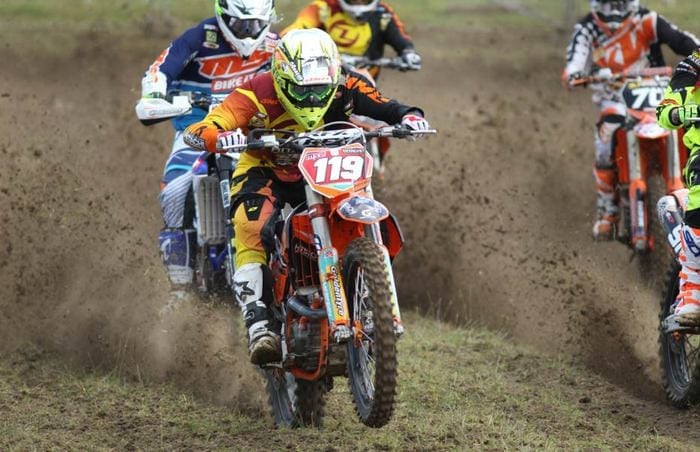 The overnight rain and heavy rain shower on the Sunday morning meant the track was left slippery during the morning qualifying sessions, but dried out during the day to produce some exciting racing.

In the MX1 class it was current Red Plate holder Shaun Simpson on the Hitachi Construction KTM UK who extended his lead in the MX1 class. Wilvo Forkrent KTM’s Matiss Karro closed to within three points of the series leader Mel Pocock (Hitachi Construction KTM UK) in the MX2 class after a hard day’s racing at Whitby. The MXY2 class saw Josh Gilbert continue to lead the championship by three points after three rounds.

Whitby was to be day when Wildcard riders dominated with Tommy Searle on the CLS Monster Energy Kawasaki taking three fairly comfortable wins in the MX1 class. Second overall on the day went to Shaun Simpson after taking three second place finishes, ahead of another guest rider for the event, Frenchman Loic Rambaut on the Apico LPE Kawasaki in third overall.

With just three rounds remaining Simpson now holds a 61 point advantage in the MX1 class over Jake Nicholls (Wilvo Forkrent KTM) who had a torrid day with two crashes in the first and final moto which ended up with him being sidelined with a badly broken finger. His race long battle with Simpson in the second moto earned him a total of 22 points on the day which effectively has ruined his championship hopes as he now faces a battle to overcome his latest injury.

In the MX2 class Max Anstie on the Bike It Cosworth Yamaha looked to be heading the same way as Searle, until his machine expired halfway through the final moto. This handed the overall MX2 win to Karro who went 4-3-1 to half the championship deficit on Pocock who returned 3-4-2 results. Steven Lenoir on the Dantec Husqvarna UK made his best showing since the opening round to take third overall on the day after forcing his way through to a pair of second places backed up by a sixth.

In the MXY2 class it could not have been closer at the top with just two points separating the top three on the day. A win and a third place was enough to put Liam Knight on the Dyer and Butler KTM on the top step of the podium with a race win and a third place from Oliver Osmaston who recorded two consistent second places. A fourth backed up by a final moto win gave championship leader Josh Gilbert on the St Blazey MX Honda third on the day which ensured he retained the Red Plate as series leader.

The next round of the championship takes place at the FatCat Moto Park near Doncaster on July 20.