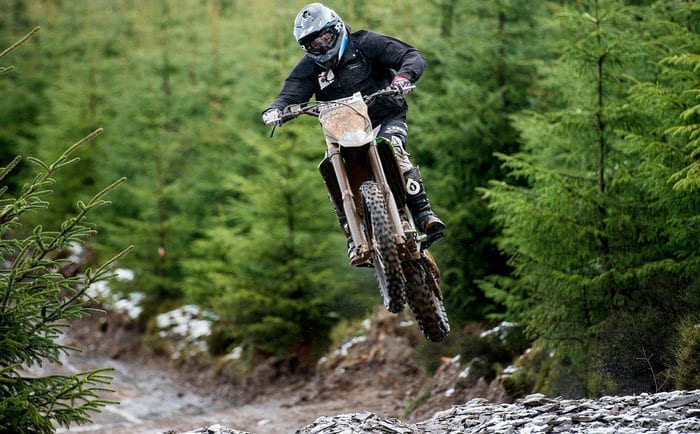 The world’s leading tyre manufacturer recently enlisted the help of seven-time Dakar Rally competitor Mick Extance and his son Adam to put Bridgestone’s new Battlecross X30s through its paces at a specially created track in the Welsh mountains.

The tyre was scrutinised in the toughest conditions at Extance’s off-road school in Powys, completing 50 laps of a mountain-side course, with regular checks for tread wear and degradation.

Mick, who was joined in testing by Enduro rider Graham Weaver, said the performance of the tyre was incredible.

“The Battlecross X30 was definitely more stable than anything I’ve ridden before, which is saying something.

“The durability of the tyre was incredible, too. For a motocross rider, this makes one hell of a difference when budgets are tight. It saves seconds on lap times and significant sums of cash on replacements.”

Riders at Mick’s off-road school were also asked to ride the Kawasaki KXF250s, with no prior knowledge of the new tyre. They returned unanimous verdicts on the X30s, which they said felt ‘grippier’ and more stable than other products that they had been riding on during that day.

“The X30s are up there with the best tyre I have ever ridden on. They are so much more stable and the key is, you can change your line quicker. This makes a big, big difference.

“On the X30, you can come into the off-camber corners with so much more confidence. It doesn’t slide, or fold.

Bridgestone’s motorcycle product manager Gary Hartshorne said: “This was the first time we had tested the X30, so we genuinely didn’t know how it would perform.

“The one pre-requisite we agreed upon before testing was that Mick and Adam would be impartial and independent throughout, with no bias towards the product.

“Naturally, we were delighted with their feedback. It’s clear that the Battlecross X30 is a fantastic tyre, offering grip, durability and stability.

“Following these tests, we are confident that it will be an extremely popular choice for motocross riders in 2014.”