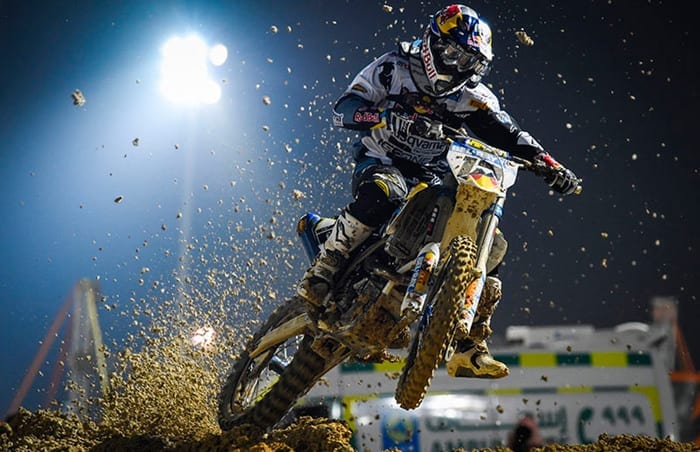 It was an emotional beginning to the start of what is essentially the most anticipated season in the history of the FIM Motocross World Championship, MXGP 2015.

The recently named ‘Dad’ of a beautiful baby boy Red Bull IceOne Husqvarna Factory Racing’s Max Nagl and the kid who has been on the recovery road from hell Red Bull KTM Factory Racing’s Jeffrey Herlings both surprised everyone, including themselves, with impressive double victories.

We learnt a handful of things about Red Bull IceOne Husqvarna Factory Racing’s Max Nagl tonight. Firstly, he can start. The German pulled off two very impressive Fox Holeshots, which has given him the early advantage in the race towards the 10,000 Fox Holeshot purse.

Secondly, he’s fit, fast and fierce – he led ALL 36 laps even despite the immense pressure from previous MXGP of Qatar winner Clement Desalle in race one. Thirdly, he is and will be a solid part of Husqvarna’s re-rise to FIM Motocross World Championship glory. And lastly, he is very humble, admitting he even surprised himself tonight.

Meanwhile the all-new super smiley version of Rockstar Energy Suzuki World’s Clement Desalle looked on form out on track tonight making some bold statements when he passed and pulled away from two of MXGP’s hottest players Antonio Cairoli and Gautier Paulin.

Desalle said: “I am really happy with my riding at the moment, I feel good in my body and also on the bike. In the morning I will go home because I think it will benefit me more to do this than it will to stay over in Thailand.”

Team HRC’s Gautier Paulin couldn’t be missed, not only because of his super bright Fox kit, but also because of his unique BMX style which happened to look even more awesome than usual on the man-made jumpy circuit here in Losail.

While the Frenchman had a lot of fans backing him for the win this weekend, the strong Frenchman was satisfied with his 4 – 3 performance saying: “I’m really happy to start the season like this, it is always good to be on the box, actually on the top, but it is still a long season, so it is good to start with a third”.

What may come as a surprise to many, especially after his dominating performance in the Qualifying race yesterday, is the fact that Red Bull KTM Factory Racing’s Antonio Cairoli didn’t make the podium.

Although, in saying that, the Italian did tie with Paulin for third but was knocked off the box with Paulin achieving the better result in the final race. Despite only finishing up the weekend in fourth, you can rest assured that Tony knows it is a long championship and already looking fast and aggressive.

It was a feeling of deja vu for Yamaha Factory Racing’s Jeremy Van Horebeek who put together two fifth place finishes for fifth overall just as he did in 2014. The Yamaha rider, who admitted in the Press Conference earlier this week “I want to do better than I did last year, and there is only one place more” was content with fifth today as he knows better than anyone, it CAN get better. Just look at last year’s eleven round podium streak.

Also representing Yamaha Factory Racing and more than worthy of a mention is MXGP class rookie Romain Febvre. The young Frenchman caught our attention as one to watch after footing it with some of the most seasoned riders in both MXGP races.

As for Monster Energy Kawasaki Racing Team’s Ryan Villopoto, it was just one of those events you just have to put down to experience. Although we are sure RV didn’t get the result he anticipated, we have to admit his one of a kind riding style was so cool to watch. The American took to Social Media after the event accepting, “It was a tough weekend”, but remaining positive in ending with “but we’ll get there”.

It was one of the biggest displays of emotion we have ever seen from Red Bull KTM Factory Racing’s Jeffrey Herlings as he genuinely broke down in tears only moments after taking his second victory for a perfect start to the season.

“You can’t believe what was going through my head on the last laps, I was seeing the craziest things”, the kid known as The Bullet said, “I have just had a lot of bad luck in the last months, struggling with my leg for a long time, seeing this doctor, that doctor, and onto the next doctor, but finally it’s okay and I can finally ride. Yeah, my riding wasn’t that great but for me it wasn’t even about that. I am just so happy to be here.”

The most impressive performance of the night had to be that of Standing Construct Yamaha Yamalube’s Julien Lieber. The tiny Belgian rode absolutely amazing in both races to stand on the FIM Motocross World Championship podium for the first time in his career.

He modestly said: “It was definitely not easy for me this weekend, but in the race my riding was good and Dylan crashed in the second race, so I got third in the first race and could get second in the last race. I am looking forward to Thailand, I know it will be difficult to do the same but I will try my best and we will see.”

Monster Energy Kawasaki Racing Team’s Dylan Ferrandis was undoubtedly making a MX2 title run this weekend as he charged unbelievably hard in both races for third overall. Race two in particular was gnarly for the Frenchman who bounced back from a gnarly crash adding a fourth place finish to his second place finish of moto one.

Meanwhile Honda Gariboldi’s Tim Gajser wrapped up fourth despite having a horrendous crash in race two. Nevertheless, the Slovenian who is making a name for himself as a warrior, battled on to finish seventh which was in addition to his fourth in race one.

Rounding out the top five, Wilvo Nestaan Husqvarna Factory Racing’s Aleksandr Tonkov wound out the night strong with a thrilling run at Julien Lieber in the final race for second, but couldn’t quite make it happen and was forced to settle for third.

The next round of MXGP will take place next weekend, March 08, in Nakhonchaisri, Thailand.