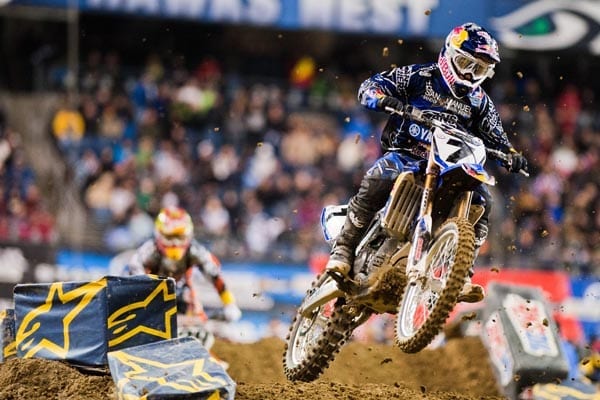 James Stewart wins in Seattle as the AMA supercross season heats up..

The Fabulous Five have become the Furious Four as rookie Trey Canard became the first to fall out of the title race. The factory Honda rider crashed during testing and broke his femur which means the reigning 250F motocross champion is staring down the barrel of a six week layoff which puts him out of the supercross title race.

For the four remaining contenders it’s business as usual in Seattle. Ivan Tedesco takes the holeshot but he has James Stewart and Chad Reed for company. The two title contenders immediately blitz by Tedesco for the lead and begin a short battle before Stewart manages to break away. With Stewart was trotting off into the distance, Kevin Windham steps up to represent and the silky-smooth veteran thrives in the deep Seattle ruts making short work of Tedesco and showing every intention of taking the battle to Reed.

Further back Ryan Villopoto and Ryan Dungey are having a torrid time. Dungey falls on lap one while series leader Villopoto gets involved in someone else’s first turn shenanigans and finds himself at the back of the pack. Undaunted, the two youngsters refuse to be flustered and just crack on with the task at hand carving through the field.

When it’s all over it’s Stewart who takes the win ahead of Windham, Reed, Villopoto and Dungey. Villopoto still leads the championship but now by just six points from Reed who’s a point ahead of Dungey who’s two points ahead of Stewart – nine points separate first to fourth.

The West Coast 250F championship reconvened this week. Josh Hansen was looking good until a practice crash dropped him on his previously broken hand – it may have had two months to heal from surgery but the crash did it the power of no good. Cole Seeley took the holeshot ahead of contenders Broc Tickle and Hansen but the wounded Hansen soon found himself fighting a rearguard action against Tyla Rattray, Kyle Cunningham, Martin Davalos and the third title contender Eli Tomac.

Recovered from concussion and in no mood to mess around Tomac makes short work of cutting his way through the pack chasing Hansen, passing the ailing Pro Circuit star and immediately set after Tickle. His collarbone healed, Tickle is suffering from arm pump and Tomac’s able to close him down to take second but by that point Seely is well down the road. Tickle’s third vaults him into the championship lead, three points ahead of Hansen who takes a brave sixth, with Tomac now seven points off the lead. Seely’s win brings him up to a distant fourth in the series with just one round left.