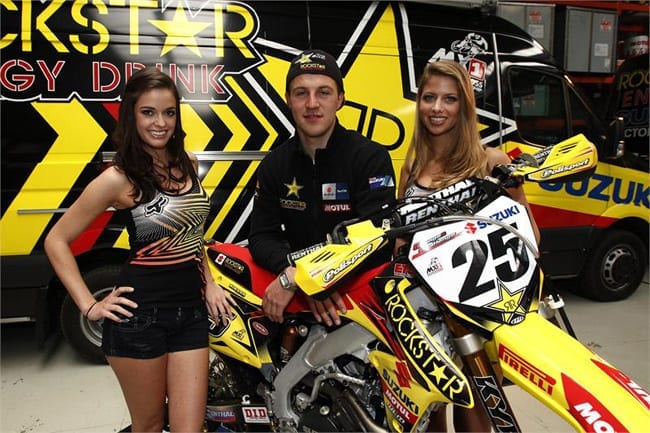 Rockstar Energy Suzuki’s 2012 MX1 and MX2 teams unveiled their factory RM-Z450 and RM-Z250 machines and riders to world media in a special team launch at their headquarters in Belgium in the lead-up to the opening GP at Valkenswaard in Holland.

With the Dutch GP just a stone’s throw from the Geboers Racing Promotion (GRP) Lommel-based workshop and facilities, the launch was attended by around 100 media and guests for breakfast and a presentation by Rockstar Energy Suzuki World MX1 Team Manager Eric Geboers and Team Principal Sylvain Geboers.

New for 2012 is the addition of Rockstar Energy Drink as the principal sponsor to the new MX2 team which will run under the Rockstar Energy Suzuki Europe banner. Team Manager Thomas Ramsbacher explained that the focus of the team is to help develop young and talented riders like Bulgarian Petar Petrov and Finland’s Harri Kullas in the MX2 world championship. The media also got the opportunity to meet talented Spanish rider Jorge Zaragoza Beltran who will compete in the EMX 125 championship aboard the Rockstar Energy RM125.

Rockstar Energy Suzuki’s World MX1 team presented its two riders for the 2012 campaign with Belgian Clement Desalle onboard for the third consecutive year and Estonian Tanel Leok in his first year aboard the factory supported Suzuki RM-Z 450.