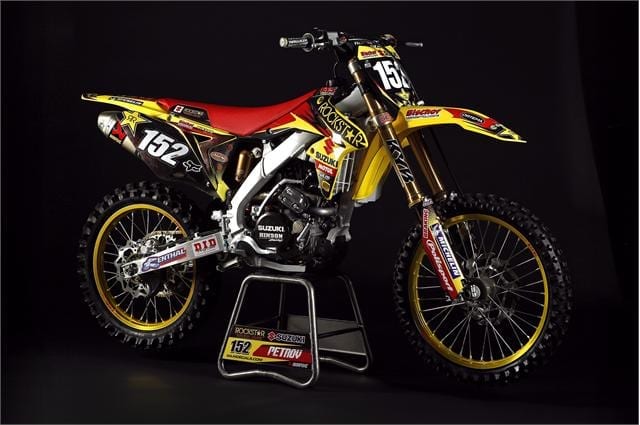 Some interesting insights into the Rockstar Energy Suzuki RM-Z250 and the German team’s R&D department via the ‘Team Suzuki Press Office’.

We get a lot of press releases round here and, well, some are better than others but this little torch beam shone onto the factory RM-Z250’s provides a bit of light Friday reading. Looking at the development programme this year, how the team operates, new regulations for next year and a smidgeon of insight into the 2013 model it’s worth a few minutes of your time, whether you’re a Suzuki pilot or not.


Rockstar Energy Suzuki Europe riders Jeremy Seewer, Jorge Zaragoza and Brian Hsu have some tough acts to follow with the likes of Ken Roczen as a former team rider. With just the final third of the season ahead of them now, the team’s technical co-ordinator Jens Johansson talks factory RM-Z250 evolution…

Jens, what were the priorities and parameters for the work on the RM-Z250 for 2012?
“We didn’t do much with respect to performance development but there were some changes to the cooling system and that meant using components – radiators and hoses – from the 2013 production bike. It meant using and testing pre-production parts with a goal of assessing better cooling efficiency and we should be able to race with standard size radiators thanks to this new system. Secondly we had a new ECU with a new coil. Before it was integrated in the spark plug cap like many other bikes but now we have gone for an external system like on the RM-Z450. The reason for this is linked to less resistance and efficiency in the coil for spark power. This is basically what we have worked on coming into this season because the rest is pretty much what we had from the 2011 campaign where it was already a very competitive package.”

So going somewhere with the heat and altitude of Mexico provides great race conditions because you are hitting extremes?
“I know your train of thought there and I agree but we actually had an overheating problem in Mexico because of that cement-like mud, so it didn’t work out like we hoped!”

But that’s part of the development process isn’t it?
“Of course! We learnt a lot from that race and in conditions like those. It is not nice to DNF like we did with Harri Kullas, but both riders had bad starts and pushed through the field and in doing so the radiators were totally blocked. We then went to Brazil with very different weather conditions but still a huge volume of mud. The guys were a little bit more on their own on the track but both did finish. We got a lot of information and pointers from that trip, that’s for sure.”

So 2012 is more about fine-tuning the RM-Z250s for Harri and Petar?
“Yes, that was a big part of the work. In 2010 when we had an extremely good rider and a second very good rider, their riding styles – and even weight on the bike – were very different. Last year Valentin Teillet was also very light and we’ve gone from a racer who was around 60 kilos to around 75 and even above 80 as in Petar’s case. Anybody can understand that a rider who weighs more than 80 kilos needs more power or can handle a more aggressive bike than someone who is 60. We haven’t changed the RM-Z250 much but obviously we have had to work in a different direction compared to what we could do with Valentin last year. He was also injured a lot and when he was with us he wasn’t really fully fit at any stage and that effects how you set-up and develop the bike.”

Suzuki was one of the first to push ahead with fuel injection and electronics in MX2. Has the development curve on the ECU increased dramatically over the past four years?
“No, no. With these bikes the steps are very small, as are the possibilities of what you can do from a stock bike to a GP bike. When you have a new model, like we did with the RM-Z250 that was overhauled with the FI in 2010, then the first six-nine months saw many steps – and pretty big ones – but that development curve flattens and then it becomes about detail changes. The next large gains will be with another model. We have a good bike; but obviously you can still improve and we are working on that for next year. We have new noise regulations for 2013 and that does make a difference.”

Will lowering of the decibel limit for 2013 pose a technical challenge?
“We are already planning and we have started to make some small adjustments and try things that are independent of the exhaust, but it is clear that the exhaust manufacturers will play a big part in this. We will probably have to continually chip away and play with engine mapping and possibly change the character of the way we run the 250 engines, like having to drop the revs for example to make the limit. It is too early to say but it will be a lot of work and the bikes will be different. They will sound different and in my opinion be set up in an alternative way.”

Do you have much input in the RM two-stroke bikes of Jorge (Zaragoza) and Brian (Hsu)?
“It takes some of our time but nothing away from MX2. The programmes are running parallel. We don’t have factory support for development on the 125 and 85 so it is done by GRP in Belgium. Jorge’s engine is done in-house with a full-time mechanic and he has factory suspension. The 85 is run out of Germany and Italy with Brian’s father and his support. We take care of the logistics and parts as well as servicing of the 85 engine. We have a good system and I am happy with how it is running there and how the bikes are doing. We are under no illusions who we are up against and there is basically just one manufacturer who is the main competitor in both categories. I don’t want to sound cocky but I think with Jorge and Brian we are one of the only ones who can beat them. We are the underdog but it gives great satisfaction to see that we can compete with them and also beat them. So the motivation to do that is very high and we hope to make a good show at the European final races at Matterley Basin in the UK in August and then the World Championships at Sevlievo the next week.”