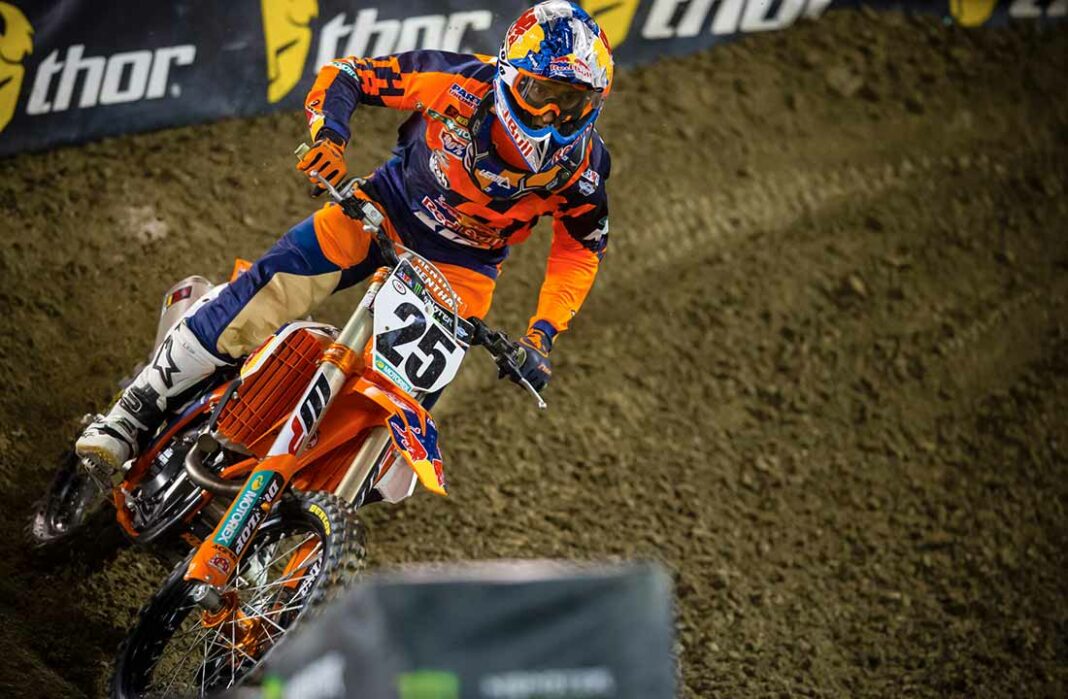 Troy Lee Designs/Red Bull/KTM’s Justin Hill was impressive en route to his first win of the year in the Eastern Regional 250SX Class, on a night when the championship leader did not compete.

Red Bull KTM’s Ryan Dungey scored his fourth SupercrossLive.com Holeshot Award of the season to start the 20-lap 450SX Class Main Event before giving way to GEICO Honda’s Justin Bogle, who then lost control through a rhythm lane and crashed out of the lead, collecting Rockstar Energy Husqvarna Factory Racing’s Jason Anderson and others. Dungey reassumed control of the lead following the incident.

Later on the opening lap Monster Energy Kawasaki’s Eli Tomac made an aggressive pass on Dungey to take over the lead, which also allowed Roczen to follow into second in hot pursuit of the lead. The German rider applied heavy pressure on Tomac and soon took the lead on Lap 1.

Dungey, the championship leader, looked to strike back at Tomac and dove past on Lap 4 to briefly take over second, only to be passed back in the very next corner. After multiple attempts Dungey was able to make the pass stick on Lap 8, while his Red Bull KTM team-mate Marvin Musquin overtook Tomac for third on Lap 9.

While running second on the 14th lap, Dungey made a mistake that caused him to go down, benefiting Musquin who was able sneak by for second as Dungey remounted in third. The defending 450SX Class Champion continued to push hard in an effort to catch his team-mate, but was unable to make up the ground he lost.

A blistering pace set by Roczen out front carried him to his third 450SX win of the season unchallenged, ahead of the Frenchman Musquin in second and Dungey in third.

“It was an awesome race, the conditions were tough and my bike worked flawlessly,” said Roczen, who now has three wins over the last six races. “This is my first win in Toronto, so lets see if we can keep the ball rolling heading into Detroit next weekend.”

Musquin’s runner-up finish was his third straight podium result. While Dungey’s third-place effort ended his record streak of top-two finishes at 20 races, he set a new all-time record for consecutive podium finishes at 26, surpassing the previous record set by Monster Energy/360fly/Chaparral/Yamaha Factory Racing’s Chad Reed during the 2003 and 2004 seasons.

“I had some time to make up on Kenny [Roczen], but washed the front end while trying to make a push,” said Dungey. “From there I did the best that I could and was able to come away with a podium.”

Dungey remains in control of the 450SX Class championship standings, currently leading by 34 points over Roczen. Anderson, who recovered from his crash on the first lap to finish ninth, sits 58 points behind in third place.

On the opening lap, Troy Lee Designs/Red Bull/KTM’s Shane McElrath moved past Bisceglia to take the lead, with Monster Energy/Pro Circuit/Kawasaki’s Tyler Bowers moving into second and Hill into third. The battle intensified on Lap 2 as Hill moved his way past Bowers into second, and closed in on the race lead.

McElrath’s advantage continued to shrink as his team-mate inched closer, and eventually Hill found his way around to take over the lead on Lap 3. While Hill started to open a gap, what appeared to be a flat rear tire forced McElrath to the mechanics area for repairs on Lap 6. That moved Bowers into second and Bisceglia third. Bowers then encountered some misfortune of his own, crashing out of second and dropping down the running order, which allowed Bisceglia to take over second and Cycle Trader/Rock River Yamaha’s Benny Bloss to move into third.

After overcoming a 19th-place start following the crash in the first turn, Martin battled his into third on Lap 8 and proceeded to move up another spot on the following lap by passing Bisceglia for second on Lap 9.

Hill went on to claim his third career 250SX Class victory, with Martin’s come-from-behind effort landing him in second. Bisceglia rounded out the podium in third.

“This [win] is a big deal for me. It’s been a while since I last won,” said Hill. “It was a very difficult track and I was lucky to get through the start clean and bring it home.”

Martin’s runner-up effort allowed him to take over control of the Eastern Regional points lead, one week after claiming his first win of the season. Rockstar Energy Husqvarna Factory Racing’s Martin Davalos entered Toronto as the championship leader, but did not compete due to personal reasons.

“The laps and hard work during the week paid off tonight,” said Martin. “We were able to move forward after the crash, which helped us leave with the red plate. It’s a bummer Davalos was unable to race tonight.”

Martin now holds a two-point lead over HIll in the Eastern Regional standings, while Stewart, who finished sixth, sits third, 10 points back. Davalos dropped from first to fourth, 20 points out of the lead.

The 2016 Monster Energy Supercross season continues next weekend with the championship’s annual visit to Ford Field in Detroit on Saturday, March 19.